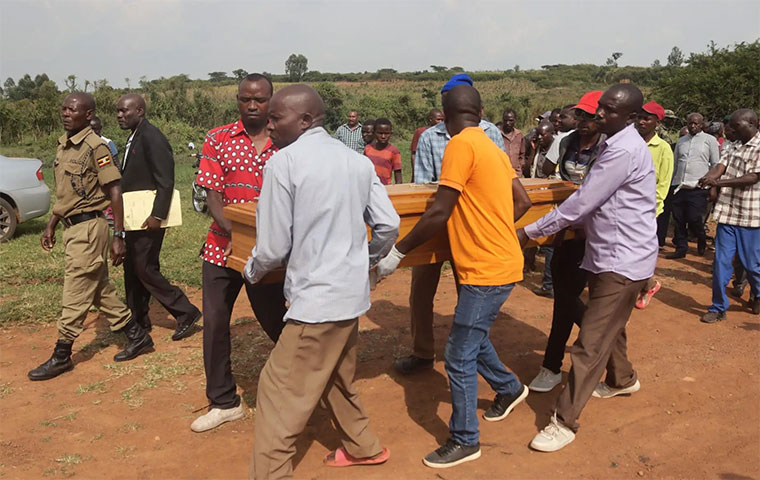 Relatives receive the body of Turyahikayo

Rwandan authorities have handed over the body of a Ugandan businessman who was gunned down for suspected smuggling last week amidst protests from locals.

Rwandan security opened fire on Turyahikayo just about 50 meters inside Mpororo village, Kashekye parish in Kamwezi sub-county. He was returning from Rwanda where he had gone to sell plates and fled back into Uganda when the Rwandans tried to apprehend him. After shooting the deceased, the Rwandan operatives crossed into Uganda and carried his body back to Rwanda.

Tempers flared when Gasana claimed that Rwandan operatives shot dead Turyahikayo in Tabarwe inside Rwanda in self-defense. He claimed that Turyahikayo together with five others who were armed with stones and other traditional tools tried to harm the operatives who had intercepted them prompting them to fight back.

Kyamuzigyita, Kamusiime, and Kakwerere couldn't have any of this. They tasked their Rwandan counterpart to present evidence showing that Turyahikayo indeed attempted to harm the operatives. They also demanded an explanation as to why Rwandan security authorities crossed to Ugandan soil, shot dead a Ugandan, and carried his body back to Rwanda. They questioned why Rwandan government authorities always have the same answer since shootings of this nature started in 2019.

As Gasana struggled to give answers, Kyamuzigyita, Kamusiime, and Kakwerere demanded that he makes an apology to Uganda and explain if Rwanda will compensate the family of the deceased. Gasana declined to apologize and instead hailed Rwandan security for protecting its borders.

Locals led by Abel Rubahika, the Mpororo village LC I chairperson where the incident occurred protested the repeated shooting of locals at the Uganda-Rwanda border by Rwandan security operatives. They argued that about six people have been shot by Rwandan authorities since 2019.  They also demanded that Rwanda compensates the family. Locals threatened to take the law into their hands against Rwandan nationals, in case Ugandan authorities fail to do anything to stop the shootings.

At the 6 pm burial, locals raised placards demanding that Uganda takes measures of stopping Rwandan security operatives from shooting Ugandan civilians. But, Kakwerere and Kyamuzigyita called for calm, saying that the matter will be discussed. Turyahikayo is survived by four wives and 12 children.

Incidents of shooting suspected smugglers by Rwandan security authorities along the Uganda-Rwanda border were rampant during the border closure in 2019-January 2022 on orders of the Rwandan government. Then Rwanda President Paul Kagame accused Ugandan authorities of spying on Rwanda, abducting Rwandan citizens and locking them up in non-designated areas, as well as hosting and facilitating dissidents who have declared war on the Kigali administration.

Rwanda also issued a travel advisory to its nationals against travelling to Uganda, saying their safety was not guaranteed. In May 2019, Rwandan security shot dead John Batista Ncherengye, a Rwandan national from Nkoma cell in Ntabarwe parish in Nyakatere district, and Alex Nyesiga Atuheire, a Ugandan national and resident of Nyakabungo village in Rukiga district at Hamisavu trading centre in Mpororo in Kiruhura village in Kashekye parish in Kamwezi sub-county.

The incident happened when Rwandan soldiers crossed into Uganda to arrest a suspected Rwandan smuggler who tried to cross to Rwanda with secondhand clothes. The smuggler had fled back to Uganda after realizing that Rwandan security was in hot pursuit.

A scuffle broke out when Rwandan soldiers impounded a motorcycle, registration number, RE736G, which the smuggler was using but met resistance from residents who accused them of crossing into Uganda illegally. It is during the scuffle that one of the Rwandan soldiers pulled out an AK-47 rifle that was concealed in a long jacket and shot the two to death. Uganda police opened fire to disperse the Rwandan soldiers who were trying to carry away the deceased’s body.

0 #1 Kabinda 2023-01-25 00:37
Surely this reporter could do better. You claim the deceased was not smuggling at the same time you call him a smuggler. You say the Rwandese shot him in Uganda and took the body back at the same time you say Uganda police shot at the Rwandese security trying to take his body…So which is which?
Report to administrator
0 #2 kabayekka 2023-01-25 09:44
Kabinda you are confused indeed. These officials on both sides of that unfortunate border are African political hooligans who are bent on slaughtering humanity. Especially if the victims have a different political belief from their own!.
Report to administrator
0 #3 Lakwena 2023-01-27 16:24
In other words, according to the Hammurabi Law of an eye for an eye, and life for life; at this rate, when will the Ugandan Armed forces begin to gun down Rwandese illegal immigrants and/or businessmen/women and hand over their dead bodies to the Rwandese Authority?