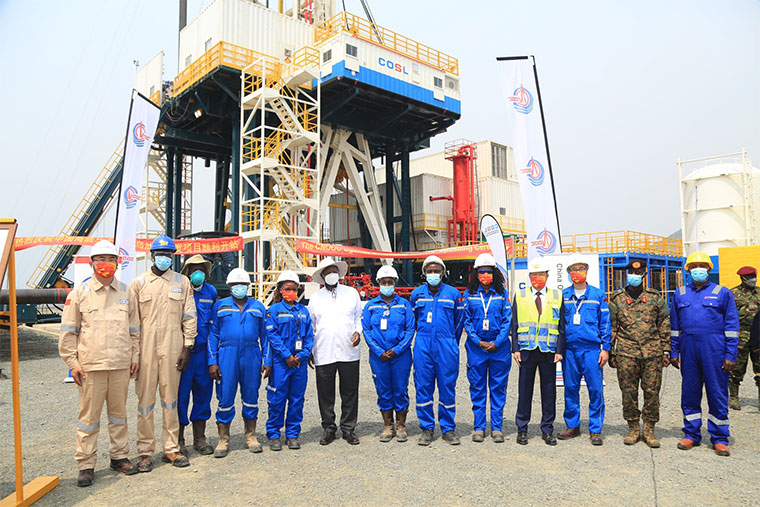 Museveni commissioned the rigs in Buhuka, Kikuube district today Tuesday in an event which has been described as one of the major milestones towards the country's target of producing oil in 2025. Cnooc plans to use the commissioned rig to drill part of the 31 well pads from which oil will be extracted once production kicks off. The president said Uganda will continue to develop its oil and gas resources alongside other sources of energy.

"We shall develop our oil resource but also develop solar energy. Solar energy is our ancient energy here for Africans...We're going to use the solar power, the wind power, the hydropower but also the oil as we develop the others," said Museveni.

The president used the occasion to allay fears that the oil being developed by Uganda may not be marketable given the debate to shift from fossil fuels to cleaner energy options.

"And even when the others are fully developed, still petroleum is needed for other products not necessarily for fuel. The shirt I'm putting on has got some polyester in it and polyester is from petrol. We need some tan to make kolasi (tarmac) to make roads, we need the fertilisers, nitrogen from ammonium - all these are from petroleum. So we can use the petroleum responsibly. The other ones cause problems for the world in global warming because of greed. They are greedy for money, they don't think about anything else, they are the ones who cause the world those problems," added Museveni.

The commissioning of the drilling rig for the Kingfisher Development Project (KDF) has sent excitement among sections of Ugandans. Some think oil production should begin in the coming weeks. Some have wondered why Cnooc should begin drilling when the construction of the refinery meant to refine crude oil from King Fisher and Tilenga projects has not begun.

And equally when the East African Crude Oil Pipeline (EACOP) meant to export crude to the international market has not taken off. Others have asked where the crude oil will go in the absence of the two commercialization projects inform of the pipeline and the refinery.

The executive director of the Petroleum Authority of Uganda (PAU), Earnest Rubondo explained that in order to produce the volumes that are expected from the Kingfisher and Tilenga projects, drillings of the wells for production have to be done in advance.

According to Rubondo, the drilling that has been commissioned is for the first production well that will produce oil in the Kingfisher field. Construction of the Kingfisher project is being undertaken by a joint venture of China Offshore Oil Engineering Company and China Petroleum and Construction Corporation.

+1 #1 kabayekka 2023-01-25 10:45
All this is old fashion political hot air. Why does this happy African officialdom do not stop stocking up their big fossil fuel motorcade and and instead start using electric powered vehicles.

Many countries are busy trying to reduce hydro-carbonated fenergy fuels. Where in these modern times is Uganda going to sell its dirty environment product at a profitable international price and then pay its mounting debts of 40 years and counting?
Report to administrator