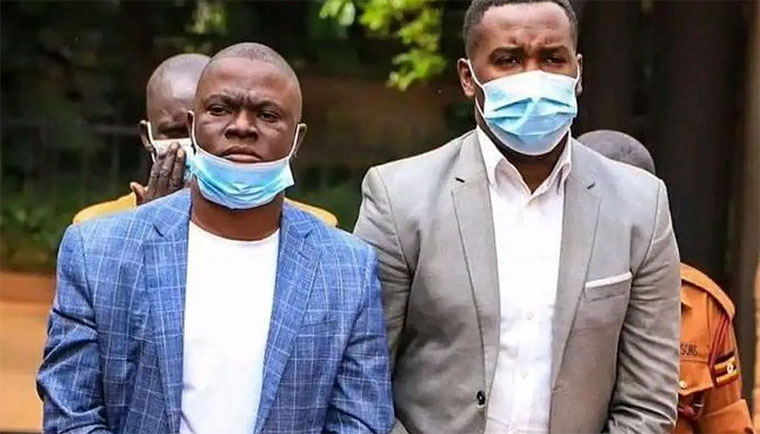 Masaka High court has ordered prison authorities to provide specialised treatment to Makindye West MP Allan Ssewanyana so as to enable him to recover faster such that he stands trial.

Resident judge Lawrence Tweyanze issued the orders today Tuesday during the hearing of the second bail application by Ssewanyana and his Kawempe North counterpart, Muhammad Ssegirinya, who are battling terrorism charges.

The legislators applied for bail through their lawyers led by Erias Lukwago on the grounds of ill health, saying they can't access the required medical attention while in prison. Lukwago told court that their clients, especially Ssewayana is currently bedridden because of ill health and could not attend court in person because he is currently admitted at Mulago National Referral hospital.

He revealed that they are afraid that Ssewanyana’s medical condition is gradually deteriorating and that he may even not live to stand trial. Caleb Alaka, another defense counsel told the court it is in the interest of justice that the accused persons receive the required treatment such that they stand trial.

In his ruling, Tweyanze directed the prison authorities to ensure the accused persons receive specialized medical attention pending the hearing of their bail application.

"The lord mayor informed court about the status and condition of both Allan and Ssegirinya. Now, we told court we came to hear a bail application, court told us that it was only ready for mention. They called us for purposes of mentioning the application but not to hear it and they were going to give directives. Although court was bent on fixing this matter for hearing from day today but because the state was not ready, court now had no option but to hear the application...Because of insistence on the health situation, court said in the meantime, it ordered for specialised treatment but the good news is at least we're not going to be having a hearing which is going to be prejudicial. We're going to have the bail application. And I want to assure you if all goes we do not see reason why these people should not be out. It is a decision of court but we're optimistic," said Alaka.

Richard Birivumbuka, the Masaka principal resident state attorney who is the main prosecutor in the matter, asked the judge to halt the main trial for murder in Masaka to allow them first to proceed with the terror charges before the International Crimes Division in Kampala. According to the state, it will be logistically exhausting for the state and the defense to be subjected to back-and-forth movements between Kampala and Masaka if the trials are conducted concurrently.

He informed the court that the International Crimes Division of the High court in Kampala has already fixed the hearing of the matter beginning next month February 20 and prayed that they first conclude the trial before they can handle the murder charges in Masaka court. In his response, Lukwago lashed out at the state for opposing their earlier prayers to merge the case files such that they can be heard jointly.

Notably, following their arrest in September 2021, Ssegirinya, Ssewanyana, and five others were committed to the High court for trial in November 2021 for murder, attempted murder, aiding and abetting terrorism arising from the wave of machete killings that marred Masaka and Lwengo districts between March and June 2021 where more than 20 people lost lives.

+2 #1 kabayekka 2023-01-24 19:46
Good that modern Africans over human rights are blaming each other nowadays other than blaming colonial governance that seems to have disappeared from this continent 40 years ago.

One wonders what sort of African professional judges are these that continue to imprison human beings left, right and center because of their different political beliefs?

In actual sense of the history of this poor African country, political murders, prosecution and imprisonment have been on going in this country since the beginning of independence of this country when these two prisoners were not even born! It is only God knows how it is going to be like in 100 years of Uganda's independence!
Report to administrator