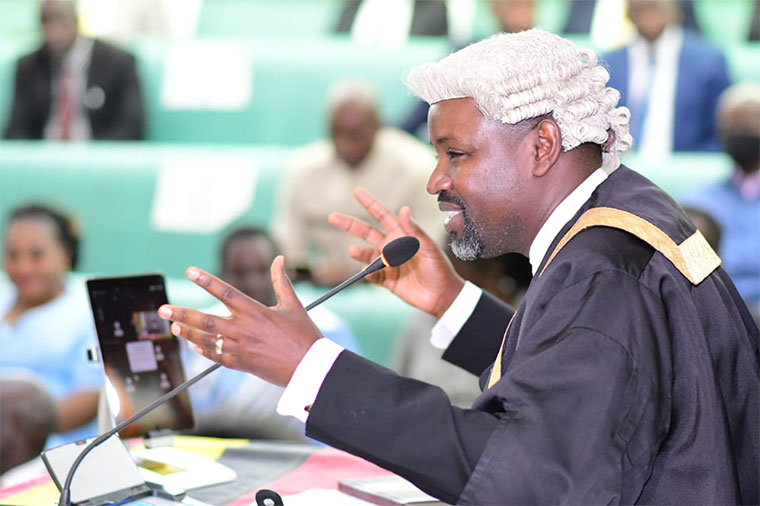 A total of 356 legislators out of 529 in parliament voted, of which 348 voted in support - meeting the threshold of 265 MPs needed to carry on the censure motion as provided for under rule 109(13) of the rule of procedure and article 118(1) of the constitution.

Trouble for Namuganza started in May last year after an ad-hoc committee implicated her for unlawful involvement in the 142-acre Nakawa-Naguru housing estate land giveaway to some investors purportedly on the president’s directive for a satellite city.

The minister walked out of the meeting convened by the ad-hoc committee and later made public comments about parliament, saying that the house does not have the right to investigate her. She also questioned the integrity of the presiding officers.

But an investigation report of the seven-member select committee led by Mwine Mpaka Rwamirama, the Mbarara City South MP which was appointed by the deputy speaker on January 6, 2023, found Namuganza culpable for transgressing against the house and its leadership.

Mpaka told the House that pieces of evidence that include copies of newspaper articles, and video clips of interviews that aired on different televisions and equally streamed on YouTube channels, pinned Namuganza for making statements that attacked the personality of the speaker and violated the decorum of parliament.

In response to the report, Nathan Byanyima, the Bukanga County MP supported the adoption of the report saying Namuganza has time and again nurtured the culture of undermining authorities and should be stripped of her Ministerial position.

"Treat other people the way you want to be treated. You can't treat others as if they are not human beings. We're all members of parliament. Hon Namuganza princess being a minister, she is a member of parliament but she has added responsibility which anybody can take. Today, I feel when you permit something it becomes a culture. Namuganza has taken a culture of undermining everybody. I can't imagine someone who can't say sorry to anybody. Charity begins at home," he said.

Jesca Ababiku, the Adjumani District Woman MP, faulted Namuganza for abusing the cause of women emancipation, saying peharps being censured would restore sanity in leadership and trust of the public.

"All of us women strive to protect the positions given to us. When others take it for granted, Rt. Hon speaker,  it is an abuse for all of us as women not only in parliament but in the entire country. Rt. Hon. speaker, therefore I support the censure motion to a person who is diverting this course on behalf of the women. I'm so hurt," said Ababiku.

Equally, Rose Obigah, the Terego district Woman MP said once defiance and disobedience to the rule of law and the rules of procedure of parliament goes unpunished, the practice is considered an indictment to the integrity House.

"My simple appeal is one; as a presiding officer, please we must obey the rules of procedure. If we don't do that, we're bringing shame to this house. We're going to be a laughing stock in this country," said Obigah.

To West Budama North East County MP, Fox Odoi Oywelowo, the conduct of the minister showed gross lack of respect for the appointing authority, institutional processes and her voters which are symbols of civilization.

Minister Namuganza, also the Bukono County MP in Namisindwa district has since denied any wrongdoing and declined to apologize publicly insisting that she is innocent. Instead, she accused speaker Anita Among of seeking to show her power by pursuing a personal vendetta.

However, the five-hour long plenary session that started at 10:00 am to 3:40 pm finally concluded after Barnabas Tinkasimire, the Buyaga County lawmaker moved a motion, seconded by Asuman Basalirwa of Bugiri Municipality for the House to adopt the committee report and vote.

Deputy speaker Thomas Tayebwa reiterated that though Namuganza was informed and accorded the opportunity to attend the plenary sitting and defend herself against the motion, she did not respond, which was an indictment on herself.

"Colleagues, the threshold was 265 members of parliament. Having obtained the numbers required  - that is more than half of members of parliament as required under Article 118 (1) of the constitution and meeting the threshold provided for under rule 109 (13) of our rules of procedure, I hereby declare that the motion has been carried that Hon Persis Namuganza be censured," Tayebwa ruled.

During the censure, all the ministers were missing from the House. The deputy speaker is expected to transmit the resolution of parliament to President Yoweri Museveni within 24 hours for appropriate action.

Wasting a lot of time on Namuganza yet you fall so short in every aspect is sickening. We can do without that parliament.
Quote | Report to administrator
+1 #4 Remase 2023-01-24 14:12
Waaza, right on the money. Steve wants us to believe that parliament did something that's so beneficial to us. Mbu "in respect of the separation of power, the president will honor the censure and stamp it, period!" Which separation of power?

Of course if M7 benefits from that that censure, he will sign it, if not, he wont. M7 owns parliament and judiciary outright. They do as M7 pleases.

We neither have a parliament nor a judiciary! It's a one man's rule, M7! As a nation, there's absolutely nothing we get out of parliament. what good do we get out of parliament? Steve, you tell me.
Quote | Report to administrator
0 #5 A K Mukasa 2023-01-24 14:51
Accusing Namuganza of bringing Parliament into disrepute is like accusing Jack the Ripper of putting serial killing into disrepute.

It is a useless organ used as a fig leaf to cover the true nature of our system of government, an autocracy soon to become a monarchy. The excitement for censuring a nobody tells you how desperate they are to show justification for their existence. It is like polishing a turd!
Quote | Report to administrator
+2 #6 Lakwena 2023-01-24 14:58
In other words, there is nothing new under the sun.

Pride comes before the fall.

I am still waiting for the day when the Mps will one day rise to the occasion, martial the courage and impeach Gen Tibuhaburwa for abdicating from his constitutional duty.

E.g., after telling Ugandans that he is neither our servant nor employee, and the current abuse of office (resources) and power.
Quote | Report to administrator
Refresh comments list
RSS feed for comments to this post
Add comment