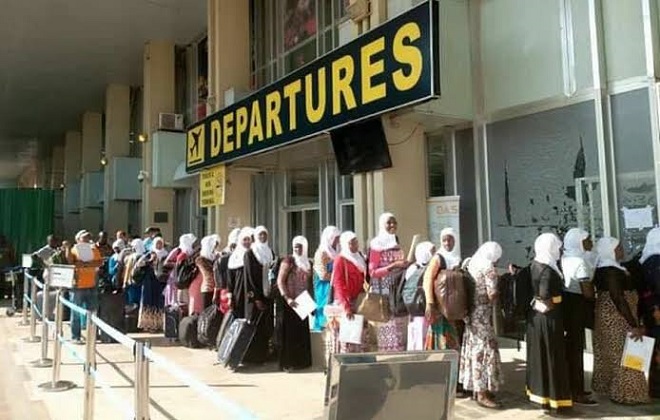 The officials have been targeting mostly first time travellers

Uganda Civil Aviation Authority (UCAA) has arrested and suspended one of its own staffers working at Entebbe International airport after being implicated in allegations of extortion.

This week, social media has been awash with allegations from travellers who claim that some immigration officers are demanding bribes before clearing them to take flights.

Addressing the media, UCAA deputy director Olive Birungi Lumoonya said that the worker, whom she declined to reveal was arrested following a review of the videos that went viral on social media. Lumoonya also said the ban on the use of mobile phones has been reinstated because these facilitate extortion.

"So what are we going to do right from yesterday is to implement the decision, enforce it and follow it up to ensure that any staff from whatever agency who has a direct interface with the customer in the different areas does not use their phone while serving a customer...Following the clips that came out in the last two days, we've had engagements....we had a meeting with all the security agencies to agree on how best we can improve service at the airport but also to see what challenges are being faced in the different areas," said Lumoonya.

She also said that under a new arrangement, the names of all staff will be embroidered on their corporate uniform.  Lumoonya also added that management has resolved that UCAA staff can no longer take a passenger off a plane after boarding without authorisation from senior officials.

"A passenger will be offloaded with only the express permission of the director of airports and aviation security or General Manager for UCAA,” she said.

General Kasita Gowa, director of Immigration said that some of the social media posts were informative and helpful for the correction and discipline of errant staff but others were just sensational.

The director of airport and aviation security Eng Soona Ayub said some passengers were treating routine security checks as harassment which was unfortunate. He went through the processes a traveller passes through from arrival at the airport until the time of boarding a plane.

In March last year, three officials were arrested by the State House Anti-Corruption Unit after a refugee missed a flight ending up spending another $1800 for another air ticket.

Ugandans on Tik Tok really criticized this Mzungu for speaking about Entebbe Airport but he is right. It is one of the worst airports in all of Africa. Just Africa! It's so outdated with unprofessionalism full from all angles. At EBB there is no order. It really needs sorting out pic.twitter.com/PHKQo02xDw

For people who have lived in other countries, its very shocking to see how simple things that require basic common sense is handled.

And Ugandans are usually very proud of how educated they are, yet they cannot do their job with any indication of using that education
Quote | Report to administrator
+2 #2 sula 2023-01-22 21:37
1- Some of us have struggled to explain to fellow citizens what ''State Capture'' means. :

- There is no country in the world : where a citizen is treated the way Ugandans are treated in their own country,
- The emphasis is now on departure , but it is WORSE with entry , even an old panty has to be taxed.

I had an experience with excess personal luggage , with some XMAS new cloths for the family , but for every item you pay unimaginable fees ! better to abandon your property to them.

- Uganda does not belong to Ugandans any more -it was captured ,it is theirs , We just need to liberate ourselves.
Quote | Report to administrator
Refresh comments list
RSS feed for comments to this post
Add comment