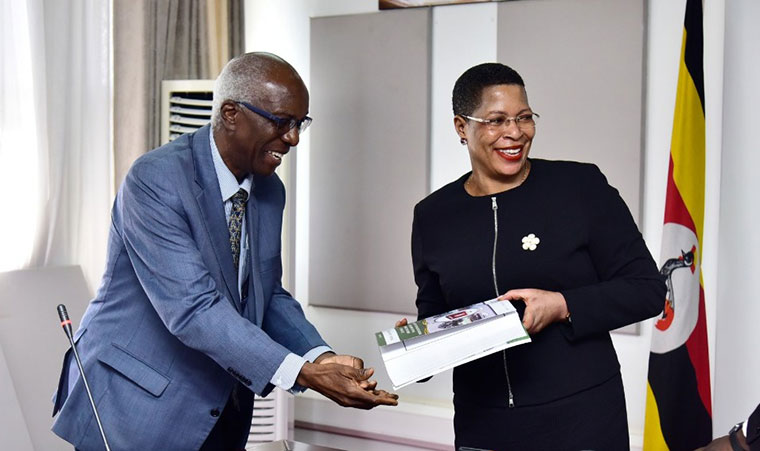 According to the Auditor General's report released to the speaker of parliament Anita Among Thursday, last FY 2021/22 several local governments overpaid salaries and pension, and in some other instances, paid retired, transferred, dead or absconded staff.

The report indicates that Shs 19 billion was lost mainly in payment of salaries to ineligible teachers in 129 Local Governments. John Muwanga in his report further notes that some beneficiaries in secondary schools and tertiary institutions took advantage of forged minute numbers to access government payroll. 609 staff were paid for periods ranging from 1 to 39 years, with some even approaching retirement.

“I undertook an audit of payroll management in Local Governments which revealed major challenges. Despite my recommendations, payroll management challenges still exist in Local Governments including lack of consolidated staff list by ministry of Public Service, irregularities in payments and deductions, and access to the payroll by ineligible staff, among others,” Muwanga noted.

The report indicates: “government lost Shs 3.8 billion in overpayment of salary, pension and gratuity to 2,355 staff or pensioners in 75 Local Governments due to errors in processing of payments. In addition, Shs 2.9 billion was overpaid in 26 Local governments due to use of scale and notches different from those provided in the existing salary structure.”

Government remitted Shs 928 million to beneficiary institutions resulting in financial loss. In the audit of remittances of statutory deductions, Kaliro district lost Shs 314 million in transfer of wage funds to a fictitious supplier while Shs 5.9 billion was lost due to under remittance of Pay As You Earn (PAYE) and Local Service Tax (LST) to Uganda Revenue Authority and Local Government collection accounts respectively.

“Government suffered financial loss through payment of Shs 1 billion to 795 staff that had retired, transferred, absconded or died. This was caused by delays by Local Governments to deactivate affected staff, with some delays stretching to 16 months,” the audit report indicates.

However, 115 Local Governments underpaid staff or pensioners a sum of Shs 24.9bn in relation to salary, pension and gratuity due to inadequate funding and errors in payment processing while Shs 3 billion was not paid to staff in 26 Local Governments due to use of scales and notches different from those provided in the existing salary structure.

Shs 20.7 billion was deducted from 15,002 staff in 44 district Local Governments on behalf of the Uganda Consumer Lenders Association (UCLA), Uganda Bankers Association (UBA) without letters of undertaking or consent as a prerequisite of approval of deductions.

In addition, the ministry of Public Service on behalf of UCLA/UBA deducted Shs 1.4 billion relating to 2,143 employees in 83 Local Governments past the loan end dates.

Another Shs 4.7bn was deducted from 28,508 employees in 69 Local Governments through unrealistic loan end dates, with extreme cases ranging from 11 to 5,642 years. The ministry of Public Service on behalf of UCLA/UBA deducted Shs 8.8bn from 8,468 staff in 95 Local Governments without approval on the Public Debt Management Strategy (PDMS) by the respective accounting officers.

4,341 newly recruited or transferred employees delayed to access payroll, with the extreme cases ranging from 5 to 12 months. The delays that were attributed by accounting officers to Integrated Personnel and Payroll System (IPPS) set-up challenges resulted in 1,746 staff not being paid a total of Shs 2.8 billion by close of the financial year,” further reveals the audit report.

1,019 new pensioners in 65 Local Governments delayed to access pension and some delays ranged from 50 to 110 months leading to failure in payment of Shs 1.3bn, which according to the report leads to despair of the pensioners. The speaker applauded the Auditor General for what she described as timely submission of the audit report.

One would think as a parent that one is paying high school fees for high quality education for their children!
Report to administrator