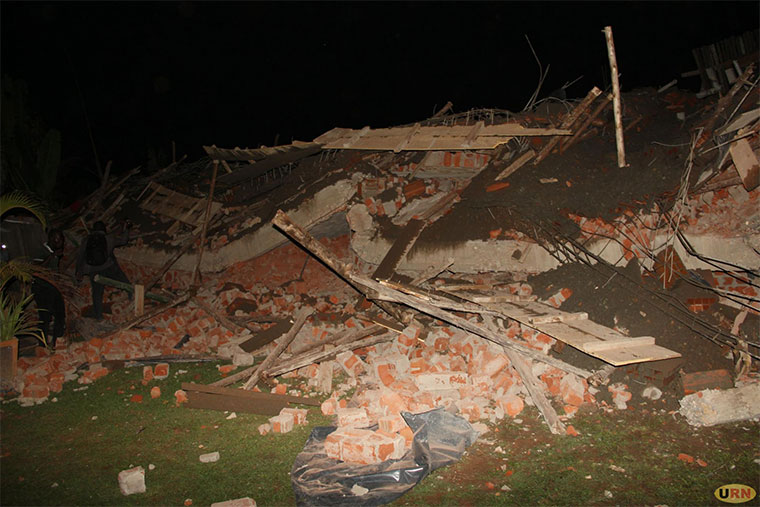 Scene of the collapsed building

A two-floor building still under construction at the Jinja city-based Speke courts hotel crumbled to the ground on Monday night. Eyewitnesses say that the building collapsed at around 7:00 pm while casual labourers were finalizing their day’s duty.

Edward Musisi, a resident in the neighbourhood says that they saw the building collapse but they couldn't do much because of the narrow access through the hotel’s accommodation area to the accident scene.

An administrator at the hotel told URN on condition of anonymity for fear of reprimand by her superiors said that there were six casual labourers on-site at the time of the accident. She said that one of them was severely injured and is currently admitted at an undisclosed private health facility, three reportedly fled, but the whereabouts of the other two are yet to be ascertained.

She said that the hotel's top managers led by the directors will address the media about the incident later. Police were yet to excavate the accident scene to ascertain whether some people were still trapped under the rubble of the building.

Morris Niyonzima, the officer-in-charge of Jinja central police station, said they had started recording statements from the hotel managers about the incident. He said detectives had tasked the hotel managers to account for the casual labourers on site, at the time of the accident.

He also said they had cordoned off the scene to deter illegal access and possible evidence contamination. Twaha Gishebi, the Budondo ward councillor, who doubles as the Jinja City finance secretary, suspects that the accident resulted from the use of poor-quality materials.

"One of the buildings here Speke courts hotel fell down but the cause of this we're actually looking at the poor building materials, no supervision. As an engineer, after approving a project like this, your role is to come and monitor and see what is being constructed, is it per the plan? If they are deviating from the plan, then an action has to be taken. If you look around here, it looks like no supervision has been taking place. Everything used here does not match the standards of the building. The quality of the iron bars is really wanting - as if these guys have not even been putting cement. Even other materials being used here, poor quality and do not match with the structure that they are putting up," said Gishebi.

0 #1 kabayekka 2023-01-18 06:39
Such blantant national corruption going on all over this poor African country, it is only time that much loss of life is going to be lost in building industry!

Such expensive and dodgy buildings going up to 5 or 6 floors are mushrooming all over the State Kingdom of Buganda as if there is no tomorrow. Until the stress of earthquake hits this country!
Report to administrator