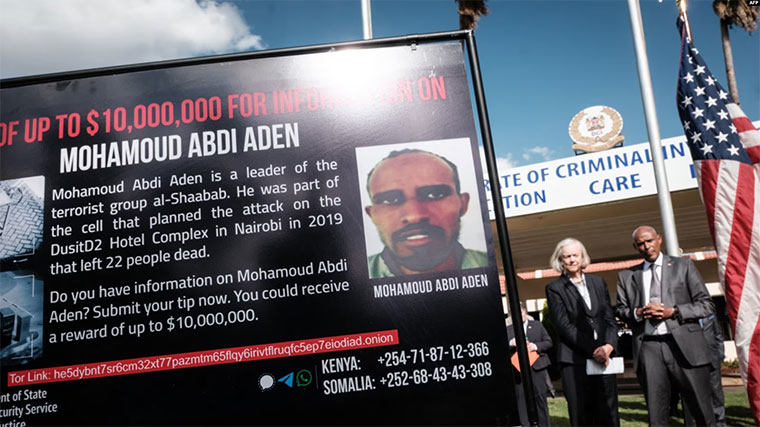 A poster displays the $10 million reward offered by the U.S. for information on terror suspect Mohamoud Abdi Aden of the 2019 Dusit D2 hotel complex attack in Nairobi, at the DCI headquarters in Nairobi

The United States has announced a reward of up to $10 million for information leading to the arrest of the alleged leader of the 2019 attack on Nairobi's Dusit D2 hotel complex. The attack in the Kenyan capital killed 21 people, including a US citizen, and injured 30 others.

Kennedy Macharia was working at the complex on January 2019 when he heard gunshots. He and some of his colleagues barricaded themselves inside their office until police found them and led them out. However, two of his colleagues were shot and killed.

Macharia welcomed the US announcement of a $10 million reward for information leading to the arrest of Mohamoud Abdi Aden, the alleged mastermind of the attack.

"I think the idea of looking for whoever masterminded the whole thing would be of great help, to serve justice to the families that lost their loved ones, some friends, some colleagues, some workmates," Macharia said. "I feel it will serve justice and maybe it will bring closure to the whole ordeal."

Mohamoud Abdi Aden is leader of the Somalia-based militant group al-Shabaab. The US state department officially designated him as a terrorist in October. US Ambassador to Kenya Meg Whitman announced the reward offer, which is equivalent to more than Kshs 1.2 billion. She said the US is seeking information leading to Aden's arrest and conviction in any country, plus information on anyone else involved in the Dusit D2 attack.

"We encourage anyone with information on those responsible for the attack to contact Rewards for Justice on Signal, Telegram or Whatsapp via Kenyan and Somali tip lines displayed on the posters,” Whitman said.

The US reward offer is the third of its kind in three months. In November, the US offered $10 million for information leading to the capture of three al-Shabaab leaders — Ahmed Diriye, Muhad Karate and Jehad Mostafa — alleged to be responsible for attacks in both Kenya and Somalia.

On January 5, the US issued a reward offer for information on Maalim Ayman, believed to have planned an attack on Kenya's Manda Bay Airbase, which is utilized by the US armed forces for counterterrorism training. Security analysts such as Daniel Omondi say the US rewards are signaling Washington's proactive efforts to nab terrorists in Kenya.

"Especially after the 1998 bombing of the US embassies, the US must keep on being on the forefront to help, especially with surveillance and enhancing efforts with regards to collection of information, which is very, very key in preventing further attacks in the region," Omondi said.

Kenya and the US have formed a multi-agency investigation unit to counter terrorism and share information to avert attacks. Authorities from both countries say the unit has been a success.

How come after killing the terrorists leaders their ideology continues to cause civil wars and mass murders. What message does the USA send to Africa by using brutal dictators to fight the bad guys of this world?
Report to administrator