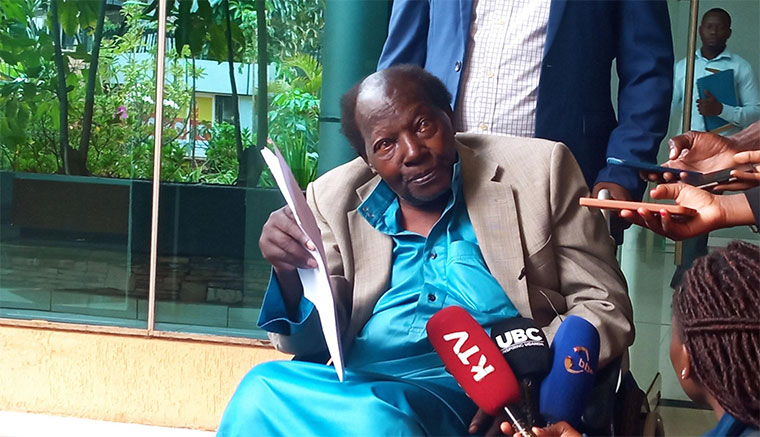 The Constitutional court has dismissed a case by retired justice George Kanyeihamba challenging the move to scrap bail for suspects on capital offences.

While presiding over the 4th annual memorial lecture of the slain chief justice Benedicto Kiwanuka, Museveni argued that granting bail to suspects of capital offences is a provocation. He pledged to use political and legal means to see that bail for capital offenders (suspects) is scrapped.

Soon, the president held a meeting with the NRM caucus and cabinet to discuss the matter. A leaked cabinet memo indicated that attorney general Kiryowa Kiwanuka proposed that article 23(6) (b) of the constitution be amended to provide that a person accused of committing an offence triable by both the High court and subordinate courts, shouldn't be granted bail until after 180 days or trial commencement, or when the director of public prosecutions (DPP) discontinues proceedings.

He also proposed that article 23(4) (b) and section 25 of the Police Act, both of which require a suspect to be released on police bond if not charged in court within 48 hours, be changed to “forty-eight business hours”. The proposal raised dust among political leaders from the opposition and a section of the ruling NRM party, the academia, and rights activists. They condemned the move as unconstitutional and to an extent, a plot to silence voices critical of the government.

The petitioners hence moved under article 50 of the constitution, which provides that any person who claims that a fundamental or other right or freedom guaranteed under this constitution has been infringed or threatened, is entitled to apply to a competent court for redress that may include compensation.

The government through the office of the attorney general opposed the application, saying that it was wrongfully filed before the Constitutional court and was based on hearsay. In one affidavit sworn by the head of public service and secretary to cabinet, Lucy Mbonye Nakyobe, she held that minutes from cabinet meetings are private and cannot be accessed by the public, hence rendering the allegations regarding the cabinet memo null and void.

It was also argued that the president had been wrongfully sued because he's protected under article 98 (4), which provides that a sitting president is not liable to proceedings under any court. As for the NRM, they didn't see why they had been sued since as a party, they often meet to discuss issues before taking a decision.

Now, in her ruling on behalf of the panel of Constitutional court justices, Monica Mugenyi, says that the application was wrongfully filed before that court. She says that article 137 (3) (a) which provides for constitutional interpretations is clearly inapplicable to the present set of facts given that there is no act of parliament or any other law or indeed anything down by the authority of any specific legislation that has been challenged.

She held that if the petitioners felt that there was a threat to a constitutional right, they ought to have filed a petition before a competent court, not the Constitutional court as provided for under article 50 (1).

"In the result, I am satisfied that this petition is misconceived and improperly before this court," ruled the justice.

The justice also didn't find the act of calling a party caucus meeting per se to constitute a constitutional violation. She opined that a meeting convened to discuss legal reforms would not amount to a meeting for an unconstitutional purpose unless it can be demonstrated that the subject of discussion would amount to a contravention or abrogation of the constitution.

She made reference to Supreme court judgement in the case of the attorney general Vs David Tinyefunza in which it was held that a mere mention of a constitutional violation is not sufficient to establish a cause of action before the court. She says, the matter before the court ought to depend on the interpretation of constitutional provisions for determination.

"In this case, all that is furnished in the petition are copies of newspaper references to a cabinet meeting on the subject of bail. The petition does not present any formal proposals, simply alluding to a memorandum of proposed amendments to article 23 (6) or the constitution and section 25 of the Police Act that was allegedly authored by the Hon attorney general, without availing it to the court," ruled the justice, adding that even if the memorandum had been availed, the court must be on guard to avoid premature adjudications and entanglement in abstract or speculative disputes between potential petitioners.

She hence dismissed the petition with no costs. Other justices on the panel, Frederick Egonda Ntende, Elizabeth Musoke, Christopher Madrama, and Christopher Gashirabake agreed with her judgment. The lead petitioner, retired justice Kanyeihamba is dissatisfied with the ruling of the court, saying he will appeal the same before the Supreme court.

He says the justice of the Constitutional court seems to have acted to the wish of someone else rather than follow the law and determine the case he is confident is right before them. It should be noted that only retired justice Kanyeihamba and Alex Wavamuno were still part of the case. The other four withdrew from it.