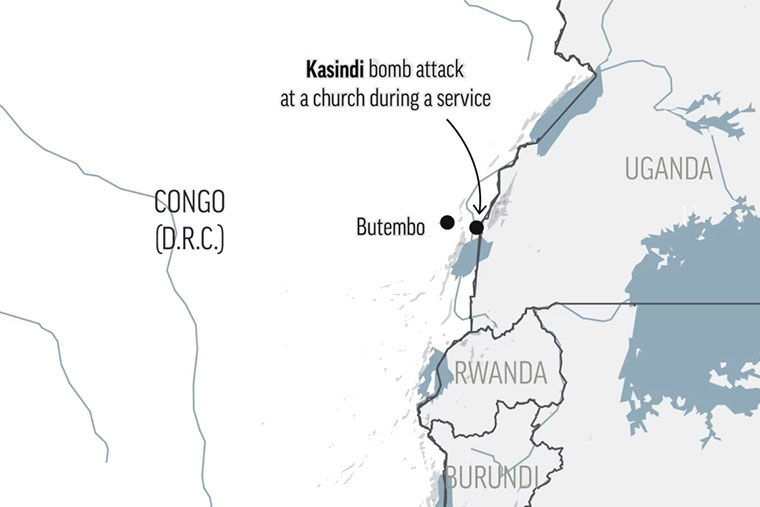 A bomb killed at least 10 people and wounded 39 others as it ripped through a church in eastern Democratic Republic of Congo on Sunday, in an attack blamed on suspected Islamists.

A Congolese military spokesman, Antony Mualushayi, said the "terrorist act" happened in a Pentecostal church in North Kivu province's Kasindi, a town on the border with Uganda. The explosion killed at least 10 people and wounded 39, he added, revising up an initial death toll of five. Both tolls were provisional, the spokesman said.

But the spokesman for Uganda's military operation in the DRC, Bilal Katamba, said on Sunday evening that 16 people had been killed in the blast, and at least 20 wounded.

"The attackers used an IED to carry out the attack and we suspect ADF is behind the attack," he added.

AFP was unable to independently confirm the death toll. The DRC's Communications ministry said on social media that the attack was apparently carried out by the Allied Democratic Forces (ADF), which the Islamic State group claims as its affiliate in central Africa.

The ADF is one of the deadliest of the more than 120 armed groups in eastern DRC, many of them the legacy of regional wars that flared at the turn of the century. It has been accused of slaughtering thousands of Congolese civilians and carrying out bomb attacks in Uganda. ADF operatives have also planted bombs in towns in North Kivu in the past.

On Sunday evening, the Islamic State group claimed responsibility for the attack and said that "nearly 20" people had been killed, according to the specialized monitoring group Site intelligence group. Army spokesman Mualushayi said a Kenyan suspect was arrested in the wake of the attack.

A deacon at the evangelical church in Kasindi, Esdras Kambale Mupanya, said that worshippers had gathered for a baptism ceremony before the bomb detonated.

"Several among us died on the spot, others had their feet cut in two," the 42-year-old told AFP. "God saved me and I came out in good health with my choir members. Today was not the day I should die".

Fellow survivor, Jean-Paul Syauswa, said the explosion happened just after a group of people had been baptized, while a blind pastor was commenting on Bible verses.

Kiza Kivua, a 50-year-old farmer who lost his brother in the attack, said he was having trouble coming to terms with the loss of a "loved one who went to church to pray". He added that he thought the government was neglecting its citizens.

"How can such a situation happen when Kasindi is full of soldiers?" Kivua said.

In 2021, the United States labelled the ADF a "foreign terrorist organization" with links to the Islamic State group. The militia is active mainly in North Kivu and neighbouring Ituri province. The same year, a joint Congolese-Ugandan military operation began targeting the ADF inside the DRC.

But the attacks have continued. A report by independent experts for the UN Security Council, released in December, said the ADF had "continued its geographic expansion" despite the Congolese-Ugandan military operation, killing at least 370 civilians since April 2022.

It also warned that the ADF was changing tactics: opting for "more visible and more lethal" bomb attacks in urban areas. In April last year, for example, a woman detonated a suicide vest in a bar in North Kivu's capital Goma, according to the independent UN experts. Six people died in the attack and 16 more were wounded.

Congolese President Felix Tshisekedi placed North Kivu and Ituri under a so-called state of siege in 2021 in a bid to stem the violence, with military officials replacing civilian administrators.

The measure has also largely failed to stop attacks against civilians. The DRC's presidency condemned Sunday's attack, as did the United Nations peacekeeping mission in the impoverished nation of over 90 million people.