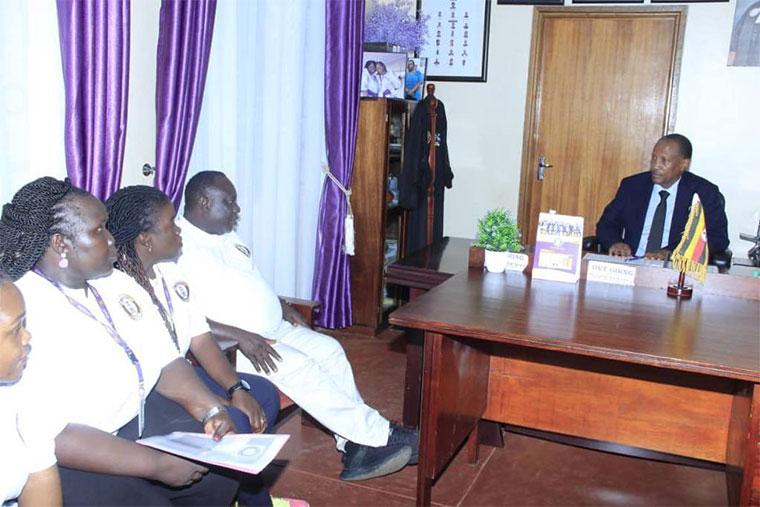 The deputy chief justice Richard Buteera has cautioned judicial officers against "feeling too important" and being inclined on creating fear amongst the general public.

With this, Buteera said , many suspects have henceforth been unnecessarily harassed, remanded and handed harsh sentences on even flimsy charges which has ended up clogging prisons and creating a case backlog.

"It is also true that some of our judicial officers in the old system imagine, that for you to be a magistrate and to be recognised, you have to show people that you're powerful....I visited a prison in Mubende as chief magistrate, and I found someone on remand for contempt of court. But what had he actually done? He walked in court and forgot to remove his cap and he was on remand. He reported to court, after two weeks he was remanded again. Really for putting on a cap? So these are the things that should be addressed," said Buteera.

"You can be a magistrate, you can be very important, you don't have to remand people, you don't have to demonstrate that you're important after all you're important. Someone said we fear court. Already they fear you so what are you looking for? I think this exposure, these discussions are going to all of us. They are going to the public but also to us. You're importance is not being questioned, you're a very important person, don't harass people and I think it will go away with the open court we're having, with the discussion we're having." added Buteera.

Buteera was presiding over Entebbe Chief Magistrate court open day, a day when court invites court users and members of the public for an interaction about its operations and also hear their concerns.

Briefing the deputy chief justice about his department and its operations, the detective assistant inspector James Barya said at least 54 trafficked abroad through Entebbe airport died last year. He also disclosed that 1,253 victims were intercepted in the process of being taken out of the country illegally.

The officer told the judge that 167 cases were recorded out of which 63 were investigated. 17 cases were taken to court, of which 16 ended in convictions and one case is pending. He said 83 cases were shelved. The officer said most of the time the victims are unwilling to provide information, which frustrates progress of the cases.

"Normally our victims shy away, they don't give us proper information on who was behind her movement from her home to the airport and to wherever she was going. That brings us a very big problem trace that person. Most of them tell us that; 'our persons who are taking us outside are abroad. My agent is in Canada, my agent is in Dubai, in Saudi Arabia' which is very hard for us to get to Saudi Arabia for prosecution and affect arrest. Most of them do not come forward," said Barya.

Detective assistant inspector of police Maxon Katuramu who is in charge of anti-drug trafficking reported that 2022 saw 17 cases recorded of individuals trafficking illegal drugs out of or via Uganda and 13 of these pleaded guilty while three are still pending in court.

Chief magistrate Stella Maris Amabilis had earlier complained that the Entebbe station has limited office and court space, forcing two of the four magistrates to conduct court hearings from their chambers. Buteera promised would be looked handled.

Charles Mukalazi, the LC III chairperson of Bussi island complained of residents moving long distances to Entebbe to get justice, to which Buteera said that a magistrate grade one had already been appointed to serve there. The local government has already provided land for the construction of court premises, which Buteera urged other local governments to enable the judicial department adequately serve them.  He said Entebbe was being considered for the setting up of a High court.

Some of the court users complained of their cases being disposed off without their knowledge to which the deputy chief justice emphasized judicial officers must always make the next hearing date clear to the litigants. He said the judiciary would further strengthen inspection to address delays and inefficiencies. Many of the complaints pertained to land disputes.

To address case backlog, Buteera said they should always try the alternative dispute resolution before going for lengthy litigation. Other solutions proposed included taking claims below Shs 10 million to the small claims court and those on criminal charges to be encouraged to bargain with the state for smaller sentences in exchange for pleading guilty. A moot court was acted to show the public how plea bargain works in practice.

He urged magistrates to prioritise cases on the basis of first come first serve while always giving consideration to vulnerable groups like children, the disabled, the elderly, sick and widows. Present at the function were justices Alex Mackay Ajiji, deputy head of the High court criminal division and senior presidential advisor Amos Ngoloobe who is also retired deputy director of criminal prosecutions. Entebbe Chief Magistrate court last held the event in 2018.

+1 #1 Lysol 2023-01-15 20:41
The corrupt regime has been using the judiciary has a weapon against Ugandans.
Report to administrator
0 #2 Rex Okello 2023-01-16 12:40
• An important Magistrate/Judge would be one who receives and closes case files in a timely and efficient manner according to the law. Only complicated cases should clog the process.

• A magistrate/judge can choose to just enjoy high pay and benefits without closing case files assigned to them.

• Who is checking the performance of magistrates/ judges after they have been assigned case files?

• Will society live in peace when people who are paid to resolve disputes leave court cases to pile up?
Report to administrator