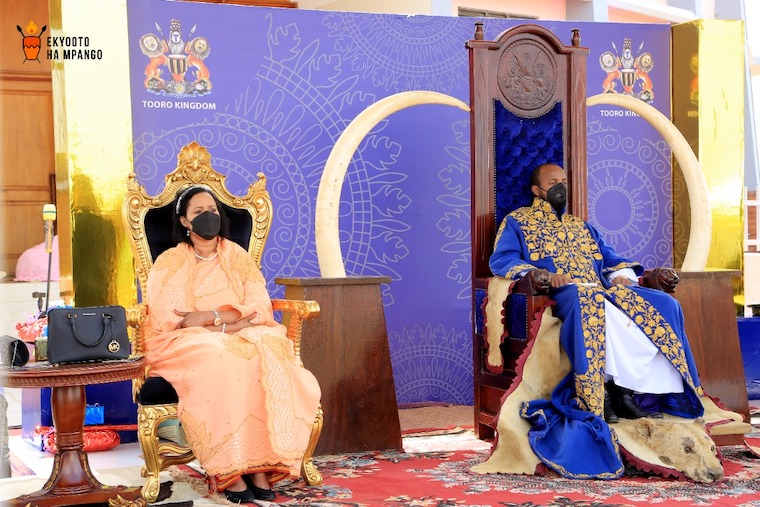 King Oyo (R) has been sued by kingdom loyalists

Tooro king, Oyo Nyimba Kabamba Iguru Rukidi IV has been dragged to the High court in Fort Portal over the appointment of the current kingdom premier.

Through their lawyers of Atuhaire & Co. Advocates, the petitioners are contesting the manner, in which Oyo appointed Kiyingi as the kingdom's premier. They argue that the Orukurato, which sat on August 26 where the king appointed Kiyingi was illegally constituted as it lacked a speaker and a deputy speaker because Eng Julius Mwirumubi who chaired the council sitting was never sworn in as the speaker of the supreme council.

On September 5, some clan leaders on the kingdom supreme council petitioned Oyo over the matter and asked him to cause a legally constituted council with a speaker and deputy speaker and use his discretion to immediately withdraw the appointment of Kiyingi and allow the constitutional council to use its mandate to offer its opinions. According to Rev Muhanga, the king did not respond to their petition leaving them without any option but to take legal action against him.

Muhanga says that they want the court to nullify Kiyingi's appointment and his Nyakake as the kingdom prime minister and deputy prime minister respectively and issue a permanent injunction barring the defendants from exercising any functions of the offices they assumed wrongly. They also want the court to issue a permanent injunction barring the king from causing an assumption by any person of any office in a manner contrary to the culture and traditions of the institution of the traditional leader of the kingdom.

Court has since summoned the respondents to file a written defense within 15 days or else the court proceeds to issue a judgment in their absence. According to the sources, the king filed his defense last week.