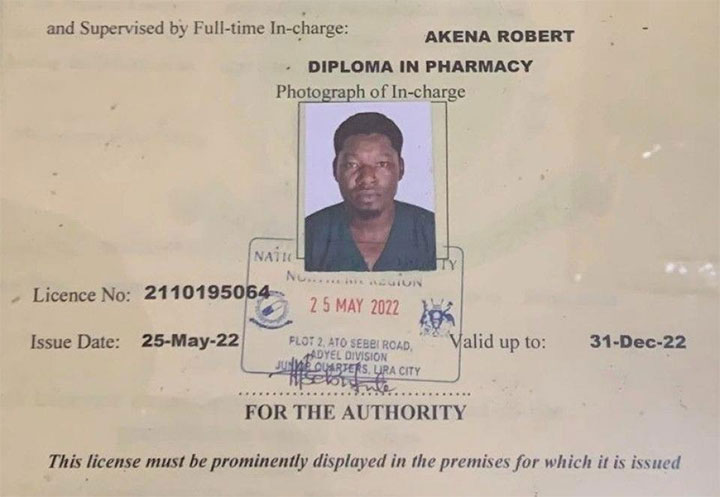 Robert Akena, a pharmacist who is accused of stealing medical supplies worth Shs 1.5 billion from Kitgum General hospital has surrendered to the police.

NDA also confiscated more supplies from Unyama trading centre in Gulu city, following a tip-off that Akena had another clinic there.  Akena however fled and had been on the run. Ebil said the security personnel kept picking up many intelligence reports about where Akena was hiding and mounted pressure on him until he surrendered.

Some of the medical supplies recovered during the operation included an oxygen concentrator and its accessories, kidney cups, a portable autoclave, a digital baby scale, an instrument trolley donated by USAID, drip stands, a bone operation set, six surgical trays, and two digital thermometers, among others.

Kitgum district police commander (DPC) Mandur Suwed said that they are still carrying out investigations and divulging the information would jeopardize investigations. Illegal possession of government stores is contrary to section 316 of the Penal Code Act.

0 #1 kambarage 2022-12-08 06:06
Eh...our population is spoilt. And National Medical Store is always blamed for not sending drugs yet the pharmacists hide them...where was the hospital management committee when this man was stealing?

Couldn't they ask pharmacists to account for the drugs sent to them? They could be having a hand in it as well and should be investigated. Indeed we are our own thieves.
Report to administrator
+1 #2 Lakwena 2022-12-08 08:47
Shs 1.5 billion is 3 times the 1985 national GDP (Shs.500 billion), which satisfactorily funded all the social services especially Health and Education amidst Tibuhaburwa's 5-year subversion.

Arrogant and nasty Mr. M7 mocked and scoffed at the GDP, Shs.500 billion when he violently took power in 1986. But now under his watch 36 years and counting, Shs.1.5 billion worth of drugs and medical equipment are stolen by a pharmacist, one Robert Akena.

In other words, how many Robert Akena of this country are out there; syndicating, racketeering and outdoing each other in stealing our collective sweat, blood, health and lives under the watch of Gen Tibuhaburwa's State House Anti Corruption Blah,Blah Black Sheep, do you have any wool?
Report to administrator
0 #3 kabayekka 2022-12-08 15:21
Lakwena you have a point. Politicians do not seen to learn anything. It is all mouth and no good actions. One hopes that it may be the next government that will be wiser in stopping this sort of blatant corruption in its tracks.

A medical surgeon should be around in the courts of law to amputate parts of the body of these Africans who are determined to dip their figures without any worry, into the tax payers money anyhow.

Many of them seem to have many favors from this current government and do not seem to fear any punishment whatsoever from the brutal authority.
Report to administrator
0 #4 kabayekka 2022-12-09 20:37
One has received media messages of thousands of medical personnel kneeling down begging President M7 to stand again during the national election of 2026.