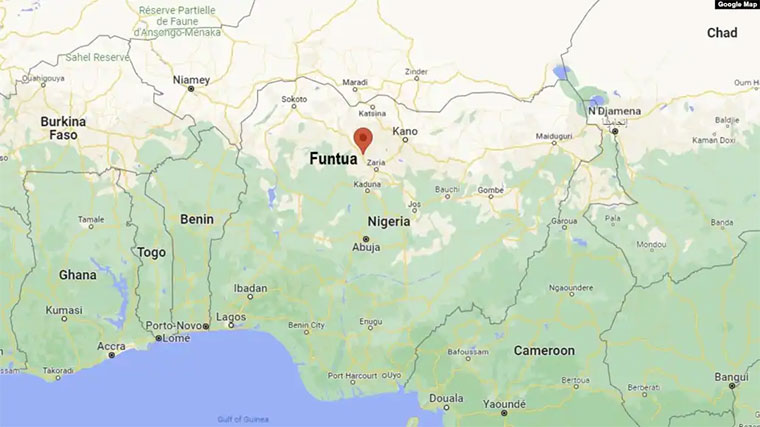 A map showing the location of Funtua, Nigeria

Nigerian police in northwest Katsina state say they have rescued four people abducted by gunmen from a mosque Saturday evening and are searching for at least 13 more still missing.

Katsina state police spokesman Gambo Isah said Monday the worshippers still missing from the attack on the mosque are mostly adult men. He said gunmen on motorcycles attacked the mosque in Funtua, about six hours north of Abuja, Saturday night as people were praying. The attackers shot the Imam and one other person.

Isah told VOA the two survived and are being treated at a local hospital.

"On that day worshippers were observing their last prayers of the night,” he said. “Before the arrival of our police team the hoodlums had already escaped with some worshippers. But a combined effort of police and vigilante successfully went after the terrorists and about four of the victims were rescued. Right now we're looking for about 13 worshippers.”

Local media reported more than 40 people were missing. The mosque attack is the latest in a wave of abduction-for-ransom violence in northern Nigeria that authorities have struggled to stop.

The attacks have increased pressure on President Muahmmadu Buhari’s government to improve security ahead of February elections to choose his successor. Nigeria's national police deployed heavy security to the re-opening on Monday of the Abuja-Kaduna rail line.

Train service was suspended after gunmen attacked the night of March 28, killing nine passengers and abducting 62 others. Negotiations saw the passengers slowly released in groups, with the last captives freed in October.