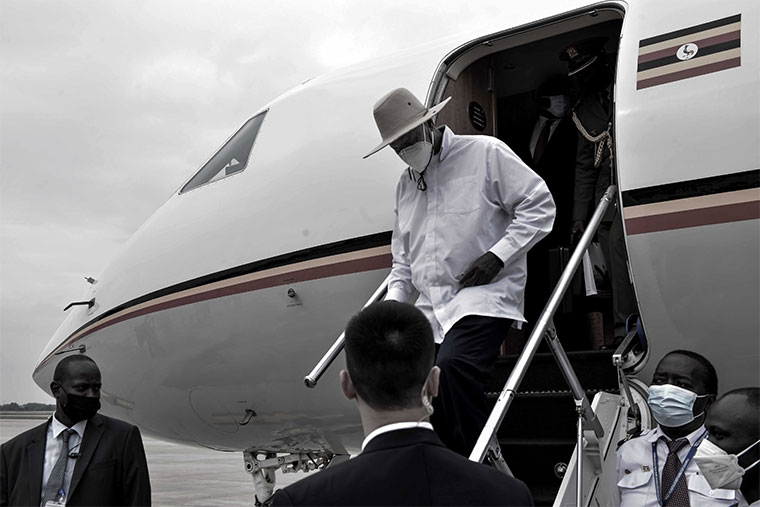 President Museveni has flown to Vietnam for a three-day state visit at the invitation of his counterpart President Nguyễn Xuân Phúc.

In a statement by the presidential press unit (PPU), at Noi Bai International airport in Hanoi, the capital of Vietnam, Museveni was received by the chairman Office of the President Le Khanh Hai, the minister of state for Foreign Affairs of Vietnam Ambassador Nguyen Minh Hang, director general in charge of Middle East and Africa Bui Ha Nam and chief of state protocol Nguyen Viet Dzung.

While in Vietnam, Museveni is expected to among other engagements hold bilateral talks with the host president, and witness the signing of agreements and different memoranda of understanding between the two governments.

Museveni will also officiate at the opening of the VietNam-Uganda Business Summit and Trade Exhibition at Vietnam National Convention Center (NCC) - Hanoi on the theme, ‘unlocking investment opportunities.

The president is also expected to meet the Ugandan community living in Vietnam. Museveni will also lay a wreath on the mausoleum of President Ho Chi, the founder of the Democratic Socialist Republic of Vietnam.

Otherwise, never and nowhere in the African Tradition are human remains (skulls) put on display on roadside the way it was done in Luweero bythe NRA/M leadership.
Report to administrator
0 #3 Henry Baisi 2022-11-24 12:18
Vietnam is a good example of a country destroyed by decades of war that went on to transform its economy and society.

Their experience is worse than whatever Uganda went through, yet they are thousands of miles ahead of us. They are doing something good. I hope that Uganda's delegation will learn from Vietnam, particularly its approach to Industrialisation and foreign investment.
Report to administrator
+3 #4 Akot 2022-11-24 14:30
Ugandans MUST WAKE UP as Museveni will die of old age in post & leave the seat to his son!

Why are Ugandans unconcerned about themselves, their kids, tommorow...& just ensure their land belongs to Museveni's family & they remain slaves, in the zone they pretend is formed by their tribal lands, yet they are slaves of the migrant family?
Report to administrator
+7 #5 Rwatoro 2022-11-24 19:25
He carried all the Hungry Wolves with him! Vietnam is in trouble! They are likely to sell off Lake Kyoga, and possibly lake Albert, which are still on negotiations.
Report to administrator
+6 #6 Lysol 2022-11-25 00:17
Another taxpayers' money being wasted on a globe trotting by an old dude in a big dumb hat.
Report to administrator
0 #7 kabayekka 2022-11-25 15:26
That is what Uganda Airlines is all about. Running non profitable government trips around the world as the country' debt portfolio continues to raise and the national economy stumbles.
Report to administrator