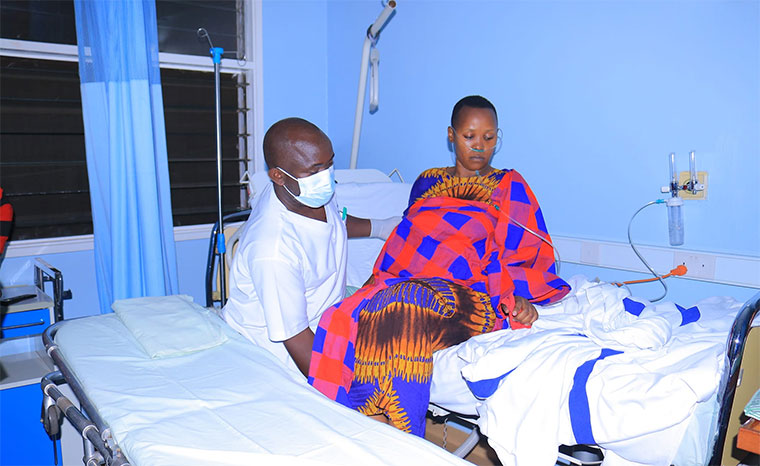 The Kampala Woman member of parliament, Shamim Malende has been rushed to the intensive care unit (ICU) after undergoing abdominal surgery at the Aga Khan hospital in Nairobi, Kenya.

Lubaga North councillor, James Mubiru, who is with her in Nairobi told URN that she underwent abdominal surgery yesterday Monday after doctors noted that she had ingested a strange chemical which affected her.

He said that Malende regained consciousness following the surgery and doctors noted that she would be discharged in about a month’s time. She was, however, rushed to the ICU today Tuesday evening when she started complaining of severe stomachache before blacking out. Malende was first admitted at the Uganda Martyrs hospital in Lubaga Division, Kampala after she reportedly suffered a seizure while at her Kawempe residence on November 13, 2022.

While in Lubaga, she was placed on oxygen but her condition worsened, prompting her transfer to the Aga khan hospital on November 20. She was accompanied by Mubiru, her mother Jane-Francis Nassuuna, and fiancée Shamiru Ssebunya.

“The doctors were seeing nothing so they referred us to a bigger hospital. It was decided that we bring her to Aga Khan hospital,” said Mubiru in a phone interview.

Before Malende was rushed into ICU, Mubiru had barely an hour earlier told our reporter that she had regained consciousness and is able to recognize people, an improvement from when she left the country. Following her admission into ICU, Mubiru says they are not sure what to expect.  Malende’s last public appearance was about four days before she was reported sick and rushed to a hospital in Lubaga.

On November 9, she was arrested by the police in Kawempe where she was found distributing reflector jackets to boda boda riders. She was intercepted by police and taken to Kawempe police divisional headquarters where she was detained for at least three hours and released without charge. Malende has been at the forefront of demanding justice for the detained supporters of the opposition National Unity Platform (NUP) party and would spend most of her time in court.

She is also part of the legal team representing her jailed colleagues Makindye West MP Allan Ssewanyana and his Kawempe North counterpart, Muhammad Ssegirinya who are facing charges related to terrorism before the International Crimes Division of the High court.