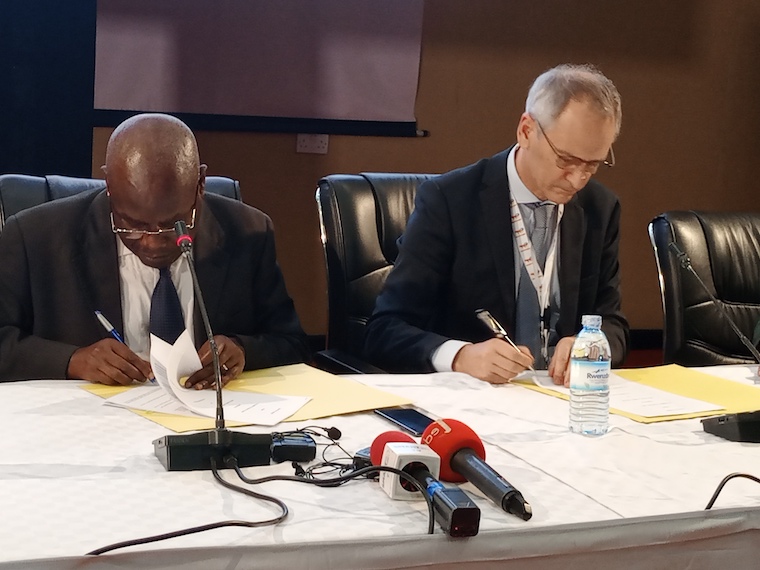 The minister of State for Energy, Opolot Okaasai

The minister of State for Energy, Opolot Okaasai, has advised TotalEnergies to also go for geothermal energy as part of its drive of achieving its clean energy target.

“I know Total also has an interest in going to other sources of energy and developing them like hydro power…,” he said.

Geothermal power is a form of renewable clean energy, generated from areas with heat in the ground. Okaasai said Uganda has great potential for the development of geothermal power.

“I know we have the potential for geothermal in the areas where petroleum is found. We shall continue to have this discussion with TotalEnergies and we shall agree with them,” he said.

Okaasai said Uganda has potential sites in places such as Kasese - with steam in the ground that can be used in the generation of geothermal power. He said this recently at the signing of a Memorandum of Understanding (MOU) with TotalEnergies to develop renewable energy.

The signed solar renewable energy project agreement between TotalEnergies and government through the ministry of Energy and Mineral Development will have the possible deployment of 120 MW of Solar Photovoltaic (PV) technology in selected parts of the country. The agreement aims at ensuring energy security and energy transition in the country.

“The partnership we have with TotalEnegies will not only stop on the feasibility study, we shall sign another MOU to get the infrastructure of generation of electricity using solar systems. The agreement also aims at ensuring energy security and energy transition in the country,” he said.

Okaasai said Uganda has an ambition to achieve universal energy access by 2040.

“There is nothing which will stop us from getting renewable energy because we are focused on it and determined to transit Uganda from fuel consumption to clean energy,” he said.

Okaasai said government’s objective is to develop geothermal energy to complement hydro power and other energy sources to meet Uganda’s energy demand in a healthy environment.
Uganda is one of the East African countries with strong geothermal potential. The real challenge is in exploitation.

Katwe-Kikorongo had already been previously recognized as one of the major potential geothermal areas in Western Uganda. Uganda has estimated geothermal resources of up to 340 MW from 24 areas in the Ugandan Rift System.

According to a GIZ press statement, the rising energy demand is (about 10-12 per cent annually), rapid urbanisation and economic development, which call for urgent action to exploit the region’s renewable energy resources.

Philippe Groueix, the general manager of TotalEnergies Uganda, said the solar energy projects in Uganda are part of the French company’s global multi-energy strategy and commitment to developing 1GW of renewable energy in Uganda by 2030.

He said Total Energies Uganda will undertake feasibility studies and develop these solar PV projects in accordance with the signed project agreement and the applicable laws.

“The realization of this project development will also contribute towards our global ambition to reach 100 GW of renewable production by 2030,” Groueix said.

Apart from the solar energy project, Groueix said that Total Energies will use its existing infrastructure in Uganda to help in the deployment of E-mobility infrastructure. The company, which is developing Uganda’s oil and gas in the Albertine Graben, also has over 200 fuel stations, which could be upgraded to provide charging stations for electric cars.

“This is the first start on the journey. We hope that we will be able also to come back with other projects. And we also have ambitions to be a key player in E-mobility,” Groueix said.

Total Energies has a climate ambition to get to net zero by 2050.

0 #1 Henry Baisi 2022-11-23 07:02
@Hon Okasai, surely TotalEnergie cannot solve all of Uganda's problems. You are advising them to do that. Are there no clever people in Teso who can create local businesses to exploit the opportunities you refer to?

Must we continue to look to and rely on Foreigners to develop our country? You are taking us backwards. Idi Amin liberated Uganda's economy from the Indians. You brought them back to save you. Have they?
Report to administrator
0 #2 Akot 2022-11-23 14:55
French & other developed countries' population already said NO to TotalEnergie wanting Uganda oil as this is not clean for climate!