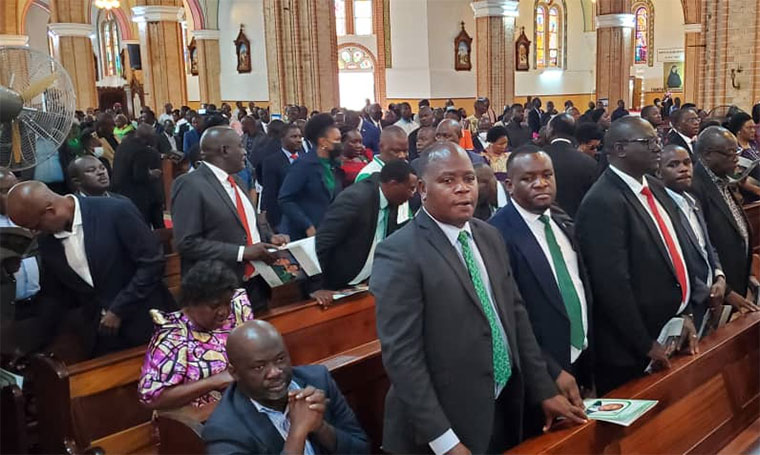 The premier was delivering President Yoweri Museveni's message at the burial of Democratic Party stalwart Dr Paul Kawanga Ssemogerere at the family ancestral home in Nattale, Nkumba in Wakiso district on Monday.

Although Museveni and Ssemogerere remained on different political paths, the president expressed sorrow and lauded Ssemogerere for being non-disruptive and non-subversive in his political career. Museveni who sent a personal condolence contribution of Shs 20 million said the only bad thing to say about Ssemogerere was when in 1996, he forsook his 'National Unity Government.

The deceased served under Museveni since the latter’s overthrow of Tito Okello Lutwa’s regime in 1986 under what was named the national movement that critics branded as a one-party state. Ssemogerere decamped later promising to free political parties once elected but lost the 1996 presidential poll to Museveni.

Amid protestations from mourners, most of them opposition sympathisers, Museveni extolled the recent alliance with DP and UPC, for which he said Ssemogerere (was not in support of the relationship) still had an immense contribution to make in spite of his age. Afterwards, Nabbanja decried the growing intolerance of the opposition towards government officials.

"When someone is speaking and you boo, it means there's something wrong with you. For us [government] we listened to them [opposition] and even though most of what they said were lies, we shall pick on some truths and try to correct the situation...When you listen, you learn, and that is what the president told me when he appointed me as prime minister. But anyway, I pity those shouting at us. They can shout and for us, we shall rule," said Nabbanja in Luganda.

The pacifist died on Friday aged 90 but was at the helm of arrangements for an opposition-led national unity conference slated for January 16, 2023. Museveni said he first got to know the late Ssemogerere in 1961 when he, together with then classmates advocate John Kawanga and late Eria Kategaya, as students at Ntare School invited the latter to give a talk to their student political grouping.

Museveni said though they had a third line of thinking that later crystallised into the NRM, they admired DP’s principles on national unity and the politics at Mengo as opposed to UPC which always said one thing and did the other.

Earlier on Nabbanja had taken time to respond to attacks by National Unity Platform (NUP) leader Robert Kyagulanyi who amid ululations told mourners he was the elected president of Uganda, having allegedly won the 2021 presidential poll he said was rigged by Gen Museveni.

Likening Museveni to Milton Obote who he said rigged the 1980 general election against Ssemogerere, Kyagulanyi said the former had done the same against him in the most recent presidential elections of 2021.

He also talked of the recent abduction and disappearance of one of his supporters; Jamshid Kavuma 16 days ago by security operatives and intimated that he too could disappear forever like the late legislator Jolly Joy Kiwanuka of the 1960s.

Kiwanuka was the father to the current Attorney General Kiryowa Kiwanuka, who, Kyagulanyi accused of defending murders and disappearances of Ugandans under the current regime. Kyagulanyi also disclosed he, Dr Kizza Besigye and Maj Gen Mugisha Muntu had been forced to take their forces of change meeting to Nairobi because they are unsafe in Uganda.

But Nabbanja dismissed reports of insecurity and human rights abuse saying, the reason Kyagulanyi could speak this way in the presence of government officials is that he knows nothing will ever happen to him thereafter

She also dismissed lord mayor Erias Lukwago’s accusation that government had not recognized the late Sseogerere as a hero, saying Ssemogerere was handed a Golden Jubilee medal in 2006.

Conspicuously missing at the funeral was current DP president general, Nobert Mao who adherents accuse of having sold the party to NRM for silver coins when he entered a cooperation agreement with President Museveni last July.  In return, he was appointed minister of Justice while the secretary general Dr Gerald Siranda was seconded to the East African Legislative Assembly (EALA) by the ruling NRM.

Why is the tribalistic system Museveni put in place WIRHOUT consulting Ugandans, srill standing, with tribal leaders so so quiet, just enjoying living in Museven'is Uganda?

Why will Ugandans go for next fake presidential, parliamentary, local elections that will ensure, bolster, protect Museveni's 45 years in power?

Why are Ugandans alright being slaves of the migrant they hve hom to then naively handed their country to & are ensuring it remains so?

Why is Museveni protected on all sides; Ugandans are tribally divided powerless, ensuring every tribal land belongs to Museveni!

Why are Ugandans slaves of the migrant family in the fake country formed by their tribal lands?
Quote | Report to administrator
+2 #2 Lakwena 2022-11-22 14:56
In other words, it is Tibuhaburwa Public Confession and plea of Guilt!

It is annoying because, if Hon Ssemogerere (RIP) "was non-subversive" (Peaceful) and Gen Tibuhaburwa, was and still is 'subversive" (a criminal), 36 years and counting of lost opportunity, Uganda would have been a peaceful, prosperous and a better country today.
Quote | Report to administrator
-5 #3 jose 2022-11-22 15:05
Mao was very right, it was a mistake how did they really trust a mucholi

An acholi would easily betray if they betrayed their brothers the langi how about a party
Quote | Report to administrator
+2 #4 Loveuganda 2022-11-22 16:40
Of course. What did one expect Nabbanja to do. She had to defend the corrupt regime. And Mao?

There's a lot to be seen of a man of his caliber to sell himself for peanuts because he had no chance whatsoever as he's aging out too. RIP Dr. Paul Ssemwogere.
Quote | Report to administrator
+5 #5 A K Mukasa 2022-11-22 17:12
Thank god the opposition is now taking the fight to Museveni and his co-conspirators by not playing nice when it suits the regime.

People like Nabbanja were not appointed for their qualifications, which we all know are lacking, but for their sycophancy. She was promoted way above her station so we should not take her serious.

As for Mao, missing the funeral was a very cowardly act from a man not known for his bravery anyway. He was always an impostor whose only reason for joining DP was to undermine the party for the benefit of Museveni and his gun toting kinsmen. I hope it was worth it.
Quote | Report to administrator
-2 #6 kasede 2022-11-22 19:05
Quoting Akot:

It's the UNITY that made T. Okello/Acholi stand down.....?

Thear AKOT, You are outright dishonest regarding our history and the role that the Jo-pa- Ohol plaed in it: (i) It is true that the Acholi booted out Obote (an earlier dictor too).

(ii) It is not true that T. Okello stood down from power, but it is true that the NRA booted the Acholi out of power, and T. Okello fled to Sudan with is tail between his legs. (iii) It is true that some Acholi men who were in the military at that time collaorated with M7 against Obote.

Some of those have retired in Ankole and (not in Acholiland). You know why they could not retire & go back home. Anyway, 2 yrs ago one of them complained that M7 is blocking him from developing his land in Ankole. [Expect them (the internaly desplaced Acholi] to be ethnically clensed fron that area in the post-M7 era]. (iv) I will restrain myself from commenting on that "Northern war" by Lakwena & J.Kony.
Quote | Report to administrator
+1 #7 sula 2022-11-23 09:33
1- Kyagulanyi , Besigye, Lukwago and other Opposition leaders spoke well BUT now lamenting has to stop , Opposition has to start action.

2- Let us now mobilise the masses for action.The congregants were right to boo Nabanja, actually they were not supposed to allow her to speak, she was supposed to be treated like J j Odong during Kirumira's funeral , but the best would be to treat her like majjambere.

3- If without any provocation, after the funeral of Jakana Nadduli the senseless thugs hurriedly went and arrested innocent unarmed Nadduli's family members , tortured them ,traumatised them, humiliated them , Then why should decency continue to be offered to them.

4- If our forefathers were able to resist Obote after the 1966 crisis, how can can the whole of Buganda generation after generation accept to be tortured and humiliated ?????????
5- Kyagulanyi start preaching kwebereramu oba kuffa kuffe.
Quote | Report to administrator
+1 #8 sula 2022-11-23 09:40
- Hmmmm, shs20m ???????????? naye busajjamwe muli bujoozi ! And nabanja is proud about giving the whole Sermwogerere family ,mabugo of shs20.