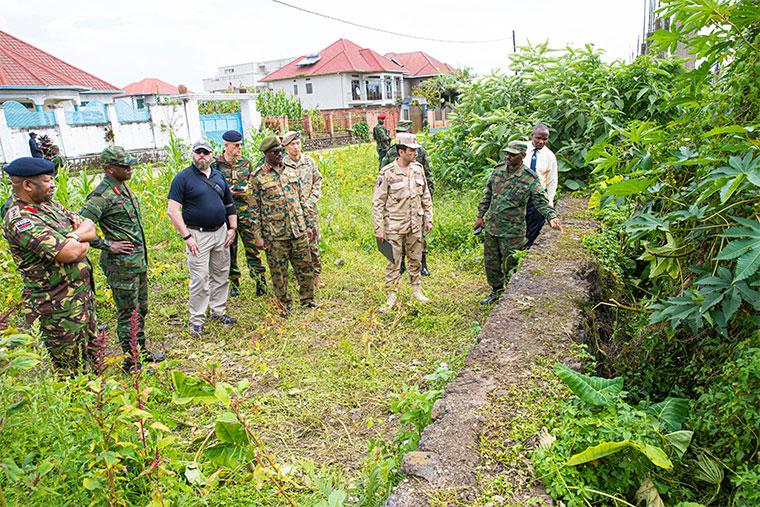 Rwanda army on Saturday shot dead a Congolese soldier whom they accused of crossing into Rwandan territory and shooting at their guard towers.

The yet-to-be-identified soldier was shot at around 1:00 am, according to a statement released by Rwanda Defense Forces (RDF). RDF says the soldier crossed into the Rwandan border in Rubavu district, Western Province. The statement calls upon officials of the regional Expanded Joint Verification Mechanism (EJVM) to intervene and conduct investigations into the border violation by a FARDC (DR Congo armed forces) soldier.

This is the second FARDC soldier to be shot dead this year after crossing into Rwanda. In June, another FARDC soldier was shot dead by the Rwandan National Police (RNP) officers while protesting on Rwandan soil at the same border point. The soldier was killed after he allegedly shot several times and injured two Rwandan police officers who were on official duty.

The second incident happened hours after a phone conversation between Rwandan President, Paul Kagame and Uhuru Kenyatta, the former Kenyan president and the facilitator of the dialogue between the DR Congo-Rwandan government impasse over the March 23 Movement (M23) rebels.

In a press statement issued after the phone discussion, Uhuru said that Kagame had agreed to contribute to the withdrawal of the M23 rebels from the conquered positions in the territories of Rutshuru, Masisi, and Nyiragongo back to their original positions to pave way for dialogue. It is not yet clear if the fresh incident will change Kagame’s mind on contribution towards M23 rebels withdrawing from their captured positions.

In March, June, and May artillery rockets were fired from DRC into Rwanda’s districts of Musanze and Burera, causing injuries to Rwandan citizens and damaging property. On May 28, two Rwandan soldiers were arrested by the Congolese army for allegedly helping M23 rebels. They were later released following mediation by Angolan President, João Lourenço.

DRC has always accused Rwanda of backing M23 rebels but Rwanda strongly denies the allegations. The accusations resulted in the expulsion of the Rwandan ambassador in DRC Vincent Karega. The fighting between M23 rebels and FARDC soldiers that started in March this year also resulted in the fall of the Uganda-DR Congo borders of Bunagana and Busanza into the hands of the rebels.

Rebels claim to be fighting against DRC's bad governance based on corruption, tribalism, and xenophobia among others.  Meanwhile, Blaise Kavungera, the head of state protocol for the province of North Kivu who was arrested on Wednesday last week on accusations of collaborating with M23 rebels has been transferred to the capital Kinshasa for further interrogations.

Kavungera was picked up from Goma city by soldiers attached to the National Intelligence Agency (ANR) and detained in Goma. He was accused of providing information to M23 rebels, according to a security source who declined to reveal his name.

Otherwise, including arbitrary closure of common border; it is high time the Congolese learnt from Ugandans about; how many Ugandans (civilians and security personnel) were shot dead by the Rwandese security forces.
Quote | Report to administrator
+3 #2 kabayekka 2022-11-22 08:51
"Rebels claim to be fighting against DRC's bad governance based on corruption, tribalism, and xenophobia among others." Exactly how can these rebels believe that by strapping themselves with AK47 and fighting tooth and nail for years now against bad governance they will remove corruption, tribalism and xenophobia from the innocent traditional communities residing on the continent of Africa?

It seems that after fighting and killing fellow human beings and winning their wars, they will end up doing exactly the same inequities.
Quote | Report to administrator
-1 #3 Joe B 2022-11-22 20:39
[quote name="Lakwena"]In other words, Rwanda is cold, bloody and unfriendly with all its immediate neighbors: Burundi, DR Congo, Tanzania and Uganda.

Otherwise, including arbitrary closure of common border; it is high time the Congolese lear.......

Ms/Mr. It is not always that we must say something to each and every little thing, if you have nothing to say, don't say it!

Mobutu sent his hopeless men to rape Rwanda on behalf of Habyarimana, they left Rwanda with their tails between their legs! Then the horrible subhumans worse than your kin Joe, run to Congo.

If Rwanda's "pretex" for antagonizing Congo is the issue of Interahamwe, let Congo send them back to Rwanda instead of imbedding then into the Congolese Army, then the world can say; "Rwanda has no business in Congo affairs"
Quote | Report to administrator
+1 #4 Tommy 2022-11-22 22:24
Congo use your resources and build a wall on the rwandan border.
Quote | Report to administrator
0 #5 Lakwena 2022-11-23 10:58
Quoting Joe B:

But Joe B, if Rwandese (same people same language and same religious belief) are not cold and bloody, they wouldn't have slaughtered each other between Oct 1990-1995.

In other words, the RPA/F did not win the war/carnage fighting using brooms.
Quote | Report to administrator
+1 #6 Lakwena 2022-11-23 12:29
And Joe, don't forget that Gen Tibuhaburwa embedded Rwandese refugees; the Paul Kagame, Fred Rwegyema, etc. into his NRA as mercenaries; turned the guns (Ugandan guns) on their long-time host, the innocent citizens of Uganda, who housed, fed healed and educated them.

In other words, such treachery and crime is not little things Joe B. Above all these lot, the manner and arrogance with which they got back to Rwanda, triggered the 1994 Genocide.

And after capturing power and dug in for the last 28 years; they have now turned their backs on the very Regime (NRA/M that carried them on back up to Kigali (Rwanda). Twice in 1998-99 they killed unknown number our UPDF soldiers in Kisangani.

And have now closed border and thumbing their noses at Ugandans. Is this little thing Joe?
Quote | Report to administrator
0 #7 Joe B 2022-11-24 11:39
[quote name="Lakwena"]And Joe, don't forget that Gen Tibuhaburwa embedded Rwandese refugees; the Paul Kagame, Fred Rwegyema, etc. into his NRA as mercenaries; turned the guns (Ugandan guns) on their long-time host, the innocent citizens of Uganda, who housed, fed healed..........

Ms/Mr. Lakwena, Your narrative of things Banyarwanda, shows someone consumed by what only you can understand. Unfortunately we can not exhaust the conversation on this forum.

Please revisit my submition above, I suggested a solution to the Congo problem, I thought you would suggest one too, Just as a reminder the refuges "you" looked after,nurtured and HEALED, many a time they provided cheap labor for the country!

...Ms/Mr. Lakwena, Your narrative of things Banyarwanda, shows someone consumed by what only you can understand. Unfortunately we can not exhaust the conversation on this forum. ...

But Joe, you cannot understand the effect without understanding the remote, medium and the immediate cause.

In other words, intellectual dishonesty and living in denial is our biggest problem. E.g. in all honesty:

1. was the 1959 Rwanda crisis (Genocide) Obote's problem, so that the Rwandese had to flee to Uganda and begin to provide cheap labor in Buganda and/or Ankole?

2. Was it Obote the cause of the 1966 crisis and thereafter? In other words, was the 1964 Lost Counties Question Obote's problem?
Quote | Report to administrator
0 #9 Lakwena 2022-11-25 08:16
3. wasn't it Gen Tibuhaburwa's and NRA Luweero debacle, the invasion of Rwanda by the RPA/F in Oct 1990, the ripple effect of the 1994 Genocide and Reverse Genocide in DRC, vis-a-vis deposing Mubutu in 1998 by the joint NRA and RPF the remote and immediate causes of the current Congo crisis?

Joe, whatever you want to justify, get it from me, the Devil or God, the wounds of war never heals.

In other words Joe, was is an organized mass murder. Else, only those who are least concern for others (evil), have no capacity to love and prevent harm, go ahead to arm, murder, destroy others and/or take their properties.

And Joe, I hope you do not fall in this category who celebrate bloodshed.
Quote | Report to administrator
Refresh comments list
RSS feed for comments to this post
Add comment