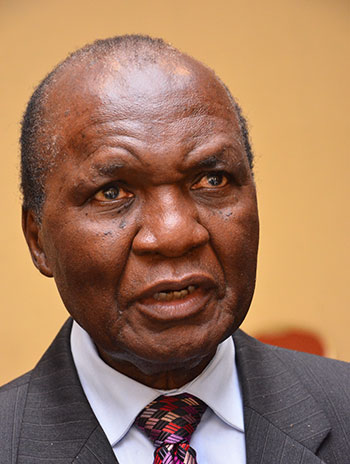 Former Democratic Party president and two-time presidential candidate Dr Paul Kawanga Ssemogerere has passed on at the age of 90.

Ssemogerere who led DP for over 25 years died early Friday at his home in Rubaga. He was born on February 11, 1932, at Bumangi, Buggala island, Ssese.

In 1940, he started formal education at St John’s Boys Boarding primary school. He later joined St Henry’s College Kitovu's primary section before it was abolished. Ssemogerere then went to Kisubi Boys where he completed his Primary Leaving Certificate in1946.

He obtained the Cambridge Overseas School Certificate in 1952. He enrolled at Makerere College, then the University College of East Africa, when it was still an affiliate of the University of London.

He underwent an Intermediate Course (the equivalent to a Higher School Certificate) and, thereafter joined the faculty of Education for a Diploma in Education (Dip. Ed. EA; 1959). Ssemogerere continued to pursue academics even as he practised politics and by 1979, he had obtained a PhD in Public Administration for a New York University.

He took over leadership of the DP in 1972 while parties were under proscription by the military government, and officially became its president general after the fall of Idi Amin in 1979.

Ssemogerere contested for president in December 1980, in the disputed election that led to the Luwero bush war as many believed he had been robbed of his victory. But he did not join the armed rebellion and instead went into parliament to lead the opposition.

After the fall of the Obote 2 government, Ssemogerere served as minister in the subsequent governments, until 1995 when he resigned in readiness to contest for presidency in the 1996 polls that were won by Yoweri Museveni.

+3 #1 Remase 2022-11-19 17:44
Make a correction here, "until 1995 when he resigned in readiness to contest for presidency in the 1996 polls that were won by Yoweri Museveni." Which were "rigged" by M7.
Quote | Report to administrator
0 #2 Zaitun 2022-11-21 16:59
I still remeber those good days when we would be accompanying you and those galant DP candidates, traversing the country to the joy of peaceful ordinary Ugandans but only to be betrayed by the members of the Electorate Committee dying to bring back Obote as president who later realised how their action contributed to declaration of war by a certain UPM candidate, Museveni and his band of scavengers now vying to die in power.
May your soul rest in eternal peace.

Many a Ugandan only thinking of money failed to understnd you for your truthfulness. God bless your soul and be a happy man there where you are!!

Thanks for trying tirelessly to bring peace in a country where citizens were not eager, but only thinking of money. Now, they are regreting while in great pains.

You did your job of a peace lover. May your soul rest in eternal peace. Thanks again for your contribution to seek for peace.
Quote | Report to administrator
Refresh comments list
RSS feed for comments to this post
Add comment