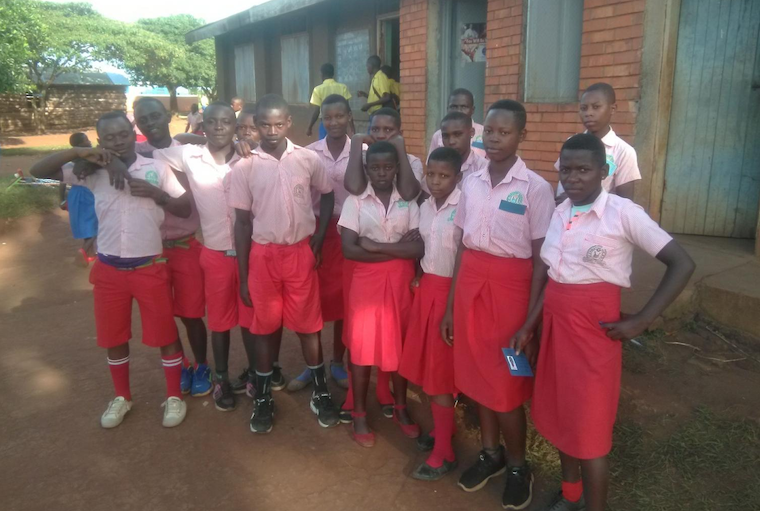 Some of the candidates who missed the exam

The Uganda National Examinations Board (Uneb) is to set another mathematics paper for the primary seven candidates of St.Christine primary school in Kakumiro after they missed out on the earlier exam.

At least 27 candidates of St Christine school in Mwintazige sub-county, Kakumiro district missed their mathematics paper on November 8, 2022, after arriving late for the exams.

The affected candidates had registered at Mpasana primary school Uneb centre in Mpasana town council. The candidates missed the exam after arriving late for the exam one hour and fifteen minutes late contrary to the Uneb rules and regulations.

The examination officials turned away the candidates after arriving at Mpasana primary school Uneb centre in Mpasana town council late contrary to the Uneb rules and regulations.

The candidates were however allowed to write the remaining papers. The candidates had to foot for 15 kilometres to the Uneb centre to write their exams but still arrived late after the exams had already started.

Now according to a press statement released by Uneb dated November 17 signed by Dan Odongo, the executive director body is to set a separate mathematics paper for the candidates.

“Reference is made to an incident when twenty-three PLE candidates of St.Christine primary school missed writing their mathematics examination paper. Accordingly, a consultative meeting was held between Uneb and ministry of Education and sports chaired by the minister Mama Janet Kataha Museveni. It was agreed that considering the exceptional circumstances under which the vulnerable candidates missed the examination after fulfilling all the requirements, the board administers another mathematics paper to the affected candidates. The district inspector of schools (DIS) Kakumiro is hereby asked to report to Uneb for details on the arrangements for the administration for an alternative mathematics paper. The board emphasizes that this is a one off undertaking which “SHALL NOT “be treated as precedent," reads the Uneb statement.

The candidates who missed the mathematics paper together with their parents have since appealed to Uneb to consider them and set another paper for them to write in order not to interrupt their education cycle.

According to the candidates, it was not their own making but rather the mistake of the school management that failed to avail them with transport in time.

Sezi Ayebale, another candidate says Uneb has taken a wise decision saying they are ready to write the special mathematics paper.

Patrick Tibanyenza, a parent to one of the affected candidates says it is a sigh of relief for them now that their children are going to write their paper to continue with their education cycle since they had cleared all the necessary requirements needed. He has however called for punitive action against the school administration.

A total of 4,334 primary seven candidates registered for the Primary Leaving Examinations (PLE) in Kakumiro district this year.

The school Director Pascal Asiimwe and Fabiano Bainomugisha, the school headteacher have since gone into hiding.

Let's wait and see how similar cases will be resolved in future. Meanwhile, 2022 candidates across the country who arrived 15 mins or later, and were subsequently denied to write their exam papers should seek similar relief.

Cases that deserve relief because candidates arrived late include, but not limited to; candidates who walked long distances, those who rode bicycles that broke down, delayed by heavy rains, pregnant children who were walking to exam but had to go and deliver first.

There are very many extenuating circumstances that are more deserving than those who were walking with their teachers. Only God knows what teachers were telling them about the exam in progress as they walked.
Quote | Report to administrator
+1 #2 Justine 2022-11-20 01:16
How I hoped this would be the decision from UNEB. Well done.
Quote | Report to administrator
Refresh comments list
RSS feed for comments to this post
Add comment