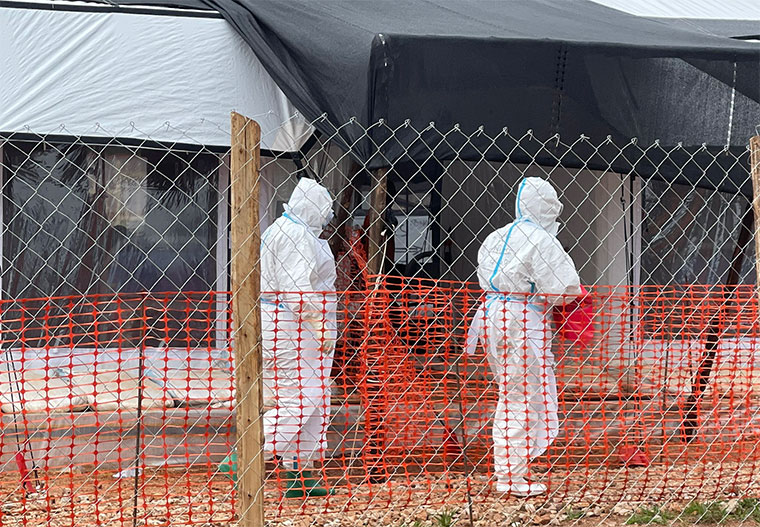 An Ebola isolation unit in Mubende

Still grappling with the aftereffects of the coronavirus disease, Uganda's tourism sector has been hit by another virus, the Ebola Sudan strain.

In March 2020, a global Covid-19 pandemic led to the suspension of travel across and within countries. Two years later, Uganda has been hit with the Ebola virus, claiming over 55 deaths.

President Yoweri Museveni said Tuesday in his address to Ugandans said that he had been informed that tourists are cancelling trips to the country and some had postponed hotel bookings. This comes as the outbreak spread to the Jinja district in eastern Uganda, a favourite destination for tourists.

"This is most unfortunate and not necessary. As you have seen, Ebola, if you follow the guidelines, it will not get you. Uganda remains safe and we welcome international guests," Museveni said.

He also said lists of Ebola contacts are being provided to immigration officials to prevent the virus from spreading outside the country. December is usually one of the peak months for Uganda's tourism industry.

"I've had so far five cancellations from online tourists," she said. "And they have pushed it to June next year. They don't say we are not going to come anymore. But they say, considering the situation that is on today, let's push this to next year."

Before the pandemic, Uganda was getting a little over 600,000 tourists each year. That number nosedived to about 200,000 when Covid-19 hit in 2020, costing many Ugandans their jobs.

Gessa Simplicious, public relations officer for the Uganda Tourism Board (UTB), said that in between the pandemic and the Ebola outbreak, the tourism industry was slowly climbing out of its downturn.

He said industry operators, some of whom borrowed heavily to revamp their facilities, are now facing a crunch as tourism dries up again, while other wildlife destinations like Kenya and Tanzania remain unaffected by the Ebola outbreak.

"And you see this Ebola is only isolating us as a country. So, it means, tourists can go elsewhere for the same thing and omit Uganda," Simplicious said.

The government has tightened measures in two of the most Ebola-hit districts of Mubende and Kasanda by extending a lockdown for another 21 days. It is also banning citizens from seeking treatment from traditional healers and trying to limit individuals' movement in and out of the districts.

+3 #1 Dataf 2022-11-18 01:20
Is visas to Uganda still online only? My friends and I tried but downloading required documents proved impossible and yet we have bought tickets.
Report to administrator
+1 #2 kabayekka 2022-11-18 13:54
"The Uganda government has tightened measures in two of the most native Ebola-hit districts of Mubende and Kasanda by extending a lockdown for another 21 days," It should be very clear to all sensible Africans that are paying taxes and living in this country that soon it will be the tourists who will be voting and running the economy of this country.

The travelling public are well aware that it is expensive to travel. The additional costs of health care insurance, vaccinations against all kinds of diseases and the administration of visas make travelling for the poor an impossibility.

That is why Kasanda and Mubende Ganda territories must remain locked down as rich international tourists are very much encouraged to come over normally and visit this democratic tropical country to their satisfaction!
Report to administrator
+1 #3 rubangakene 2022-11-18 18:09
Of course, tourists like any Ugandan are not immune to E-bola. You see, there were "contradicting reports" that in the beginning about movement control and that is really what did it.

What with this Ebola strain (Sudan) not having any vaccine at the moment, any sensible person would be very afraid to even step foot in our beloved country!
Report to administrator