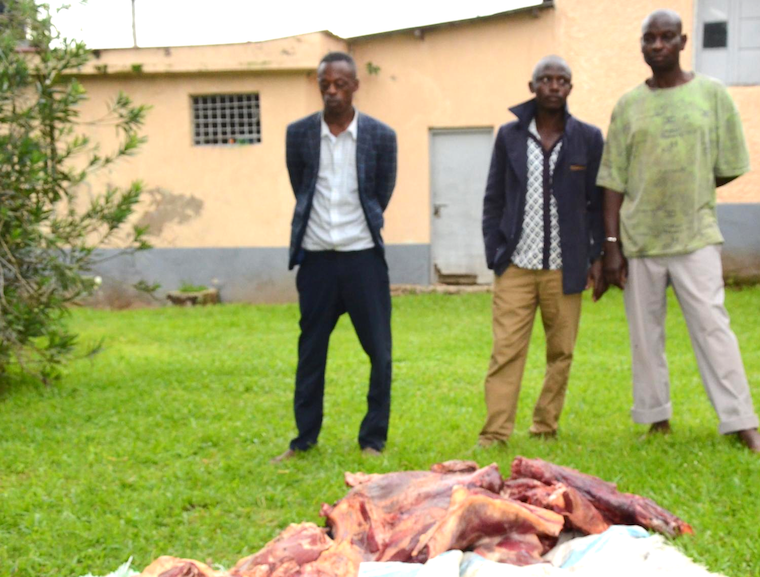 The suspects arrested with their meat

Three people have been arrested in Fort Portal after being allegedly caught red-handed selling over 40 kilograms of decomposing meat to residents.

The suspects, Bashir Rajab, Clovis Isingoma, and Majid Musisi were found with meat from three different cows and a goat.

ying out his routine inspection exercise.

Businge said that he found the suspects selling the rotten meat from wooden boxes in an isolated bushy area behind Mpanga market. He said that rotten meat is unfit for human consumption and can result in disease-causing infections when consumed.

Businge says that the suspects will be charged with violating the public health act, meat rules, and regulations, and suspected theft of livestock.

He adds the suspects will have to produce evidence of where they bought the meat from or slaughtered the animals because towards the Christmas festive season animal theft is rampant.

Businge revealed that in Fort Portal cases of animal theft have been on the increase where 101 animals were stolen between July–October this year.

He, however, says that only 61 were reported to the police. The suspects were handed over to Fort Portal central police station as investigations continue.

Vincent Twesige, the Rwenzori West police spokesperson, said that he had not yet received information about this case as he was not in the city.

0 #1 Lakwena 2022-11-18 07:51
As if condoned Corruption, Covid-19 and Ebola diseases are not bad enough pandemics, these idiots could easily spark off another deadly pandemic like Anthrax!

In other words, this country is becoming unbearably sickening.
Quote | Report to administrator
0 #2 Akot 2022-11-18 15:04
All Ugandans need is; Real GOVERNANCE to ensure National EDUCATION FOR ALL that will chance to jobs for many, creation of enterprices...to ensure Public/Social services!

Without EDUCATION FOR ALL, people will cheat to ensure money for school fees for kids, buy salt, clothes...!

The reason USA/UK/EU are flooding with migrants is because the poor from shitholes now know their only chance to Education, Housing, Healthcare...is in developed world!

But defunct UN still gets billions & for WHAT, if not to ensure bad rule in shitholes, thus migration to developed world?
Quote | Report to administrator
Refresh comments list
RSS feed for comments to this post
Add comment