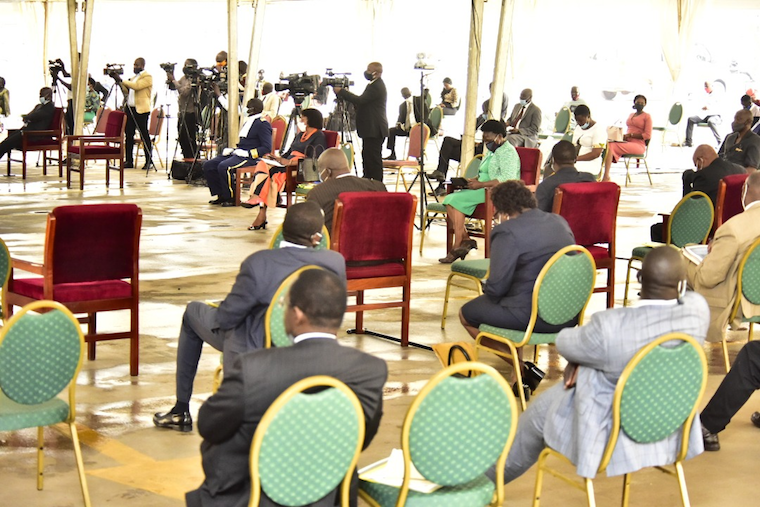 MPs on the parliamentary gender committee have reported that they were denied visas to Saudi Arabia, where they sought to benchmark on the externalization of labour and the related challenges.

The issue came up during the Wednesday plenary sitting after a communication from the speaker of parliament, Anita Among indicating that she had held a meeting with the ambassador of Saudi Arabia, Jamal Mohammed Hassan Al-Madani.

“I met with the ambassador of the Royal Kingdom of Saudi Arabia, we discussed a number of issues of mutual interest between Uganda and Saudi Arabia. They had an agreement already with the late speaker to have a working MOU between parliament and the parliament of Saudi Arabia and we are going to continue with that,” Among communicated in part.

She further told MPs that she had raised the issue of Ugandan workers in Saudi Arabia and the ambassador said that he had held a discussion with the minister of Gender. Among wondered why the minister had not yet reported to the House on what had transpired and the outcome of their meeting.

Following her communication, a section of MPs reacted on the continued mistreatment of Ugandan migrant workers in Saudi Arabia.

“There was a petition by migrant workers and this petition is before the committee of gender. I have been receiving complaints over this matter as the chairperson Uganda Parliamentary Women Association (UWOPA) that the petition which contains their grievances be handled. One of the issues raised is that some of the officials in ministry of Gender who are supposed to handle the matter are related to some of the people who own these companies,” said Sarah Opendi, the Tororo Woman MP.

She asked the speaker to direct the committee on gender to conclude with the petition that was filed last year and present a report to parliament.

In response, Dorcas Acen, the Alebtong Woman MP reported that they had a report but MPs on the gender committee who were supposed to travel to Saudi Arabia were denied visas. She appealed for the intervention of the speaker’s office to help the committee get the necessary information regarding the issue.

Sarah Najjuma, the gender committee vice chairperson also confirmed to the House that MPs had been denied visas to go and benchmark in Saudi Arabia and apologized for the delayed presentation of the report to parliament. Among indicated that she had discussed the issue of visas with the ambassador and that it shouldn’t be a problem.

“Tomorrow, we can process that and the committee will be able to go and get further information,” the speaker said.

However, Among questioned why the committee leadership had not formally sought an extension of time to conclude its work after the 45 days stipulated under the rules of procedure had elapsed.

Among also demanded that the minister of gender presents a report on how labour companies are licensed and the directors behind them.

“Even most of them don’t have capacity….when someone dies there, they can’t even bring back the body. We want to know the criteria used to give these people licenses,” Among said.

0 #1 Akot 2022-11-17 18:24
Ugandans can stay powerless tribally divided ruled slaves, but they MUST not vote in mps any more; the useless parliament is only there to keep Museveni safe, protected legally, officially, constitutionally in power for life, knowing his son is waiting to replace the dad!

Uganda is on the path of being solde & our people just help to ensure they are forever powerless migrants, slaves in the zone formed by their tribal lands!

How is being abused migrants in Saudi Arabia different from being so in Museveni's Uganda?
Quote | Report to administrator
+1 #2 Muswa Edward 2022-11-18 04:06
There is a lot of work to do in Saudi Arabia!it would be good if the government would put more restrictions to the companies

We just survive on God's mercy and grace
Quote | Report to administrator
0 #3 Ce 2022-11-18 04:55
Se of these people are just individuals who have high appetite for quick wealth.

Some friend of mine who works at airport promised to connect me to middle East for a job.

However mlsd must respect the directive directive by the speaker tasking the ministry to present all the licensed companies and their directors
Quote | Report to administrator
+1 #4 kabayekka 2022-11-18 14:12
It is all lots of hot air for this NRM majority parliament. One wonders why the electorate made such a big mistake to elect such misinformed and lazy African parliamentarians.

No wonder Saudi Arabia which is not at all a democratic Arabic country managed to see the political hypocrisy of these political Africans.

The public in this country have many times demanded the hard workers of this country to be paid an official minimum wage without any success.

How come these Members of Parliament want to go to another country and dictate to them how to properly manage their workers?
Quote | Report to administrator
0 #5 rubangakene 2022-11-18 18:32
The Minister has got to get to grips with this immigrant employment issue abroad. She should sit down with the Uganda agents and their overseas counterparts to sign binding protocol in Uganda to ensure employees' welfare before they leave their soil.

We wouldn't therefore need a bunch of MPs to travel to "benchmark", benchmark (compare) with what really!
Quote | Report to administrator
+1 #6 Zaitun 2022-11-18 19:32
The gouvernement of Uganda has to simply accept that it has become a modern slave trader to a former 1è-18th century slave raider.

If the "Slave trading relationship did not exist between Saudi Arabia and the government of ruling clan, why then should the Embassy of Saudi Arabia refuse to give visas to Ugandan Mps wanting to visit children of their own people? What are these enslavers fearing?

Years come and years pass, dynasties come and go, but countries will remain. That oil making you proud will one day come to see the bottom line of its existence.
I hope by that time, your lovely Museveni will still be alive, and Saudi Arabia will be a very fertile country, producing all sorts food stuff!

You enslaved Africans for centuries and continue doing so with the help of your cousin, Museveni.

Leaders come and go, but Uganda will remain but, God willing, a great country tomorrow, governed by indigenous by Ugandans.
Quote | Report to administrator
Refresh comments list
RSS feed for comments to this post
Add comment