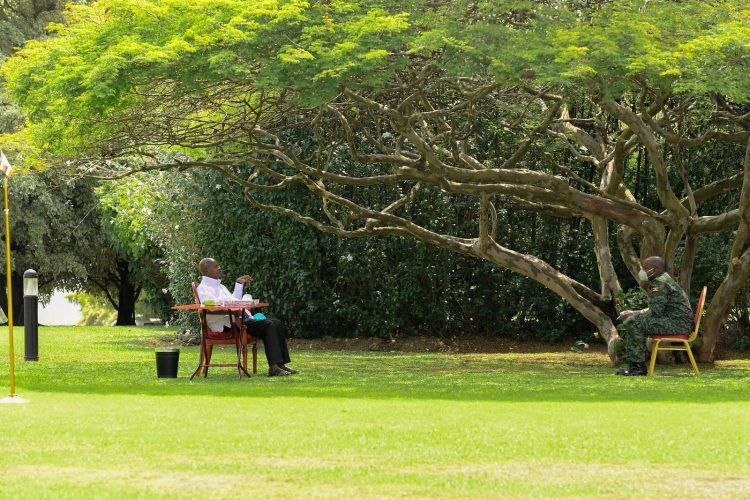 The old guard of the ruling NRM has expressed frustration at President Museveni’s silence as an army of his son’s loyalists continues to mount an early campaign for his presidential bid.

Led by Michael Nuwagira Toyota, the president’s younger brother, the MK (Muhoozi Kainerugaba) movement’s army of adoring loyalists is whipping up the presidential ambitions of the First Son, who has since started expressing his bold desire to lead the country.

The general’s loyalists have launched an aggressive campaign for a 2026 presidential bid for Muhoozi almost a year into President Museveni’s new term. There are branded T-shirts, jumpers, caps, shirts, and posters printed, distributed, and worn by his legion of supporters, loudly touting Muhoozi’s leadership prowess.

These enthusiastic fans are being rallied by Team Chairman (Toyota) MK brand, an organization that supports and promotes the successes of General Muhoozi, who was promoted last month to the rank of general and dropped as commander of the land forces.

Team MK brand plans visits to Arua and other cities. To counter the young Turks, the old guard is coalescing around Vice President Maj. Jessica Alupo, Interior minister Maj. Gen. Kahinda Otafiire, and Defence Minister Vincent Sempijja were some of the leaders who signed a letter last month in support of President Yoweri Museveni’s re-election bid in 2026.

Museveni, 78, has ruled since 1986. In 2026, he will be 82 years old. In perhaps the clearest indication yet that Museveni will run again in 2026, Justice Minister Norbert Mao told youths in the western district of Mitooma that the president had tasked him with organizing a consensus for Uganda’s transition beginning in 2031.

According to Mao, the transition will be in three phases; consensus, endorsement, and implementation of what is agreed upon.

“I appeal for the support of the people of Mitooma and I know Gen. Otafiire will support me in a bigger assignment that President Yoweri Museveni has given me to organise consensus—that is what we need. The transition will be in three phases. Phase I is the one we’re on, phase II is the one I saw you people signing on although some signatures are not clear. Phase II is to implement what we have agreed upon. I believe by 2031 we shall have a new Uganda... Keep yourselves healthy so that you’re there [ in 2031]. Uganda will be built on the dreams of the young people and I’m here to challenge you to dream big. Know your value. It is not about where you’re from, it is about where you’re going,” Mao said.

But the president denied giving Mao such an assignment during an interview last month. Last Sunday, a group of retired army officers, including Otafiire, endorsed Museveni’s candidacy in 2026. And a group of the elderly in Rukiga and the Lira have also endorsed President Museveni as the sole presidential candidate in the 2026 election.

And another group of youthful NRM members of parliament launched a countrywide tour, marketing General Muhoozi as their generational leader and the only capable successor to President Museveni. The campaign began with large posters bearing the imprint “Muhoozi for Presidency 2026.”

It remains to be seen what effect the elders’ movement will have on Gen. Muhoozi Kainerugaba’s hopes of succeeding his father in 2026. He has been rallying young people across the country to back him in 2026.

Muhoozi used his birthday celebrations to tour the country and garner support for his presidential campaign until he abruptly stopped. Alupo told people in Mitooma that the endorsement issue will be brought before the ruling NRM party’s central executive committee (CEC) first for consistency.

“What we have signed today [October 1] is already supported by 70% of Uganda’s population, and therefore we and other segments— the elders and women—will just come to reinforce us to achieve success in 2026. “We will bring that matter before HE the President and the CEC so that there is consistency and an agreed position,” she said.

But senior members of the ruling NRM have appealed to their leaders on the party’s Central Executive Committee (CEC), the highest decision-making party organ, to nudge the president and chairman of the party to convene a joint dialogue to address succession fever and early campaigns.

The continued open campaigns and endorsement crusades staged by different supporters of Muhoozi and Museveni have rattled some senior cadres. Interviewed for this story, Richard Todwong, the NRM secretary general, said he has received complaints from loyal NRM cadres.

He said CEC is in constant touch with the party chairman. He said the president is aware of everything on the ground. Todwong, however, advised those involved in early campaigns to focus on improving service delivery instead of acting like they are decision-makers in the party.

“It’s just one year in office, and it’s not yet time for any candidate and their teams to campaign. I am working hard to resolve any confusion in the party and as of now I have embarked on organizing the different groups involved in early presidential campaigns,” he said, adding, “I am guiding them on how they can have a common goal of helping out the party to deliver quality service to the people.”

Interviewed separately by local media recently, Singh Katongole, the CEC member for the Kampala region, said the committee members are waiting for the party chairman to call a meeting to address the many challenges in the party. Singh believes the numerous unauthorized NRM political gatherings that are loudly endorsing different candidates are splitting the party.

Interviewed, another CEC member who declined to be named, said, “We don’t know whether he [Museveni] is behind those people who are campaigning for his son, Gen. Muhoozi Kainerugaba, to run in 2026. They are disorganizing our party plans. They carry themselves like they are above everyone; so, we want the chairperson to guide us.”

“Putting the Muhoozi project aside, there are people campaigning for President Museveni to stand in 2026; that is why they want something done to avoid bloodshed when both sides clash and fight,” the source said.

The source said Kigongo signed a petition recently endorsing a presidential run for Museveni in 2026. Interviewed for this story, Godfrey Kiwanda Suubi, the CEC vice chairman for the Central Region, said the committee is waiting for the president to speak out. Kiwanda said CEC doesn’t have any problem with Muhoozi’s endorsement campaigns because he is not a member of the ruling NRM and cannot run for president because he is still an active soldier.

“If people who are pushing the Muhoozi presidency are also NRM, that’s not the problem. I believe they have seen an extension of Museveni’s legacy through supporting his son. And if their operations are outside the party structures, then there should be no worry that their activities will disrupt NRM party activities,” Kiwanda said.

Kiwanda said Kigongo didn’t commit any crime in signing a petition supporting Museveni’s candidacy since he is above the secretary general’s orders. However, our unnamed CEC member insists his colleagues want a conclusive solution to the crisis from President Museveni. He said Museveni should stop his son from discussing partisan politics and international relations. As speculation swirls about Gen Muhoozi’s presidential desires, his tweets are growing bolder.

“The only way I can repay my great mother is by being president of Uganda, and I shall do it,” he said in one tweet.

And in another, he said, “The next president of Uganda should come from SMACK.” Muhoozi is an old boy of St. Mary’s College Kisubi (SMACK).

Balaam Barugahara, a known promoter of the Muhoozi project, said in an interview, that the MK movement aims to awaken the old, lazy NRM cadres who have refused to allow energetic, youthful cadres to run party activities effectively.

“We are putting in place structures to prepare Gen Muhoozi to take over from his father when the time comes. We are doing it independently. We are not attached to NRM. The lazy old cadre hates our organization. “They call it diversionary...” he added.

“Those who haven’t set their priorities right are the ones confusing themselves. They don’t know whether to please the son or the father. That’s why they call the MK movement a divisive factor in the NRM party, yet we are providing an alternative, organized substitute for the leadership of the party and country to avoid future succession battles,” he added.

“The party is disorganized currently. It’s full of old cadres that cannot match the energetic, ambitious youth they have kept out of party activities. Right now, we would be the people power, but Bobi Wine rallied youths using the same slogan, and at the end of the day, it birthed the National Unity Platform (NUP). If the NRM party had youths in its operations, we would be stronger than NUP,” Balaam said.

Balaam said the weak NRM party operations steered by the old cadres had created a situation where party members feared to put on NRM branded T-shirts in public.

“The MK movement has brought back sanity.” People now proudly put on NRM T-shirts of all years without fear of being mocked or beaten. “That’s all because we correctly marketed and boosted the party spirit in a way that captured people of all ages,” he added.

“The movement highly respects NRM party guidelines, and we are mandated to support our party and president to fulfill his manifesto of serving the country well until he completes his term.” I disagree with anyone who says we have begun the campaigns early,” Balaam explained.

M7's son knows his dad will rule for life & must be worried he may be old by the time the dad dies of old age! We know demon rulers live +90 years, but this doesn't worry Ugandans as they still look up to M7 to finally give them public/social services!

We should cease to participate in any form of elections until M7 is removed from power.

I'm not asking anyone to go to the bush and use the gun and violence as M7 did.

We, the people, have the power to demand that M7 must go. Now.

Thanks, I love you!

Kyagulanyi, even if the Electoral Commission were to declare you the winner, the army will never handover power to you.

There's nothing you could ever do to change the military to handover power to any duly elected person.

Uganda is under a militant rule designed to keep M7, his family, relatives and tribesmen in power for life!

That can only be changed by the people, not through bogus elections.

We must cease to recognize M7 as a legitimate president of Uganda.

Tribal leaders MUST give chance to UNITY - STAND DOWN NOW, if they want the leave their kids FREE & not slaves of M7's family in the Uganda that is their family business!
Report to administrator
0 #25 Remase 2022-11-19 14:39
Akot, I will always love you, and never forsake you. No one I know of who has called for unity than you.

The other day I heard Kyagulanyi calling for unity at a gathering in Masaka at which both Mpuga and him appeared. Mbu he was showing us how united they are as useful idiots!
Report to administrator
123