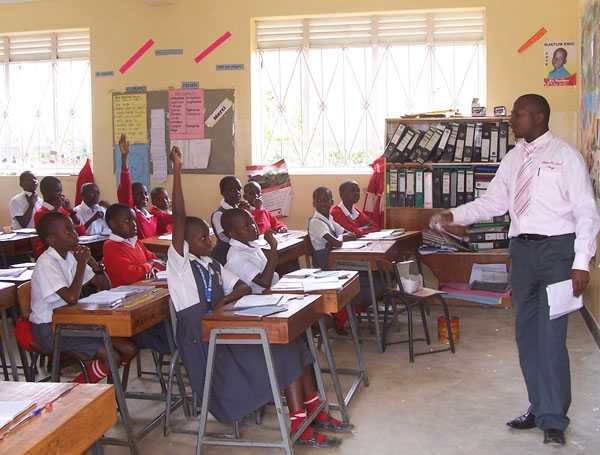 A primary teacher in class

Education activists are calling for a reduction of the primary education cycle from seven to six years.

Uwezo Uganda, an organization known for conducting research on the effectiveness and quality of education made the proposal as part of their memoranda to the Education Policy Review Commission which is currently collecting ideas that will be used to overhaul the education system.

While presenting their proposals, Dr Mary Goretti Nakabugo, Uwezo country coordinator, said that available data and experience from other countries suggest that six years are sufficient for the primary cycle.

"The reason why we're suggesting a reduction of seven years to six years is that there is no evidence to show that the skills that can be acquired in seven years cannot be acquired in six years. There are examples of countries that have tried the six years of primary education including some countries in South Africa, you have next door in East Africa, Kenya - where things are pretty working. Of course, every context is different," said Nakabugo.

Currently, the primary education cycle consists of 7 years, followed by 4 years of lower secondary school, and 2 years of upper secondary school. The 1992 government white paper on education suggested changing the education structure to give eight years at primary (P.1 to P.8), reduce the time at O’level to three years (S.1 to S.3), two for A‘level (S.4 and S.5) before a learner moves to an institution of higher learning.

According to the white paper, having more years at the primary level was intended to increase the age at which one is expected to leave this level of education and allow sufficient time for learning vocational subjects which were to be introduced at the primary level. However, 35 years later, P.8 was never introduced.

Nakabugo who is also a renowned educationist pointed out that in the current primary school cycle much time in some classes is wasted in the revision of previous courses which can be avoided with the system concentrating on the learning outcomes that are expected from the primary school leavers.

When the idea of reducing years of primary education was floated, Col (Rtd) Nuwe Amanya Mushega, chairperson of the commission, made a quick observation saying that it is important to take into account the child's entry into the workforce while recommending an educational structure.

Dr Joseph Muvawala, deputy chairperson of the commission and executive director of the National Planning Authority (NPA), agreed in part with this recommendation and stated that learning outcomes should take precedence over the number of years spent at a certain educational level.

“If a learner can achieve the competencies that we need out of a primary school level. To me, spending less time there than we currently do wouldn’t be a problem. the time we should choose should be on what levels of learning we want,” Muvawala said.

In 2017, Kenya made a review of its education system and slashed the years spent at the primary level from eight years which they had adopted in 1985 to six years.  When Kenya introduced the six years of primary education, they introduced mandatory 2 years of pre-primary.

Borrowing a leaf from Kenya and other countries, Nakabugo went on to add that if P.7 is scrapped, there should be a commitment to encourage pre-primary education. Quoting the Uwezo 2019 report, she said that pre-primary preparation can enable learners to benefit from primary education more efficiently, acquiring foundation skills earlier with less grade repetition.

In addition to reducing the years spent in primary school, Uwezo also recommended that the ministry of Education and Sports considers overhauling the assessment framework to give more room to class-based continuous assessment.

"Introducing continuous evaluation in lower secondary is a recent development that is good. At all levels of education, we want to see more of this. Our educational system is currently focused on who received the highest marks in the national examination, but this is not, in our opinion, an accurate indicator of quality education,” Nakabugo said.

Monica Monge Abenakyo, a member of the commission, challenged Uwezo to be more specific on how assessment can be done, asking them to bring more proposals around this area. For instance, Abenakyo asked Uwezo to showcase the relevancy of Primary Leaving Examinations (PLE) and also inquired as to what level learners ought to be required to take a national examination.

Abenakyo’s question on the relevancy of PLE is not out of the blue given the fact that a few weeks after the commission made a public call to all stakeholders to participate in the education policy review process, the Education ministry informed URN that several Ugandans were calling for the scrapping of PLE.

Several education partners, notably the World Bank, had already taken the lead on a comparable issue. The World Bank suggested eliminating these exams and implementing the automatic promotion policy in its 13th edition of the Uganda Economic Update report. However, this proposal received mixed reactions from Ugandans with a section of educationists advising the government to think twice on the matter.

Meanwhile, the commission tasked Uwezo to give more proposals on the entire education structure, having commented on the number of years that the primary cycle should take. They were told to recommend how many years should secondary, and higher education take.

So, the number of years a child spends before joining secondary education remains either the same or even increases if say two years of mandatory pre-primary is introduced. So, what problem have you solved?
Report to administrator
+1 #3 Zaitun 2022-10-20 17:39
where is the problem with the Uganda system? Is it that our Eduecation system is not working because it is poorly funded to the point that primary school children study under trees, teachers are not well paid, there is lack of equipment and scolastic materials.
How come those of us who studied during 60s, 70s and 80s could emerge the best in EAOSC and EAASC exams?

Instead of agitating for things that will destroy the standard of our Education sysytem fuerther, you better fund the Education Ministry. We need well constructed schools where pupils and students feel at ease while studying, Teachers well accomodated, paid and respected.

Yes we used to boast of our education standard during the years of the anyanyas from the north. With the coming of rogues to power, Uganda has dismally lost her once envied glory as the master in Education system in the region. Today, everything is rotting even University Halls of residence! What a country and shame!
Report to administrator
0 #4 kabayekka 2022-10-21 13:55
Zaitun you have a point especially for adodgy government.

One has seen a financial report praising 1500 dollar multimillionares residing happily in this country. Perhaps it might just help these brains to do better for the education system in this poor African country!
Report to administrator
+1 #5 Oduru 2022-10-21 15:42
Here is another novel idea. Get rid of 3rd year in university because what you learn in 3rd year can be learned in 1st and 2nd year.

Let's also reinvent the wheel and make it square instead of round. I think we have more pressing issues.
Report to administrator