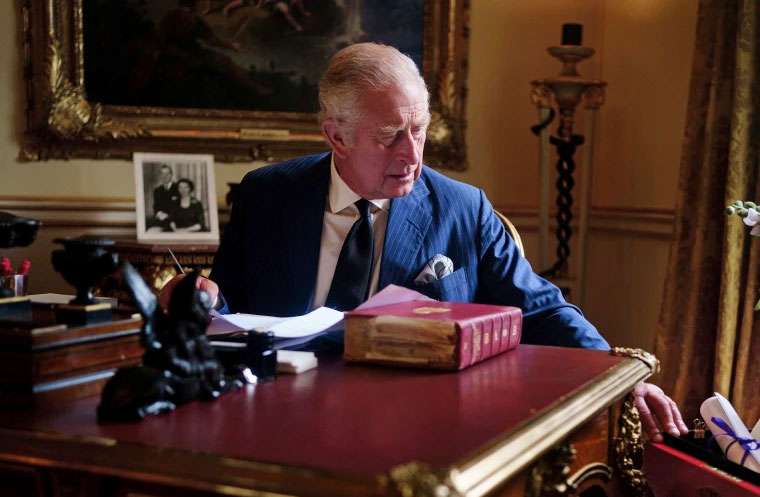 Prince Charles is a demanding boss with a ‘fierce temper and a ferocious work ethic’ who sometimes ‘falls under the spell’ of outside advisers, according to a new book quoting former employees.

One former member of his household described how the King can go from ‘zero to 60 in a flash and then back down again’, although he ‘rarely directs’ his anger at individuals.

‘Things would frustrate him, especially the media,’ the insider told Valentine Low in his new book, Courtiers: The Hidden Power Behind the Crown, extracts of which have been published in The Times.

Former members of Charles’ staff described him as someone with ‘enormous stamina’ and lots of ideas who is ‘always working... seven days a week’.

While the King is ‘very demanding of himself ’ he expects similar from his staff, with phone calls coming ‘at any time’ until 11 pm at night and even at Christmas - the book claims.

‘At any moment he may want to call you about something. Working on his boxes, on his ideas, on his papers. The pace is pretty intense,’ one former courtier said.

Charles is presented as a ‘man on a mission’ with a huge range of interests. As a result, the book describes how he has amassed scores of outside advisers who share their thoughts on ‘architecture, alternative medicine, business, organic farming, housing, Jungian psychoanalysis, Islamic art, rainforests, crop circles and the media’.

Dealing with these advisers’ ‘helpful suggestions’ was one of the challenges of working for Charles, Low claims. The journalist writes that the royal was ‘not always a good judge of who should have his ear’.

‘Jimmy Savile, the broadcaster and charity fundraiser who, after his death, was revealed to have been a serial sexual abuser, wrote a handbook for Charles on how the royal family should deal with the media after big disasters.

‘Charles passed on his tips to the Duke of Edinburgh, who in turn showed them to the Queen.’

One former member of staff suggested these outside advisers sometimes undermined the morale of Charles’ team by suggesting they were falling short.

‘He loves it when someone says, “Oh, they have got it wrong, sir, listen to me. I can see it better; I am outside of this,’’ the source told Low.

‘The prince falls under people’s spell. That could then lead to real problems for individuals.’

The book also touched on the leadership style of King Charles’ son, Prince William, describing how he told staff to ditch suits while working around his family at Kensington Palace.

Meanwhile, another extract of the book - which emerged recently - claimed the Duchess of Sussex believed her marriage to Prince Harry would make her ‘the Beyonce of the UK’.

The ex-actress thought life inside the Royal Family would bring celebrity and ‘kudos’ similar to the US singer but had not appreciated the rules and responsibility that came with her new role, it was alleged.

A palace source quoted in the book, said it was ‘inevitable’ that Meghan would not fit within the tightly regulated world of the Royal Household, and claimed aides found it difficult to work with her. Others said there was a feeling she had ‘wanted to be rejected’ from the Royal Family so she could return to the USA and make money.

A palace insider said: ‘I think Meghan thought she was going to be the Beyonce of the UK. Being part of the Royal Family would give her that kudos.

‘Whereas what she discovered was that there were so many rules that were so ridiculous that she couldn’t even do the things that she could do as a private individual, which is tough.’

King Charles is not at all the person you describe. The UK monarchy uses "Soft Power". They are the epitome of gentleness.
Report to administrator
+3 #2 Akot 2022-10-05 19:22
Henry Baisi, thanks.

UK is formed by real Nations (England, Wales, Scotland, N. Ireland), that elect a Common Prime Minister every 5 years or shorten their terms when they aren't served correctly!

UK has had 8 Prime Ministers while fake country Uganda just have Museveni who considers Uganda his family business!

Unless Ugandans say NO to the tribalistic system & UNITE to show Museveni way out & become owners of zone formed by their tribal lands & put in the kind of governance they want, commenting on what goes on in UK makes no sense!

UK is owned, controlled, governed as the people want with public/social services that attract migrants from shitholes!

But Uganda is owned, tribally divided, controlled by migrant Museveni & Ugandans are his slaves who fight one another to ensure their enslavement to the migrant!
Report to administrator