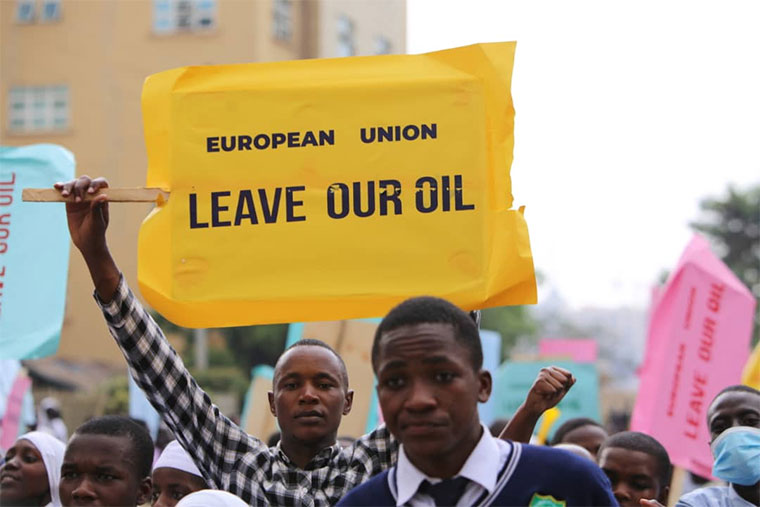 Students protests against the EU resolution

Still facing tough questions from parents over risking their children without consent to participate in a demonstration against the European Parliament resolution on the East African Crude Oil pipeline (EACOP) project, the headteachers now say they were tricked into releasing the students.

Last Thursday, a group of students from various schools marched around Kampala and Hoima streets holding placards and banners asking the European Union to 'leave Uganda's oil' and the EACOP project alone.

This followed an EU Parliament resolution that called for the halting of EACOP for at least a year until the environmental and human rights concerns have been addressed. The Uganda government angrily reacted to the resolution -  with President Yoweri Museveni warning the EU that they have previously defeated 'enemies' of Uganda's economic progress. The deputy speaker went as far as calling the resolution economic racism.

Vice President Jessica Alupo even petitioned the United Nations General Assembly in New York over what she called the hypocrisy of the rich nations on selective condemnation of polluting the environment. The students' demonstration last week was the latest attempt by government to pressure the EU to reverse its resolution. However, several headteachers are blaming top leaders of the Uganda National Students Association (UNSA) leaders for duping them into using their students for personal gains.

Alice Birungi, the headteacher of Bombo Army secondary school, says that the events at Kololo were orchestrated by the leadership of the UNSA and that their students were used as "puppets".

"They sent us letters inviting students for prefects' meetings, but we were taken aback when we noticed our students marching, demonstrating with placards," Birungi said.  "Parents called us to check whether we had allowed their children to attend the protests, but we had no answers!”

Edward Ssekiziyivu, the deputy head teacher of Wampewo Ntake secondary school, says that UNSA duped headteachers saying that student leaders had been invited for meetings with President Museveni and student leaders. Ssekiziyivu adds that they also arranged for prefects to attend the meeting with a small group of staff members but the event that followed shocked them.

"We received a letter inviting the prefects that the president wants to talk to them. That is the letter we received requesting us to send the prefects to Kololo so that they can be addressed by the president. So we made arrangements and sent them with one of our staff. Unfortunately, on coming back, our staff told us a reverse story," said Ssekiziyivu.

Ssekiziyivu who was quoting reports from his staff added that when learners arrived at Kololo, they were informed that President Museveni was busy attending a particular meeting but the Prime Minister Robinah Nabbanja had been delegated to meet them.

He adds: “This lie was soon to be changed as UNSA leaders began manipulating learners into protesting. Our staff attempted to prevent students from participating in the protest, but the children had already been aroused. You already know that secondary students hold such UNSA leaders in high regard and trust them.”

Ssekiziyivu believes it was irresponsible to lure students into protesting without the consent of the school or their parents. He says despite the fact that the protests were police-guarded, it is impossible to foresee situations in which students would be hurt given the kind of protests that often take place in Kampala.

"If they'd told us what was going to happen there because you can't take people's children into demonstrations when they are not consulted. You know the nature of demonstrations, at times, much as they were protected but you never know. For us, the letter we have at school is talking of a different issue," said Ssekiziyivu.

Our reporter was able to access an invitation letter written by UNSA to headteachers. However, this particular letter didn’t mention any meeting with the president but expressly asked headteachers to send 20 student leaders for a meeting to discuss education and other issues of national importance.

The letter signed by Toskin Cherukut, the UNSA executive secretary reads in part: “They should be accompanied by a school patron. UNSA shall take charge of their welfare and refreshment but the schools shall be in charge of transporting the students. The theme of the meeting is; Education for liberation of Africa and national development.  The guest of honour shall be the Rt Hon Prime Minister of Uganda.”

Who brought the idea?

One would wonder why students would choose to demonstrate against an EU resolution at this specific time given all the severe challenges they are facing at their own schools such as rising school fees, a lack of teachers, classrooms, and educational supplies, among others. URN has learned this was not a students' council call.

According to Abius Bakashaba, the UNSA coordinator for the Wakiso district, the national executive members were the ones who first proposed the concept, claiming that it was their responsibility as students to further this worthy cause because it affected both students and the country.

“They said that postponing the EACOP project had an immediate impact on the pupils. Numerous students receive financial aid from oil firms for their schooling. Many people in the oil-related fields are undergoing training, while others have already completed their education and are looking for work,” Bakashaba said.

Bakashaba added that during the first meetings, they had suggested having students from all over the country but it was ultimately decided to have two demonstrations; one in Kampala and the surrounding areas and the other in Hoima, the location of the oil wells. A teacher who attended the meeting in Kampala says he was astounded by the preparedness at Kololo.

"That day, everything smelled fishy," the teacher who requested to remain anonymous stated. "UNSA has written to police multiple times expressing a desire to stage demonstrations in support of various causes, but none of them has ever been permitted. This time, I've been told by the police that it was accepted the day it was delivered. the placards and banners were prearranged and enough for all the demonstrators."

Talking about the issue, Yusuf Werunga, the UNSA president, said they didn’t trick anyone because all they did was on the agenda of the day. He also added that UNSA leadership did not coerce any student into joining the protest but rather explained to them and those who were convinced chose to join by choice.

"UNSA leads students and before students are engaged, they should be talked to consent. We can't force any person to do what he thinks is not right. I would wish to tell you that the people on that day, there are students who said for us we shall not join the cause and we respected that opinion. Whoever joined the cause, you should know joined willingly," said Werunga.

Werunga also defended the need to protest against the EU resolution saying that as students they have a right to defend the country’s interest given the fact that when such interests are fulfilled the students and the education sector benefit.

"The demonstration was in line with the principle of patriotism. We should know that this is a national association and the national association should support all programs aimed at transforming the country, aimed at transforming the lives of citizens. Look, we have students who have enrolled into oil courses, our parents some of them are employees in the oil sector...any attack on such a project is an attack on us, on the lives of our parents," added Werunga.

Meanwhile, when our reporter asked who paid for the day's expenses at the two events; in Kampala and Hoima, amid allegations of having been bankrolled by government and the oil companies, UNSA leaders said that they used part of subscription fees contributed by students to this national body.

+1 #1 Lakwena 2022-10-04 15:08
That is how for 36 years and counting, Ugandans have been duped, by liars and criminals; and into engaging into criminal activities against fellow countrymen, women and children

To lie or dupe others is to mislead in the wrong direction and/or action. Otherwise, for a wise man/person one word is enough.

In other words, if you regularly sit and attentively listen to a liar like Gen Tibuhaburwa because he is the President (leader) of Uganda; you are a fool. And fools listen to what is true as false, and what is false as true and also become liars.

If you listen to the corrupt and/o criminals because they are rich, you will become one criminal. And if you listen to a killer, there will be no reason not to become a killer.
Report to administrator
0 #2 kabayekka 2022-10-04 20:55
One has seen many Ugandan young children lost out on the issue of human rights when their parents have been kidnapped from home as they looked on miserably.

One wonders how patriotic can they be if all the children of this country were pulled out from their schools to demonstrate. By the way, the resolution of the European community seems to advise Africa to reduce its dependence on labor immigration of its people!

Britain alone declares that about 600 immigrants are entering that country everyday running away from the inhumane living and poor economies of their home countries. The point of African development should not mean African citizens running away from the continent of Africa, but rather to stay in African and feel free from never ending imprisonment and death and be able to develop their home continent!
Report to administrator
0 #3 jose 2022-10-10 14:52
His name is werunga
Very funny
Report to administrator