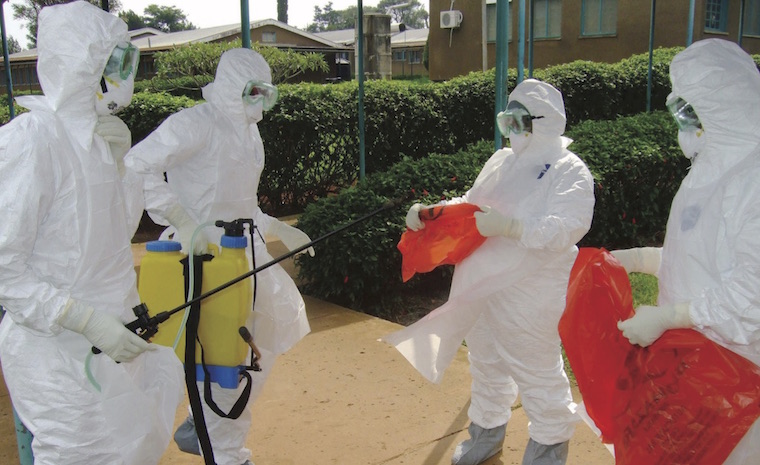 President Yoweri Museveni has accused the media of spreading unwarranted fear about the Ebola outbreak in the country.

In a televised address to the nation, Museveni said with just 24 confirmed cases and only five cases, the outbreak is under control and limited to just three districts, which in any case, are all geographically next to each other.

Local authorities in the infected districts have however previously put the number of dead at about 15. But Museveni, who is still one of the few leaders if not the only one to still practice high level Covid-19 prevention measures including wearing a facemask and social distancing, said the fact that he's calm about the outbreak is signal enough why there shouldn't be any panic.

"You know I'm highly sensitive, so if there was a danger, I would be the first to [lock you down]. I would have locked you out of bars, but this time I'm relaxed and even before you came in. You can see the cases are around one area; Mubende and Kassanda are the same and Kyengegwa is Nabingora is just 30 miles from Mubende town...So for someone to say tourists don't move, you're going to make our people lose things they should enjoy for no good reason. When there was corona [Covid-19], you remember I closed the airport. I would be the first to close the airport but this one is very easy to stop," said Museveni.

The president said, unlike the previous Ebola outbreaks, the Sudan strain that has been reported in Mubende is not very dangerous and therefore can be managed. He called upon the tourists not to cancel their travel to Uganda because of the fear of Ebola.

"We have been seeing in the press, wonderful Monitor. Monitor...Monitor...Monitor newspaper the one which works for the enemy. They have been proclaiming I don't know how many have died but the people who have died here are five. Now the 24 are confirmed cases. I don't know whether the 24 include the five who died...So 24 people confirmed, five of them dead. That means infected but not dead 19. Am sitting here with all the powerful people of the ministry. There is Dr Jane Aceng, there is Dr Diana Atwine, there is Dr Mwebasa. Now from where why do you go to any other place? There is no any other address if you want health matters. There is no other place. Then I also have the prime minister here. These cases I also saw on Aljazeera, Aljazeera quoting wrong figures from Monitor," added Museveni.

He applauded health workers for the job well done so far and pledged that his government was to provide the necessary personal protective equipment (PPE), especially masks and gloves.

Health workers at Mubende hospital this week put down their tools demanding that government provides them with the necessary PPE and risk allowance.

In his address, Museveni admitted that at least six health workers have been infected with the deadly virus and are currently undergoing treatment at Fort Portal and Mubende hospitals. Of the six, four are doctors, one anaesthetist, and one medical student.

The ministry of Health last week confirmed the outbreak of Ebola in Uganda with the epicentre being Mubende district, particularly Madudu sub-county. Subsequently, Ebola alerts have been heard in districts as far afield as Kampala and Wakiso districts.

The media is the only way this can be exposed and addressed. No politicians so far have visited the places affected by the disease because they are afraid to die.
Report to administrator
0 #2 Lakwena 2022-10-03 07:41
Quoting rubangakene:

EBOLA, like the Russian vs Ukraine war are real and present danger. No-one in their right mind should think otherwise.

The media is the only way this can be exposed and addressed. No politicians so far have visited the places affected by the disease because they are afraid to die.

Rubangakene, if a warmonger castigates the media for fearmongering about the deadly Ebola, whom should Ugandans and the world believe?

E.g., since Nov 2021, it is coming to exactly 1 year; his occupation UPDF forces are still in DR Congo (annexing) and blowing up Shs.3bn per day!

And what do see and reports we get?, Nothing except request for extension, and more thousands of Congolese refugee influx into Uganda.

In other words, Evil walks and talkshypo-manically. The guy is thrilled and addicted to: chaos, bloodshed, the smell of deaths and taking credits for his dubious interventions..
Report to administrator