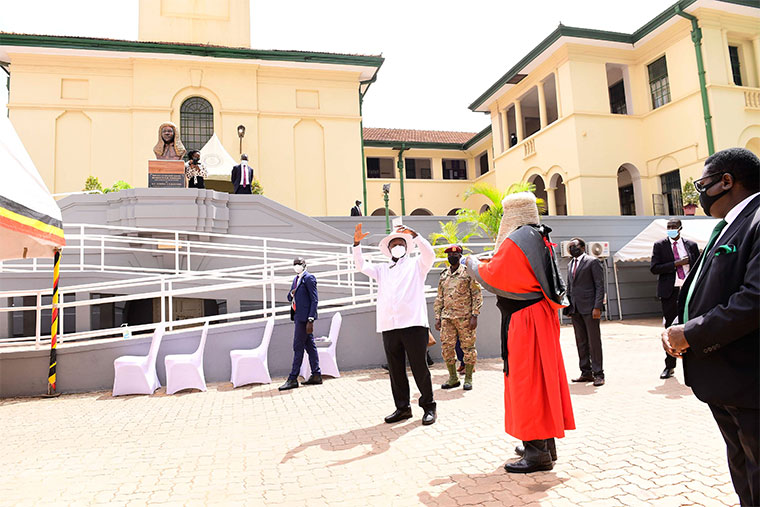 A section of Ugandan lawyers has disagreed with President Yoweri Museveni over his recent statements questioning the independence of the judiciary.

While speaking at the 5th Annual Memorial Lecture of the first Ugandan chief justice Benedicto Kiwanuka, Museveni last Wednesday admitted that his government has sometimes defied court orders and that there is a need to amend the prerequisite for the independence of the judiciary, arguing that the concept is being abused by some judicial officers.

Museveni said that the judiciary cannot be entirely independent of the other arms of the government and proposes that there should be a convergence of principles of justice because he sees a problem if it's only the judiciary that is benefiting to the detriment of the citizens.

The president was responding to the Uganda Law Society president Bernard Oundo, who accused security personnel of not respecting and implementing court orders. Oundo said such practices threaten the independence of the judiciary, rule of law, and constitutionalism.

According to the lawyers, the judiciary’s independence should not be questioned or subject to the amendment because it is provided for under the constitution. Some lawyers have since described Museveni’s statements as unfortunate and regrettable. Humphrey Tumwesigye,  says that it is unfortunate that such a statement came from the president - most especially on a day when the country was celebrating the life of a person who was murdered fighting for justice.

He says such statements are an indication that Uganda has not yet reached a level where every arm of government should be allowed to do its job without influence from the executive.

“Because, when all other arms of government have failed the citizens, the last hope should be the judiciary. That’s why its independence is very important. But advocates and judges must be ready to make the resident district commissioners - RDCs respect court orders and anybody not respecting the court orders should be sued for contempt of court orders”, says Tumwesigye.

Likewise, George Musisi notes that the framers of the constitution did this well knowing different functions for all arms of government and the court was left as the neutral arbiter.  Musisi says that it would be wrong for the executive to start making decisions and disregarding rule of law and to show that it's only one arm of government in fighting for the interests of the citizens.

Stanley Okecho says that the president needs to be lectured on the independence of the judiciary, the tenets, and its crucial role in a democracy. He adds that it is unfortunate that he admitted that the executive has interfered with the enforcement of court orders.

“The executive is supposed to implement the law, parliament legislates, and the judiciary interprets. In the event that there has been an erroneous interpretation, structures within the court system can remedy all injustices. I acknowledge the fact that he admits that some of our problems are historical”, said Okecho.

Andrew Mumpenjje argues that a court order is valid until set aside by that very court or an appellate judicial body, and therefore, enforcement of court orders cannot depend on the moods of the president and its agents as this erodes both the rule of law and independence of the judiciary.

Phillip Munaabi contends that it is becoming a common practice that Museveni uses such kind of language and gestures whenever he gets a chance to address a gathering of the judiciary and the lawyers.

Munaabi says the amendment Museveni seeks is already enshrined in the mission of the judiciary which states "to be an independent, competent, trusted and accountable judiciary that administers justice to all and therefore Museveni ought to let the courts and its officials operate free from interference.  He notes that short of this, Museveni is creating power dockets outside court that may one day act against his interests.

“His RDCs and security forces are not lawmakers but should act within the confines of the law. I have seen complaints by the president himself to authorities about people grabbing his land in Gomba, he has defended several presidential election petitions before the courts of law and he has respected and accepted the orders therefrom. This way, he is seeking for an independent and unbiased opinion from a third party because what belongs to him without a 'convergence of principles of justice," added Munaabi.

+4 #1 Apollo 2022-09-26 09:55
I must admit that I always experience a weird sense of helplessness every time I witness a ravenous contest between hyenas and lions over a dead carcass.

None of the two 'meat eaters' will think for second that the dead carcass too was a living, breathing animal that was part of the ecosystem. In the instant, the battle of wills must be decided between the two protagonists and that is what matters. Until the next hunt.
Report to administrator
+6 #2 Miko 2022-09-26 12:06
All the semantics is baffling. My simple understanding is that the president swore, on assuming office, to uphold the Constitution of Uganda.

The independence of the judiciary is enshrined in the Constitution. His comments in their simplest and purest form are against the very Constitution he swore to uphold.

It is not rocket science to see that what he is saying is unconstitutional. The President does not need to be lectured on the law. He simply needs to use common sense.
Report to administrator
+2 #3 Figo 2022-09-26 13:27
It’s unfortunate that the judicial arm of government is filled up with inkompetent self seeking cadre judges!

Imagine that so called chief justice (owiny dollo) together with a bunch of his associates, they can only stand and look on, and even aplaud their demi god, wicked dictator (museveni)!
Report to administrator
+2 #4 kasede 2022-09-26 19:31
Quoting Miko:

All the semantics is baffling. My simple understanding is that the president swore, on assuming office, to uphold the Constitution of Uganda.

The independence of the judiciary is enshrined in the Constitution. His comments in their simplest and purest form are against the very Constitution he swore to uphold.

It is not rocket science to see that what he is saying is unconstitutional. The President does not need to be lectured on the law. He simply needs to use common sense.

The problem is this: THERE IS ABSOLUTELY NEITHER A MECHANISM NOR A A PROCESS THAT CAN TREAM THE PRESIDENT'S MISUSE OF STATE POWER. FOR EXAMPLE, OUR PARLIAMENT IS HIS RUBBER STAMP.

THE JUDICIARY TOO, WHEN IT CAMES TO A CONSTITUTIONAL ISSUE, SUCH AS A DISPUTED ELECTION PROCESS & RESULTS.
Report to administrator
0 #5 Lakwena 2022-09-27 10:08
I am always disturbed that: seemly reasonable Ugandans continue to confer, refer and bow to Dictator Gen Tibuhaburwa as the "fountain of honor", who should be doing the right thing.

Never! It is self-evident that the guy and lot, came to power through all the irredeemable criminal means at his/their disposal: subversion, terrorism, Organized murder (unjust civil war, massacres), looting, the Central and commercial bank-robberies, hijacking, etc.

How on earth can such diabolic and unrepentant person be the "fountain of honor'?

For Heaven's sake: in 2017, the thug finally spoke his concealed motive to power, and told us off that he is neither our servant nor employee.

In other words, for the last 36 years and counting; every 5 years the man "swears/calls the name of the Lord/God "in VAIN", to protect and defend the 1995 constitution, which his criminal mind does not believe in (a piece of document not worth wasting his selfish time).
Report to administrator
0 #6 Lakwena 2022-09-27 10:30
Dictator Tibuhaburwa is strangleholding unto our State House because, he is as Guilty as Sin.

As long he lives; everything that he has done, said and continues to do and say, will be held against him. Which is why the thug in him vulgarizes the Uganda Police as PARASITES and bastardizes and intimidates the Judiciary.

E.g., in Dec 2020, the thug said that he knows the SFC Commando soldiers who murdered Boxer Zebra in a hail of bullets.

In other words, except criminals like Gen Tibuhaburwa, who aid and abet crime; a law-abiding Ugandan citizen would have reported the murderers of Boxer, Zebra to the "Nearest Police Station.
Report to administrator
0 #7 PaulM 2022-09-27 12:13
Museveni wants us to start following jungle law. It's time the constitutional provision that a sitting president cannot be sued to be revisited.
Report to administrator