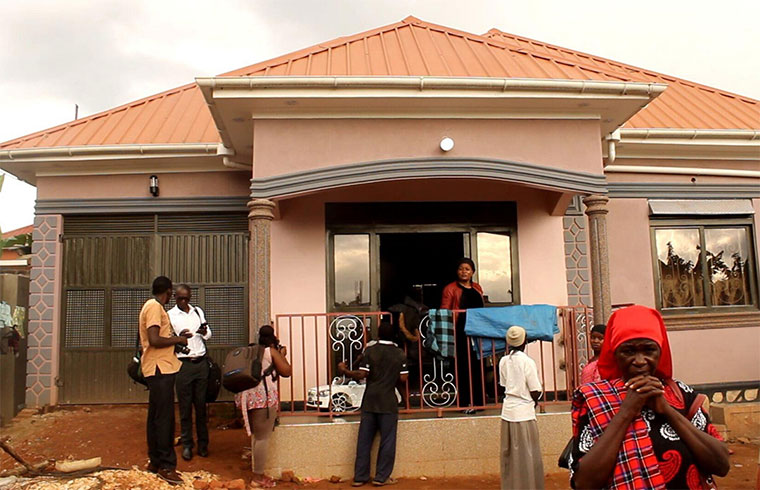 Esther Nankya's house where she allegedly killed the two children

Police have arrested Esther Nankya, 29, a resident of Kikubankima in Mukono municipality on allegations of killing her two children in suspected human rituals. The deceased children are Shaban Kamoga, 6, and Ramathan Lubega, 3.

It is alleged that the minor's father, Musa Kamya returned home and didn't find anyone to open the gate for him. He decided to call his wife on the phone but she claimed she was unwell, prompting Kamya to open the gate himself. According to Kamya, when he entered the house, he was welcomed by the lifeless bodies of his children lying in a pool of blood in their living room. Between the bodies was a bible.

Kamya raised an alarm which attracted other residents, who reported the incident to Mukono central police station. The officers protected Nankya from the wrath of the charged residents. Denis Kirya, the area defense secretary, says that Nankya looked like she was demon possessed when they arrived at Kamya's home and they found it hard to contain her.

The village LC I vice c hairperson, Kalebu Bbongole has appealed to the government to streamline the process of establishing new churches in the area. According to Kalebu, Nankya has on several occasions appeared in public preaching the gospel in the village while calling residents to spare time to visit her home for prayers.

Luke Owoyesigyire, the Kampala metropolitan police deputy spokesperson, says that investigations into the matter are ongoing. He says that officers who responded to the scene saw several marks on the necks of the victims. It is alleged that the suspect strangled the victims before hitting them on the wall several times until they died.