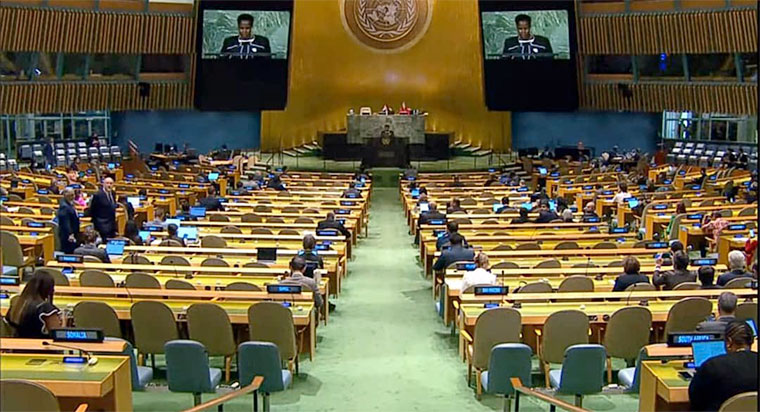 Uganda has further expressed its dissatisfaction before the United Nations over the European Union parliament's resolution against the East African Crude Oil Pipeline (EACOP) project.

Vice President Jesca Alupo who represented President Museveni at the UN General Assembly meeting in New York, said that it is hypocritical for countries that are at the centre of polluting the environment to begin preaching to countries which have borne the impact of these environmental violations how to act responsibly.

"It is regrettable and hypocritical that some of the regions and nations that mismanaged the environment and are disproportionately responsible for global warming have embarked on a rigorous campaign to thwart efforts of other countries, to responsibly and sustainably develop the oil and gas sectors. Our view is that development should be environmentally friendly, inclusive and provide benefits for all; it should leave no one behind,” Alupo said.

She explained that the African continent like many developing regions of the world suffers the effects of climate change to a disproportionate degree and that Uganda has continued to experience prolonged droughts, floods, erratic rainfall patterns, landslides and melting of ice caps at its highest mountain; Mt. Rwenzori despite contributing an insignificant amount of global greenhouse gas emissions.

Citing environmental concerns and human rights violations, the EU parliament last week called for a year-long halt to the construction of the 1,443 kilometres pipeline that runs from Bunyoro in Uganda to Tanga in Tanzania. The resolution solicited both applause and condemnation from some sections of the Ugandan political intelligentsia and the general public. Those in favour of the resolution argue that it will foster openness in the project while those against argue that it’s a flagrant violation of the country’s sovereignty.

In her address, Alupo added that Uganda has continued to scale up investments in climate adaptation and mitigation measures such as; increasing access to clean energy to enhance production and increasing forest and wetland cover among other interventions. However, she added, the world must understand that climate change actions must uphold the principle of equity and common but differentiated responsibilities, consistent with the national context.

“We, therefore, urge the developed countries in line with the Paris Agreement to fully deliver on the $100 billion goal commitments per year, to assist developing countries in their climate change actions to mitigate the adverse effects,” Alupo said.

Meanwhile, the vice president also stressed the need to reform the UN security council to have a proportional representation of Africa.

“The present geopolitical realities are more compelling for a comprehensive reform of the security council to make way for equitable representation. Africa with more than one billion citizens, and with over seventy per cent of issues on the agenda of the council, continues to suffer the historical injustice of having no representation in the permanent category of the security council, and is under-represented in the non-permanent category too,” Alupo said.

She called upon the UN member states to continue pushing toward an equitable representation so that what she called a long-standing injustice and imbalance towards Africa are addressed.

On the conflict in Ukraine which is overshadowing the meeting, Alupo said that a military solution should be ditched in favour of a negotiated settlement to end the conflict whose reverberations have been felt as far afield as Uganda.

“The Russia-Ukraine military conflict continues to cause more suffering, destruction and displacement of the civilian population, mostly women and children. The longer it persists, the more suffering, destruction and displacement we shall witness. We are deeply concerned about the loss of lives and the serious humanitarian situation. Uganda supports dialogue to reach a peaceful resolution to the crisis. My president has said many times...We think the best way is to negotiate. Everybody who wants peace in the world should support negotiations to get balanced peace that ensures safety for all,” Alupo said.

The most sickening is that USA/EU/UK are still members financing the now defunce, useless, inhuman UN that is helping demon lifetime rulers destroy the world!

UN serves no purpose today, except sink the world deeper in crises, while demon rulers spit on the world at such conferences!

USA/EU/ are still members of UN when they are at pain getting reelected, UK mps forced to stand down within 3 years, while Putin, Museveni, Jinping, Kagame, Erdogan...control UN & the world!

USA/EU/UK MUST get out of UN, to save the world from demon rulers!

Why did Arupo only concentrate on the environment aspect and completely say nothing about the clear human rights abuse in Uganda? The talk about dialog and how much Uganda supports dialog over a military solution, right? Arupo, how did M7 come to power?

There was an opinion of dialog in the peace talks in Nairobi, but M7 chose war over dialog. We had elections in 1980 and M7 declared war way before the elections were held.

M7 has maintained violence against Ugandans ever since he captured power by means of violence in 1986!

Arupo, why didn't inform UN that M7 is a violent individual by nature and will never respect human rights in Uganda? Cork sucker!

The European Parliament has genuine concerns, some are selfish but am sure they consulted with their partners in crime at the UN before making that decision public.

Besides, Alupo has no abilities to lobby such a group of egocentric fellows sitting at the UN. So long as the issues that were raised in that resolution are not addressed.

USA/EU/UK MUST save the world; get out of UN & forming a real humane body, NOW, before the now defunct UN helps demon rulers destroy even developed countries through unending migration!

USA/EU/UK MUST not wait until their frustrated people bring their systems to complete stand, as then, demo rulers will be in complete control of the world!

My Oil is all of a sudfen turning into our African oil.

So then how is the UN going to say when Russia is the best friend of Uganda and Ukraine deserves all the beatin it has ever received!

UN is only reaffirming it's USELESSNES in today world!

But USA/EU/UK can save the world by getting out of UN NOW & forming a real humane body!

Time the PEOPLE of United States of America, EU, British, wake up too, to ensure their leaders are given peace in posts, so that they tackle the real world problem; BAD/EVIL rule by demon rulers!

This will begin the moment USA/EU/UK end memsbnership of now defunct UN bent on ensuring bad rule, dictatorship, wars, migration... that is the main cause of political/social unrest in developed world.

Ugandans MUST show Museveni way out in UNITY, NOW, or they will be ousiders in the world for good!
Quote | Report to administrator
0 #15 Wainanchi 2022-09-26 08:05
But didnot ugly Europeans try to derail Uganda oil exploration by Tullow oil also from the same Europe and didnot Tullow oil accuse our president of taking bribes and didnot our president anfily respond to that that he was SSEBALWANI and never ever took any bribe from anyone..Hellooooo.

And now cut from Russoa oil the same Europ Iis restarting to use " dirty" technologies coal , wood oil to generate heat and to prevent her citizens from freezing
Come on old Euripe you can do better!!.

Do not show your old ugly colonial face when you had enslaved Afrocans and exported then in huge numbers ro Anerica.

I would now I'd I were African countries ask old Euripe to pay eeoatriatins to the same African countries it used to enslave and steal their resources to pay back them
Quote | Report to administrator
0 #16 Wainanchi 2022-09-26 08:11
And also I would gather all African countries to sit down and delinerste on.these unheard and uncivilized measures and ugly proposals and request each and every Europwan country England,Belgium France Germany Italy and others to refund all stolen riches which they plundered from.African

I would organize round table of African counties and experts to investigate what was taken and stolen from Africa and to evrefunded.Why not?

Take for example Nazi Germany.
Germany today had to repay forbsaneges it caused to its victims if Nazu occupation in huge reoaretiosm
Why Africa would be excluded.?
Quote | Report to administrator
+3 #17 Odinga Owiny 2022-09-26 08:57
Citing environmental concerns and human rights violations, the EU parliament called for a year-long halt to the construction of the pipeline and VP Alupo spoke many words but amounting to nothing worthwhile as long as she skipped the core of the problem, human rights abuses in Uganda!

Why did her speech writers conveniently leave it out and instead jumped to the Ukraine and Russia war? You see all the hallmarks of Museveni trickery and hypocrisy in VP Alupo’ so called address.
Quote | Report to administrator
+2 #18 Odongkara 2022-09-26 11:22
Uganda human rights violations and brutalization of opposition politicians, are hard for anyone to deny because they have been rampant in Museveni’s govt.

Some of the Museveni sins are criminalizing opposition politics and demands that these must stop. When free speech and the right to protest are basic rights enshrined in many international instruments to which Uganda is a signatory, Police has been oriented to consider it criminal for the President’s opponents to enjoy such constitutionally guaranteed rights and freedoms.

We can't turn to blaming the Europeans under the "colonizers" stale rhetoric. The Europeans left us more than 50 years ago but what better things have the so called African presidents apart from brutalising their fellow Africans?
Quote | Report to administrator
+1 #19 Henry Baisi 2022-09-26 16:45
Uganda cannot win a diplomatic row with the EU. Diplomacy is a unique profession that is not taught at school.

You learn it on the job by interacting with colleagues from other countries. Without taking sides, I ask everyone to leave diplomacy to the diplomats. If they are all not there, I can come from my voluntary retirement and help out.
Quote | Report to administrator
12
Refresh comments list
RSS feed for comments to this post
Add comment