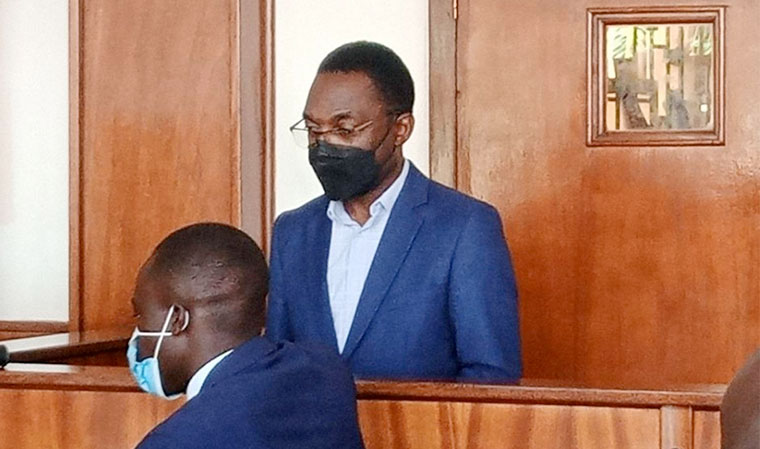 Cornwell Muleya in the dock

Buganda Road Chief Magistrate's court has ruled that the former chief executive officer of Uganda Airlines, Cornwell Muleya who is accused of disobedience of orders requiring him to record a statement has a case to answer.

Court presided over by grade one magistrate Asuman Muhumuza ordered Muleya to prepare his defense over the allegations that were levied against him.

It is alleged that on May 23, 2022, the Inspectorate of Government (IG) summoned Muleya to provide documents regarding the mismanagement of public funds, procurements, and recruitment of staff at Uganda Airlines. But Muleya failed to show up without any justifiable reason, prompting the IG to arrest him on June 22, 2022, for disobeying lawful summons.

Muleya was subsequently charged but denied the allegations saying he is innocent which prompted the prosecutors to conduct a trial with three witnesses. The witnesses included the supervisor of special investigations at the IGG's office Gideon Abudum who told court that he was in April 2022 assigned a file to investigate the alleged corruption at Uganda Airlines and he retrieved some documents,  analyzed them, summoned and interviewed some staff of the airlines. But Abudum’s efforts to get Muleya were futile.

The witness added that they later received a letter from Muleya's lawyers questioning the way in which their client had been summoned. This was after the IGG sent Muleya an email and required him to report with his passport. Court heard that the IGG afterwards held a meeting with Muleya's lawyers who said he was out of the country and it was agreed that they represent him, but this did not happen.

The second witness was Loreen Akello a police officer who arrested Muleya after tracking down his phone calls and establishing that he was actually in the country, using an Airtel number registered in the name of Catherine Ahimbisibwe.

Further evidence was from Francis Kabera, the security manager of Airtel who said that the phone number that was investigated although it was being used by Muleya, was registered in the name of Ahimbisibwe and the user’s location was mostly around Entebbe Zoo and Entebbe airport terminal implying that it was Muleya.

In his ruling, Muhumuza said that the evidence from the witnesses was more than sufficient to establish a prima facie case against Muleya. He explained that the ingredients for the charge of disobedience of orders such as establishing if the order was served to the accused and whether he refused to comply with it have all been proven.

Muhumuza said that the testimonies contained serious allegations that required Muleya to defend himself. Muleya told the court that he will be the only witness in the case. Muleya through his lawyers led by Charles Nsubuga, asked court to temporarily release his passport to enable him to travel to Equatorial Guinea and Sierra Leone on October 15, 2022, to do business consultancy.

But prosecution led by Rogers Kinobe asked court to reject Muleya's application on the basis that the timing wasn't proper since the court has already ruled that he has a case to answer and therefore he might abscond from the trial.

Kinobe said if the court is convinced to return his passport, Muleya should then deposit collateral with the court which should be worth compelling him to return for his trial. But in his ruling, Muhumuza agreed with the prosecution and declined to grant Muleya’s request for bail. Muhumuza has ruled that there will be an expeditious hearing of Muleya's case to enable him to know his fate soon.

He adjourned the case to October 7 for Muleya to start defending himself. On April 21, 2021, Works and Transport minister, Edward Katumba Wamala sent  Muleya and 12 other top officials of the airline on forced leave on the orders of President Yoweri Kaguta Museveni to pave way for investigations into allegations of financial mismanagement, collusion, and nepotism in staff recruitment among other issues.

In February 2022, Works and Transport ministry permanent secretary terminated Muleya's contract forcing him to file a complaint with Wakiso District Labour Office on April 4th, 2022 citing unlawful termination of his contract. However, the labor office referred the matter in which, Muleya is seeking more than Shs 3 billion compensation to the Industrial court.

+2 #1 Henry Baisi 2022-09-24 17:46
Mr. Muleya is an expatriate who came to Uganda to help us start our Airline. He was fired from the job. Please let him go -wherever he came from.
Quote | Report to administrator
0 #2 Wainanchi 2022-09-26 08:17
Look.at these young crooks.
While we were fighting to liberate Uganda they were small babies struggling to survive
Uganda National Liberatiln Army and its political.wing NRM crasted modern and progressive society and these " smart asses" finishing schools concenttsvted in how to find loopholes and robbed the country which helped them grow and prosper

Book them your Honor Judge to long incarceration to tepsy for what they have stolen
Look.ar this greedy and crooked face.

Uganda gave thwn piece of bread but tjrh are greedy and hungry.They want it whole for them like air many other ugly thieves in Uganda.
We see them.in all places,robbing and stealing and well connected.
Quote | Report to administrator
0 #3 Henry Baisi 2022-09-27 18:48
I love your comments mon cheer ami Wanainchi! What would Uganda be without people like you? I will be in Kampala shortly, where can I find you?

A few months ago, you promised to take me to Kyankwanzi if you could find me.

Now that I will be in UG Kampala shortly, please tell me where I can find you to follow through. I would love to get training from a real liberator like you mon cheer ami!
Quote | Report to administrator
Refresh comments list
RSS feed for comments to this post
Add comment