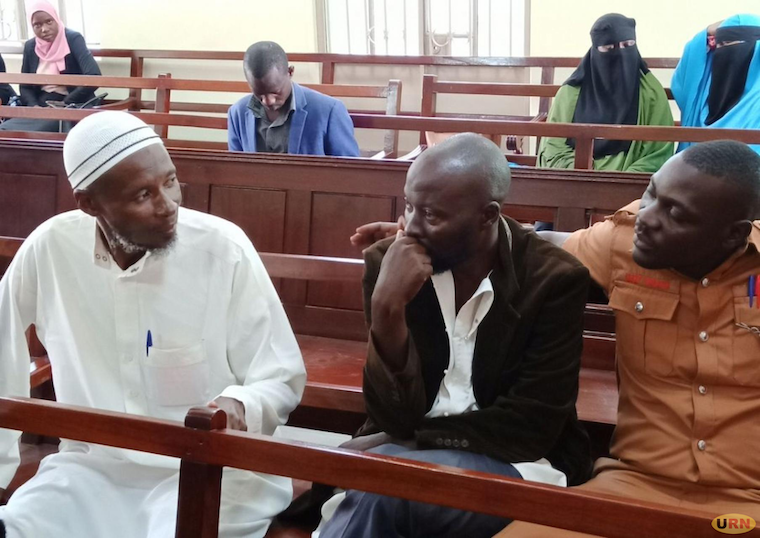 Former Buyende district police commander Muhammad Kirumira was trailed for three consecutive days before he was eventually gunned down on September 8, 2018, a state witness has told court today.

Police detective Steven Walimbwa, the 10th witness was testifying in the case in which two people are being accused of the murder of Kirumira before court presided over by lady justice Margaret Mutonyi.

It is alleged that Abubaker Karungi and Hamuza Mwebe, with malice aforethought, unlawfully caused the death of Kirumira and Mbabazi by shooting them along Bulenga town on Mityana. Walimbwa told court that he recorded a charge and caution statement from Karungi who told him that he had been assigned by Abdurahman Kateregga to alert him when he sees Kirumira's vehicle.

Court also heard that Karungi reportedly did not know Kirumira's vehicle, but he was picked up from Masanafu by Kateregga in his pickup vehicle and taken to Bulenga at the parking yard where Kirumira used to park his vehicle.

According to the witness, Karungi was promised an unspecified amount of money if he spots the vehicle that had been described to him by Kateregga. As result, he reportedly went to the parking yard on September 6 and 7, 2018, failed to see it but succeeded on the next day when Kirumira and Mbabazi were murdered.

Court also heard that when Karungi spotted Kirumira's vehicle, it was parked outside the parking yard, and inside were Kirumira and Mbabazi, and quickly alerted Kateregga at around 7 pm. Later, Kateregga came riding a motorcycle carrying Mwebe who was in possession of a submachine gun (SMG) and was dressed in a black jacket.

As Karungi was leaving, he heard gunshots and he together with Kateregga entered the pickup, and Mwebe rode a motorcycle and proceeded to an unknown destination.

According to the witness, Karungi later went to his mother's place in Mpigi district where he spent a night. But Karungi’s lawyer Zefania Zimbe asked court to retract the statement on the basis that it was written by security personnel and that their client had signed it under duress after he had allegedly been beaten and subjected to torture.

However, in her ruling, Mutonyi declined to retract Karungi's statement and asked the defense lawyers to cross-examine Walimbwa.

The hearing of the case which is being conducted under a special session will continue tomorrow Friday when prosecutors led by the assistant director of public prosecutions Thomas Jatiko and state attorney Joseph Kyomuhendo adduce more evidence in the case.

One of the suspects, Kateregga was shot dead by security agencies in 2018 and was believed to be a member of the rebel group the Allied Democratic Forces (ADF).

Let them hoodwink themselves. In any case , they paid Kirumira's father the cost of his life. So what is the importance of the nonsense you are reporting to us evoking all the pain.
Allah will try those who massacred him.
Quote | Report to administrator
+1 #2 WADADA rogers 2022-09-22 17:47
comedy, kirumira was not killed by those innocent Muslims, the killers are in the security circles, they must be laughing seeing innocent people in the dock. Fortunately, the accused persons will not be found guilty
Quote | Report to administrator
+3 #3 TIBAMWENDA MUBARACK 2022-09-23 17:44
Kirumira was a hard-working police officer, they trailed him for three days?

That's so abusive to a trained officer who knew his was in danger, stop undermining this hero, allow his soul to rest in eternal peace . Police has never had a committed officer like Kirumira.
Quote | Report to administrator
0 #4 Wainanchi 2022-09-26 16:05
Your Honor Judge in this case.
We agree to disagee with lying defense and propose that you order those assassins to be hanged on a very ta tree in Kampala and live them to.hang there so that everybody can see them and shout
.
Eeeeeeeee!eeeeeeee! Look at this!
Look at this!! Mama nyaboooo.
Eeeeeeeeeee
In the meantime the crows and other flying birds could pick their eyes and eat their flesh.
Thos is ,Your Honor, the only possible and just verdict

Anything else is the pervert of justice and injustice.
Your Honor please do the right thing and send them to their Maker.Please!!!
Quote | Report to administrator
Refresh comments list
RSS feed for comments to this post
Add comment