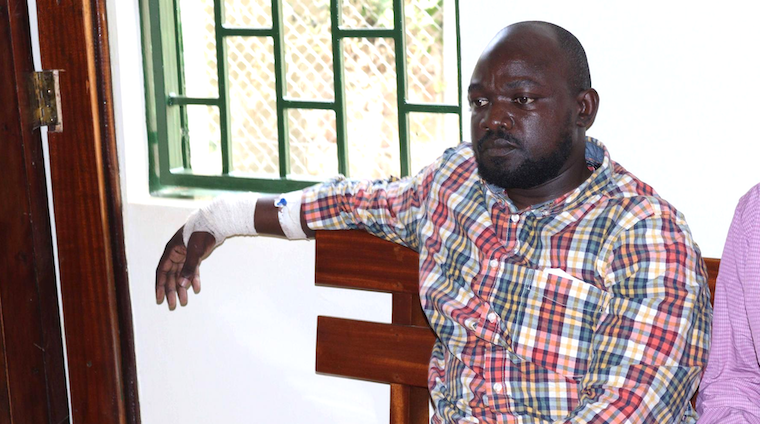 Nadduli who is battling charges of promoting sectarianism was released on bail by grade one magistrate John Paul Obuya with a specific directive barring him from making statements on any media platforms given the seriousness of the offences against him.

In his ruling, Obuya noted that he had considered the submissions from his defence counsel Patrick Olet and state attorney, Roselyn Kipola on his bail application.

He noted that he agreed with the defence counsel that the offence against Jakana is bailable before his court and the accused had the right to apply for it. He rejected the objection by the state attorney that one of the sureties Yusuf Kikomeko was not substantial on the grounds that he didn’t present an introduction letter from his LC 1 chairperson yet it is available on court records.

He rejected the objection by the state to Jakana's bail application that he may interfere with the ongoing investigations, saying that the state didn't present sufficient evidence to back the allegations. He granted Jakana a cash bail of Shs 5 million and directed his sureties to execute a noncash bond of Shs 10 million each.

The sureties included Jakana's cousin, Yusuf Kikomeko, and brother, Omar Badru Kabugo. He explained that he had considered Jakana's bail application on grounds of poor health to enable him to access better treatment outside the jail.

He bared him from making any statements on any platforms given the seriousness of the offense until the matter is disposed of. He adjourned the case to November 16 for further mention since the state said investigations were ongoing.

Jakana's father, Abdul Nadduli who was present in the court jumped into his vehicle together with the defense lawyer shortly after adjournment to deposit the bail money. Hassan Kirumira, the Katikamu South MP welcomed Jakana's release but criticized the court over what he called the exploitation of accused persons.

But Frank Gashumba, the chairperson of the Council for Abavindimwe told URN that they were happy with Jakana's bail terms. Gashumba, who was accompanied by scores of aggrieved Bavindimwe, said that he is among the people who filed complaints against Jakana and he is ready to testify against him in court for repeatedly promoting sectarianism against their tribe.

According to the charge sheet, on April 5, 2022 while in Luwero, Jakana, 37, a resident of Nakasero zone in Wobulenzi town recorded and uploaded a video on youtube, which promotes sectarianism against Banyankole and Banyarwanda contrary to section 41(1) of the penal code act. Jakana pleaded not guilty to the offense.

Banyarwanda is name of a people who speak Kinyarwanda, regardless of which geographical/political boundaries they fall in! When we say Masai, Arur, Bakonzo, Bagisu, Acholi, do you realize that they are found in more than one country?

When do you decide that they are not Ugandan? It is that standard that should applied to Banyarwanda. Respect man! There is need for a respectful discussion to clear some people of their bigoted-shenzi-ignorant disrespect for Banyarwanda as a people! Every ethnic group on this planet is God's creation and should be respected, individual should be held to account as individuals.
Quote | Report to administrator
0 #12 Joe 2022-09-23 16:50
Quoting sula:

1- Joe, surely no one has called for the repatriation of Rwandese ........overthrow a sitting government declare themselves OWNERS of Uganda, arrogantly, insensitively, kill, torture, loot , and demand not to be questioned.

2- Uganda was captured - All young Ugandans want is ...... they want the whole Country. The war of words will not end until the Ugandans get their country back.

3- The arrogance and stupid behaviour will only evolve to something similar to what their grandparents experienced and which led them to Uganda.

SULA, who are these Banyarwanda that are doing those horrible things you talk about?

Shame them! The real "MacCoy" Banyarwanda are not ashamed of being called Banyarwanda!

They will proudly declare that when applying fo National ID and passports no matter the persecution. And surely young man, I have not written anything about repatriation anywhere. Respect.
Quote | Report to administrator
0 #13 kambarage 2022-09-29 17:30
Quoting sula:

1- Joe,They have a right to stay in Uganda BUT they have no right to get guns overthrow a sitting government declare themselves OWNERS of Uganda
2- Uganda was captured - All young Ugandans want is there country. The war of words will not end until the Ugandans get their country back.
3- The arrogance and stupid behaviour will only evolve to something similar to what their grandparents experienced and which led them to Uganda.

There is no law that bars Ugandan Banyarwanda from claiming their rights including overthrowing bad leadership, returning Kabaka from exile and being Presidents!

One of the Kings of Buganda named Kimera was a Munyoro and he ruled over the Baganda because of how he presented himself and he was loved regardless.

Migration is part of African co-existence. Who is Ugandan and who is not does not arise among people socialized in the same space.
Quote | Report to administrator
12
Refresh comments list
RSS feed for comments to this post
Add comment