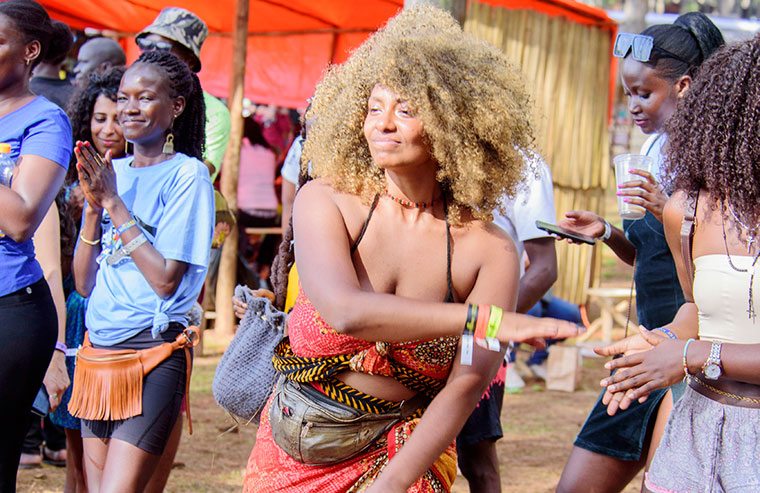 It was muddy and thrilling in the end. But at the start, it was drenched in controversy. Here’s a look at the controversial Nyege Nyege festival that just finished in Jinja at the weekend. Parliament wanted to stop it.

An unsuccessful parliamentary resolution seeking to stop it described the event as immoral. One Ugandan, who describes himself as Uncle AB, has shared a first-hand experience on a WhatsApp group. He was there at Itanda falls. He saw it all.

Below is a slightly edited version.

My family and friends are still in shock that I attended Nyege Nyege festival in Jinja at the weekend. One called and said she had been praying for me throughout the weekend – thanks for your prayers, my dear. I am back in Kampala in one piace.

WHY I DECIDED TO ATTEND

Following the “bad” stories and the whole hullaballoo about Nyege Nyege by a section of Ugandans, I secured a ticket at Talent Africa offices and decided to attend this year’s festival. I am not a fan of listening to “moralists” who base their views on hearsay and social media.

I needed to get facts first-hand. I promised my friends that I would share my genuine views about the festival. I am not a writer, but let me give this a try.

Time check –10 am, Friday, September 16, my friends and I set off for Jinja via Kayunga road. In Jinja town, we booked into our respective hotels, changed into more comfy wear, and hit the 27km journey to Itanda falls. As we set off, I had mixed thoughts – what if the road is impassable, what if the venue is so small and congested, and what if the place is indeed “satanic”; what if, what if...!!

What shocked me was that the 27km murram road that had been declared impassable a day before was now clear. For some sections, I could cruise at 70km per hour. Ahead of me were all types of small cars from Vitz, etc. There was no way any vehicle, however small, would fail to access the venue.

GRAND ARRIVAL AT THE VENUE

About one kilometer to the venue, we were greeted by hundreds of locals who had turned their compounds and farmlands into car parking spaces. As we moved on, we bumped into a roadblock set up by Jinja District Local Government – Butagaya Sub-County.

A vehicle user fee of Shs 10,000 was being charged per vehicle (my receipt number was 505). Talk about grabbing
an opportunity, Butagaya Sub- county must have made a real kill considering the number of vehicles that accessed the venue.

I drove further ahead and accessed the “official parking” of Nyege Nyege...here I negotiated and paid Shs 20,000 for secure parking for the two days I was going to be in attendance.

With my crew, we walked through the security check and proceeded to the main entrance. We handed over our payment receipts and wow.. wow, we were inside the Nyege Nyege venue – time check, 3:10 pm.

For obvious reasons, my thoughts were calm. First things first, I scanned the area to ascertain the level of security around this massive venue covering acres and acres of pine trees. I noticed that the entire area was fenced off with a chain link.

The only gate used to access the venue was the same entrance gate we used. A big plus for the organizers. Having ascertained we were secure, my roaming eyes turned to the dress code. The uncle in me was a little bit “disappointed” with the dress code.

Most ladies were dressed in normal tight jeans, patras, and mini-skirts just like they do in Kampala daily (visit any show at Cricket oval). But I recalled that the government had issued seven guidelines and number two was “nudity is prohibited at the festival”.

Now, with seven stages all blasting music, we didn’t know where to start. But I was on a mission to get facts. So, we started from The Dark Star stage, and moved on to the Smirnoff stage, EDM stage, Itanda stage, The Tropical stage, Bell stage (at the bank of the river), Events main stage, and ended up at the Uganda Waragi stage.

BOTHERED ABOUT THE SECURITY OF REVELERS AT NIGHT

The night set in. BUT lights were all over the place, you could identify your friend metres away. At around 10 pm, I approached police and military personnel to get their feelings about security. I was carrying what looked like a security walkie-talkie; so, I really had a serious chat with these guys.

It was like they were briefing me on what was going on. Following the chat, I was convinced that the joint security agencies were well prepared and fully equipped to secure the festival.

Now I start to get a feel of why the so-called Ugandan “moralists” wanted the festival banned. The word Nyege Nyege is coined from the Luganda word “ekinyegenyege” meaning “irresistible urge to dance.” Even among the Batooro, there is
a dance called “Orunyege dance.”

Even in our different cultures, some words that have innocent meanings among Basoga or Bagisu cannot be said among Banyankore!!. From an uncle’s view, this mistaken belief about Nyege Nyege moreover from people who haven’t attended any of the festivals is what is “immoral.”

You can’t judge something based on hearsay and social media rumours. But a day after the festival, Ugandans are still searching on social media for something bad to jump on. In fact following “Captain Alex’s” panga stunt last Sunday, several “moralists” started calling me asking whether I was safe.

But why are Ugandans so hypocritical? Aren’t these the same Ugandans flooding beaches in Entebbe that are making noise? Have these moral Ugandans seen what happens at other festivals and shows held in Kampala?

Nyege Nyege revelers are adults of sound minds who are responsible for their lives. With the seven guidelines set up by the government and with the security apparatus at hand, all was going on well so far.

Having enjoyed the festival for a full two days, I can comfortably say the event was timely especially for the tourism and hospitality sector as we recover from the Covid-19 pandemic.

From the Local Government that earned revenue from vehicle user fees (accountability issues aside), I could identify close to 20 businesses that made money as follows:

In fact Ugandans made so much money. A bank set up a branch at the venue. I saw a bullion van pick up cash to deliver to Jinja. With my finance and tax background, I talked to an accountant of a hotel I stayed in, in Jinja. She said the revenue the hotel earned in a week will partly be used to clear tax arrears.

See, URA will collect more revenue in the next few days, more revenue means public servants will be paid. Now I can understand why our beloved Prime Minister [Robinah Nabbanja] together with Information Minister Chris Baryomunsi cleared the festival.

Government has to raise money to pay public servants including MPs. A boda boda guy I talked to said he is happy that he can now clear school fees for his four kids. He had only managed to pay a small deposit at the school earlier. A local lady I talked to outside the event said it was the first time she earned Shs 2 million in a day.

THE BAD – ACCOMMODATION AT THE VENUE

Although I was personally staying in Jinja town in my comfy white bed sheets (having had to drive late in the night), I walked around the accommodation side to get a feel of what it looked like.

I also talked to a friend who had camped at the venue and their experience was horrible. For example, where the organizers had promised quality cottages, revellers were shocked to find cardboards without proper sanitary facilities. Going forward, this is one area the organizers have to sort out.

All said and done, it is my considered opinion that the festival was a huge success. Nyege Nyege ended with huge positives. Among the seven guidelines issued by the government was that “In case of any serious breaches, UPF shall stop the festival and order everyone to vacate the venue.”

Considering that UPF did not stop the festival and based on my account, I am convinced that security agencies and officers from the Ethics ministry were satisfied with both the organizers and the revelers conduct.

Government should look for a way to support this festival from a logistical point of view.

The writer is clearly a mercenary, paid to provide a report card with good comments and marks for what transpired during the festival.

Kindly gives us your version, then we compare.
Report to administrator
+3 #3 Angelo Matthews 2022-09-21 19:44
The writer to me was unbiased and that was my expectation. These kind of events are economic stimulatingl events and should be promoted that way!

This is very good for the Busoga area which has just one such event and more such evets should be developed for the area to stimulate more cash for the locals
Report to administrator
0 #4 Ebmok 2022-09-21 22:43
Busoga has powerful MP's, powerful ministers in our government, parliament speakers, vice presidents, prime ministers (deputies), chief justices, best bridges, Uganda's most reliable hydro-electric power source for decades, powerful schools, powerful businessmen & women, Uganda's maize corn basket, etc etc ... AND STILL NOT ENOUGH TO MOVE BUSOGA ONE INCH?

Our culture shuns that kind of behaviour. Like Prsotitution, it disgraces society. Anyone claiming to be a Musoga and saying otherwise needs to examine their true origins.
Report to administrator
0 #6 rubangakene 2022-09-22 19:13
Well, well, well! Morals out of the way, dollars in, would you say Uncle AB?

I can see other regions are thinking of organizing similar dos; 'Kachaps Galore' Festival in Western Uganda, 'Lakwelo-Okato' in the North, Apre' Akiipii in Teso and Duluka in West Nile. Welcome to the cruise to hell!
Report to administrator