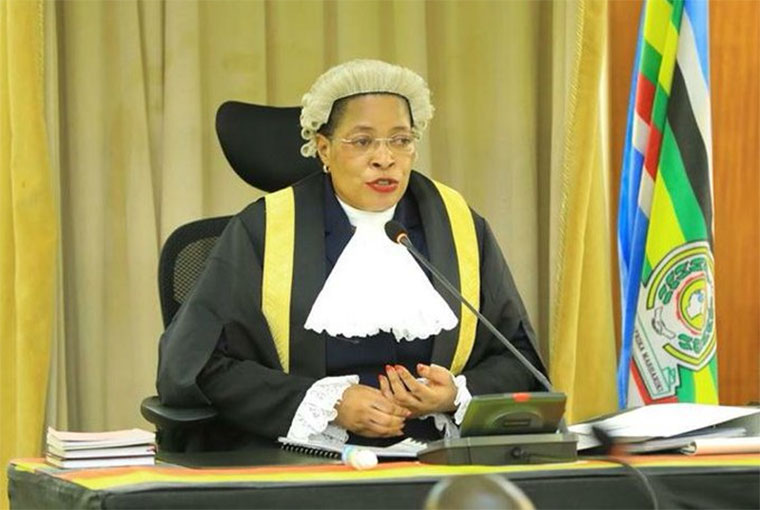 On August 30, 2022, the Parliament of Uganda chaired by Speaker Anita Among hurriedly passed seven bills with little opposition.

The laws are meant to strengthen the legal and regulatory framework for cases of money laundering and terrorism financing in Uganda. The Mutual Evaluation Report on Uganda recommended several measures to strengthen the Anti-money laundering and anti-terrorism financing legal framework. It is after their implementation that Uganda would be considered compliant with the regulations of the Financial Action Task Force ( FATF).

The task force’s major purpose is to establish international standards, and to develop and promote policies, both at national and international levels, to combat money laundering and the financing of terrorism.

Rising on a procedural issue, Ibrahim Ssemujju Nganda, the Member of Parliament for Kiira Municipality, asked why the laws were hurriedly being passed. Ssemujju warned that parliament risked being sued for flouting parliamentary rules of procedure.

Speaker Anita Among shot back, “Thank you so much honourable. It is good that you didn’t have any area of dissent. You only had procedural issues that you are raising. When you look at the issue of the number of days, rule 129 of the parliamentary rules of procedure stipulates 45 days (within which laws can be passed).

You can even do it within one hour. I passed the Administration of Parliament Act here in 15 minutes without a report. It was passed and it is now operational. I am also aware that the public was invited. When you look at page 4 of the main report, the stakeholders were invited.”

“Most importantly, courts are there to serve us. If you feel like going to court, we should give court work. If we don’t give court work, what will they do? I am asking any of you who feel dissatisfied with whatever is happening to go to courts. Chief Justice Owiny Dollo is there. He will receive you and handle you effectively.”

The bills were subsequently assented to by the president. In his September 8, 2022 letter, the Clerk to Parliament Adolf Mwesige shared a copy of each of the assented bills with the chief justice. The letter was copied to the minister for justice and constitutional affairs and the first Parliament Counsel.

This will allow the incorporation of trusts for any lawful purpose, thereby allowing the benefits of appointing trustees to be enjoyed in all lawful actions in Uganda. Under the new act, the trustees shall be required to send copies of their beneficial owners. Anyone found contravening the law shall pay a daily fine of Shs 100,000.

In the new Act, an individual or organization that provides funds, financial services, or brokerage used for the manufacture, acquisition, possession, development, export, trans-shipment, brokering, transport, transfer, stockpiling, or use of nuclear, chemical, or biological weapons shall be jailed for 20 years or be forced to pay Shs 10 billion or both.

Andrew Wandera, a corporate and commercial lawyer with Ortus Advocates (a law firm in Kampala), said the new laws would make Uganda a safe environment for investment. “Since May, Uganda has been under the gray list of the Financial Action Task Force (FATF).

This meant that the country was suspected to be a country that harbours money laundering and a haven for money attained from crime. Keeping on the gray list of the FATF keeps away potential investors. This partly explains why these laws were handled urgently”.

“Under these newly enacted laws, shareholders in companies will have to be disclosed. This shall ensure that the registrar of companies, the Financial Intelligence Authority, and other concerned parties can trace and investigate the sources of the company’s funds easily. Since the excise duty has been amended, Uganda Revenue Authority shall also be able to monitor these companies most especially their tax remittances.”

Responding to fears that Uganda would be serving foreign interests, Wandera added, “As long as our economy continues to rely on foreign capital, foreign players might have a place in decision making. A bigger percentage of the capital injected
into our economy comes from foreign markets.

To ensure that investors have confidence in your market (Uganda) and also that the economy is shielded from any inflation accrued from proceeds of crime and corruption that cannot be accounted for, these laws were desirable. It is important to make the economy attractive to investors by enacting a legal framework that ensures that beneficial owners of the company are disclosed. These shall be able to account for the source of their money. You can no longer exist in this world in isolation from the rest. The notion of being a global economy is crucial.”

Brighten Abaho, a policy analyst with the Center for Policy Analysis, worries that the new laws may be used to gag or target the activities of non-governmental and civil society organizations in Uganda.

“If you look at both the Anti-Terrorism Act and the Companies Act of 2022, the activities of NGOs shall be threatened. Although the Attorney General has argued that the hefty fines are deterrents from committing the crime, the same fines and penalties shall be used to silence NGOs. The government is aware that NGOs are registered as companies. NGOs and opposition political figures should brace themselves for a tough time ahead.”

In December 2020, Nicholas Opiyo, a human rights lawyer and head of an NGO, Chapter Four Uganda was arrested and charged with money laundering. His charge sheet read in part, “Opiyo had on October 8, 2020, at Absa bank Garden City branch in Kampala district, acquired $340,000 through Absa account number 60040780445 in the names of Chapter Four Uganda knowing at the time that said funds were proceeds of crime.”

In the same period, the government froze the accounts of the National NGO Forum, a membership organization with over 650 organizations, and Uganda Women’s Network (UWONET), an entity that brings together 20 Women’s Rights Organizations and nine individual activists. They were accused of money laundering and funding terrorism activities in the country.

0 #1 Ebmok 2022-09-21 23:04
Does this open the gates for Ugandans to access e.g. online paying jobs abroad where they were unable to access funds transfer due to the grey? In some examples of this regard, it's a welcome thing.

But it also needs to strike a balance between passing these bills vs operationalization & professional development.
Quote | Report to administrator
Refresh comments list
RSS feed for comments to this post
Add comment