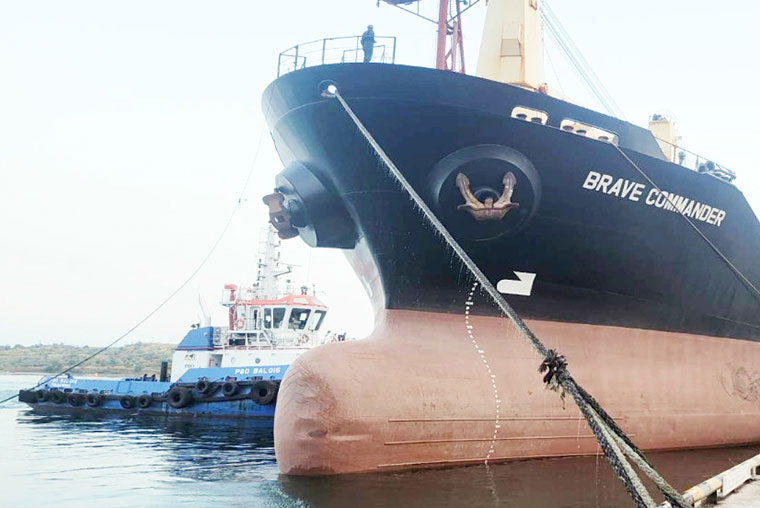 The Ukraine grain ship in Djibouti

Recently, the BBC put up a tweet which carried a story about how “a ship carrying Ukrainian grain had docked in Djibouti, which, according to the BBC, was the first grain shipment from Ukraine to Africa since the Russian invasion.”

Someone subsequently retweeted with a comment wondering “how a nation at war is able to feed African nations at peace, whose excuse for not progressing is the same war in the country that’s feeding them.”

The reasons behind sub-Saharan Africa (SSA)’s low food production could be more complex than it appears. There seem to be both internal and external factors that hinder agricultural prosperity in this fertile continent. To start with internal problems, policies to promote local production and support farmers appear to be ineffective in many African countries.

It begins with governments’ economic efforts to back agricultural sectors up; until recently, very few SSA countries have dedicated at least 10% of their annual budget to agricultural development.

Along with budget allocation, policies designed to promote local production and support farmers are minimal and inefficient; of course, these include tariffs placed on foreign products, but it, first of all, looks at how local producers could be promoted to compete in the foreign market successfully.

By doing so, exports will be boosted, and competitive advantage in local markets is clearly ensured. In addition, international policies are big constraints to food independence in Africa. Most SSA states have adhered to international organisations; policies designed by these organisations seem to have been tailored to suit the need of certain countries.

Consequently, one of the biggest reasons is the geopolitics of free trade. In recent times, agricultural production in sub-Saharan Africa has remained lower than in the rest of the world. (Vibeke Bjornlunda School of Commerce, University of South Australia, Adelaide)

Many academics attribute Africa’s low food production to factors inherent to Africa and its people, such as climate, soil quality, slavery and disease. This isn’t true. 70 per cent of the world’s arable land is in Africa.

Secondly, the continent now has a youth bulge that can till these arable lands. But where is the problem? The problem lies in the geopolitics of reckless free trade economies of greed favoured by advanced economies.

Sub-Saharan Africa (SSA) had modest agricultural production per capita growth from the early 1960s to the 1970s and occasional short periods of growth in the mid-1970s and 1980s. However, the overall trend is one of decline, which contrasts with other developing regions. Consequently, food security has been an ongoing problem, with 30% of SSA’s population being food-insecure. A case in point is Ghana’s tomato growing industry.

After independence, Ghana put high import Customs duties in place to protect its farmers, specifically the infant tomato growing sector. However, Ghana and many African countries came under increasing pressure to remove these tariffs.

Thirty years later, Chinese, Italian, Spanish and American tomatoes have flooded the Ghanaian market, outcompeting local Ghanaian farmers who have been pushed out of business. As a result, there is no tomato processing industry in Ghana.

The 40% import tariffs on imported agricultural produce were removed thanks to the geopolitics of trade rules. Industrial farming, subsidies, and wage dumping due to cheap African labour that has fled Africa to work on tomato-growing farms in Europe have resulted in surplus production.

This has resulted in the surplus tomato production that has flooded the markets in Ghana, outcompeting local farmers. The locally produced tomatoes end up being more expensive than imported tomatoes.

These deceitful “free trade” tendencies promoted by the World Trade Organisation will certainly never allow Africans to thrive on homegrown local produce. This will continue to explain why Ukraine will continue dumping cheaper grain on the continent.

World Trade Organisation rules and the geopolitics just won’t allow Africans to be food-independent. A few years ago, Rwanda put a ban on second-hand clothes from majorly the USA. The USA responded by kicking Rwanda out of AGOA.

African agriculture is under increasing pressure from Western agricultural products. In 2018 alone, the EU exported tomato products worth 23 million euros, milk powder worth 258 million euros and meat worth 411 million euros to West Africa.

Many African poultry farmers are giving up. They just can’t compete with EU imported agricultural products. The EU heavily subsidises its farmers to even do farming both in the EU and abroad. In the early 1990s, Ghana would produce 90% of its poultry needs. But right now, they only produce 5%, and most poultry products come from the EU.

Once African countries attempt to put tariffs on EU poultry products to promote local agricultural self-sustenance, they will be punished, just like Rwanda when it attempted to ban second-hand clothes.

In this world with many super-economies, it is safe to assert that a nation’s economic growth is challenging on its own. Food production is a crucial sector in a country’s combat for independence; Africa is a perfect case study for that.

With failures in internal policies and hindrances from international organisations, studies must be conducted to determine methods to filter the inflows of foreign products while promoting competitive advantage in global markets.

The first area to start with would be governments planning to facilitate local production; this involves increased budget for agriculture, promoting agricultural professionalism through education and building infrastructures (machineries, roads, dams etc.).

Furthermore, design policies to protect local farmers and foster exports to international markets. The adoption of this chain of approaches could be the stepping stone for food independence on the continent.

If Africans aren’t careful, the African free continental trade area treaty will just worsen this. It will be an easy vehicle for re-exporting foreign agricultural produce between African countries without dealing with separate customs duties of individual states.

By 2050, the world population will be nine billion people, which means that food production will have to grow by 70% to feed these people. In Africa alone, food production must double by 2050. However, if the current geopolitics of free trade stop Africans from feeding their own people, a time bomb awaits this continent. This will translate into lost job opportunities and increased frustration, leading to more political instability.

If anything, the EU will continue to subsidise its farmers to till the arable land in Africa since our governments aren’t doing the same for African farmers. The results will be catastrophic, and countries like Ukraine will keep exporting grain to African counties with vast hectares of arable land because of selfish free trade geopolitics favouring Western counties.

And the airplanes that keep taking Africans to the Middle East for casual labour will have an increasing number of people to transport out of a continent that lacks opportunities.

The author is an agricultural scientist and environmental activist