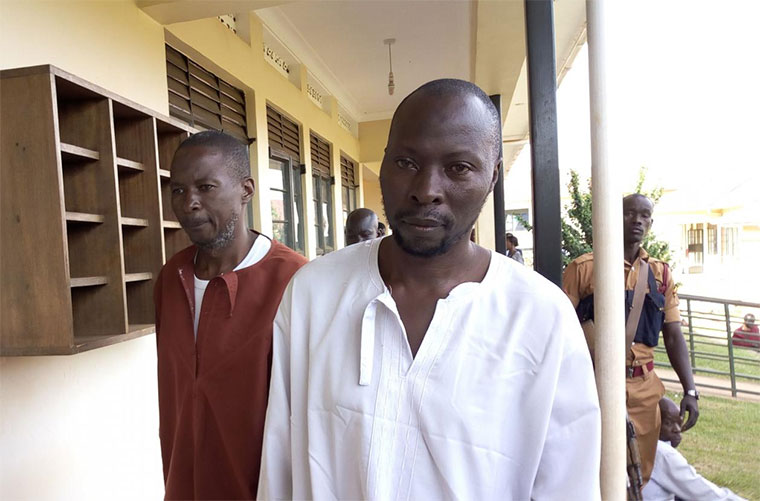 Hamuza Mwebe and Abubaker Kalungi, the key suspects in the murder of Muhammad Kirumira

Unknown assailants riding on a motorcycle gunned down the duo in Bulenga town along Mityana road on September 8, 2018. The two were seated in a vehicle when the assailants spread them with a volley of bullets. Police swung into action and picked up Abubaker Karungi and Hamza Mwebe, both suspected members of the rebel Allied Democratic Forces (ADF). The suspects appeared before the Wakiso grade one magistrate for murder and were committed to the High court in March 2019.

However, the trial never kicked off until September 20, 2022, before justice Margaret Mutonyi. The prosecution led by assistant director of public prosecutions Thomas Jatiko presented six witnesses who pinned the accused persons.

The witnesses included police officers, pathologists, eyewitnesses, and Suleiman Kyabaggu, the Local Council 1 chairperson of Kyasanku village in Mpigi district. The first prosecution witness was Abdul Kigongo, a driver from Bulenga, who told the court that on the day the two were killed, he had just passed by and greeted Kirumira and Mbabazi at about 8 pm.

He said that he later saw four men riding on two sports motorbikes who started shooting at the car that was being driven by Kirumira. Kigongo told the court that some of the assailants shot in the air to disperse gathering crowds while others were rotating around Kirumira's car showering it with bullets. When asked if he identified the shooters, Kigongo replied in the negative, saying that it was impossible for him to identify the assailants because they were wearing hoods.

Detective superintendent of police, Pamela Ajilong, currently the Bukedi North regional CID official who was at the time of the murder attached to Katonga Regional police headquarters as regional CID Officer was the second to take the stand.

She told the court that on October 3, 2018, the then CID director Grace Akullo instructed her to visit the home of Karungi's mother in Kyasanku in Mpigi district and conduct a search and record statements. She explained that she went with a team of police officers and Capt Okumu from the Chieftaincy of Military Intelligence (CMI) who came with Karungi.

According to Ajilong, when they arrived at the home, Karungi’s mother, Namusoke Ndagire inquired why her son was in handcuffs. She explained that Karungi told his mother that his friends Hamuza and Abdulrahman Kateregga had lured him to act as an informant. According to the witness, the two explained to Karungi that his mission was to look out for Kirumira's car and they took him to Bulenga to be on the lookout.

She explained that on September 8, 2018, when Karungi spotted Kirumira's vehicle, he called his friends who came and shot the occupants. Court heard that the group, later on, disagreed over money because Karungi didn't get what he was promised. He reportedly returned home and told his mother that his friends might have gotten him into trouble.

According to Ajilong, they recorded the statements of Karungi and his mother but from the search, they recovered nothing of value. The prosecution tendered exhibits such as the postmortem reports of Kirumira and Nalinya, in which police pathologists Dr Moses Byaruhanga and Dr William Mutumba confirmed that the duo died of gunshot wounds.

Trouble for Karungi and Mwebe started when police trailed their movements and tracked their communication between Mpigi, Gulu, and Namungoona through mobile phones. Another would-be suspect, Kateregga was reportedly shot dead by operatives from -CMI and Joint Anti-Terrorism Task Force (JATT) at his wife's shop at Ku buying, Namungoona, a Kampala suburb on October 5, 2018.

The following day President Yoweri Museveni praised the operatives for the raid and shooting of Kateregga, a beneficiary of Amnesty in 2001 after he confessed to having been part of ADF and participated in the 2000 Kampala bombings. The case will resume on September 22 for further hearing.