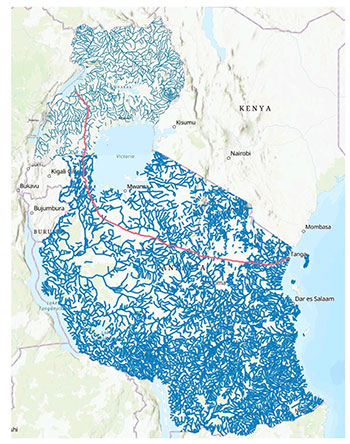 European Union (EU) MPs opposed to the East African Crude Oil Pipeline (EACOP) will be invited for a fact-finding tour so they can argue from a point of knowledge, the Uganda National Oil Company (UNOC) has said.

The EU parliamentarians threw a spanner in the works when they called on Uganda and Tanzania and the oil investing companies to halt the development of the EACOP project for at least a year so as to find an alternative route with less damage to the environment. Uganda President Yoweri Museveni in response vowed that if the project investors; TotalEnergies E&P and CNOOC opt to listen to the EU MPs and pull out of the project, Uganda will find a new investor and Uganda's oil be out of the ground by 2025.

The EU parliament was convinced by members of the Green Party, that the current route from western Uganda to the Tanzanian coastal town of Tanga, “goes through 16 protected areas and will kill hippos,” and that the pipeline will affect the “230 rivers which serve 44 million Ugandans.”

Now, Peter Muliisa, the head of legal and corporate affairs at UNOC said the EU parliament’s resolutions have no effect on EACOP because no point single problem raised in the EU parliament held substance.

"We also have things to ask them. Who are these PAPs [project-affected persons] that they say have not had justice when we have a justice system that works? We want to know who these people are such that we can also attend to them if they actually exist. But more interesting, we would want to know about those 230 rivers. The nearest point from Lake Victoria to the pipeline is 25km, and so we want to see which water sources we're affecting.  And who are these 44 million people whose water sources are affected? The reality is that pipelines can go through lakes, it can go through seas and that has been done, but ours is not going through Lake Victoria. If we had decided to take it through Lake victoria it would have been absolutely feasible and we would have done it right but we didn't. So we don't want anybody to create facts that are not correct that is why we want to have an engagement with the concerned MPs that are largely green MPs," said Muliisa.

Muliisa added that it would be unthinkable that the project can be abandoned or halted when almost $4 billion (Shs 15 trillion) has already been spent. He says the projects underwent environmental and social impact assessments and several independent analyses to ensure they are implemented according to international standards, which they actually surpassed.

"The process, especially for EACOP, has been audited by third-party independent experts of the financing entities and they found that we did everything according to the book and even better. So it is so unthinkable for us a country to say 4 MPs took a trip to Uganda, walked around, and talked to a few people, we could not even validate project affected persons and sponsor the resolution to stop a project on which we have spent close to $4m, for which many of our businesses are recovering from Covid by getting contracts, on which our tax planning is structured. On which our hands for the future is structured. It is simply unthinkable and we can't even think about it," said Muliisa.

Dickens Kamugisha, the chief executive of the Africa Institute for Energy Governance (AFIEGO), says it is high time the two governments went for talks with the EU and other development partners to ensure the industry is developed smoothly. Kamugisha says that when it comes to compensation, the problem is that PAPs are being undervalued but that they have no way of rejecting the money because they are poor and vulnerable.

He says the project must undergo multiple levels of scrutiny in line with international standards, providing for the protection of wildlife and other natural resources. Dozith Abeinomugisha, a commissioner in the petroleum directorate explains that the most modern technology has been applied in the industry and the same is being done for the pipeline, including burying the 1,444-kilometre heated pipeline. Insulating the pipeline means that after construction works, human activity like cultivating can still take place on the ground.

The pipeline will not be powered by diesel, but hydro and solar electricity systems, which are aimed at ensuring minimal amounts of emissions. On top of the thick walls of the insulated pipeline, it will have a shock detection mechanism that will warn against possible damage such as excavation works. Nj Ayuk, the chairman of the Africa Energy Chamber says he has visited Uganda and toured the oil and gas facilities several times, commending the efforts to protect the environment and the population. He says it is unfair for anyone to say that Uganda has not done enough, considering how the processes have been.

Ayuk, also the CEO at Centurion Law Group says the petroleum industry worldwide cherishes the environment more than most sectors.

Of the total length, 20 per cent of the 4-billion-dollar pipeline project is in Uganda, while the rest will be in Tanzania. “At the end of the compensation project, some 13,161 Project Affected Persons (PAPs) along the pipeline route will have received compensation in cash and in kind directly from EACOP, in line with both National Legislation and the IFC Performance Standards,” says a statement by EACOP.

It says that 96 per cent of the PAPs have some portion of their land impacted and will receive compensation for the full replacement cost of their land, structures, crops and trees, while 4 per cent also require their primary dwelling to be relocated.

"There is absolutely no reason to stop. We listened to the debate, read the resolution and they don't raise anything of substance that should concern us as government, project developers to take another look. We did conduct front-end engineering and designing for each of the fields, we did value engineering, we're using the latest technology available in the world to develop these fields. We did environmental impact assessment. We have resettled our people with one objective in mind to make sure that their lives are much better than they were before their interaction with the project. We have hundreds of testimonies to that effect. We do not have any dispute on resettlement for EACOP. We have two or three people who still have an issue with evaluation that meant 99% acceptance." added Muliisa.

The compensation process was started in 2021 and full land access is planned to be achieved in 2023, according to UNOC. These are some of the reasons that the government and oil companies point at, saying that changing the route as demanded by the EU parliament, will cause big losses for both the country and the investors. Ajuk says that if the western governments and the civil society block the financial institutions there from funding the African oil industry, they will instead be creating a market for China because the Asian countries need the resources and are ready to finance their development.

"Right now when the western countries say we're not going to finance petroleum projects, it leads Uganda, Africa to one [country] only - China. China needs the resources, it is going to finance, India needs it is going to finance it. We have all had our own experience how China has proceeded with investment projects in Africa and so it is time for top negotiations. It is also time for us to think outside the box and work with other players and different kind of things that really work. We need to have an African voice that comes out and says we're going to develop this as well." Ayuk said.

For the Tilenga and Kingfisher where drilling is set to commence in December, all PAPs have been compensated and resettled, save for eight in the Kingfisher area which they say have not been traced to date. Muliisa says it is therefore unfair for anyone to say the people are being displaced without being duly compensated. He says the government and the oil and gas companies are waiting for the official communication from the EU parliament about the resolution before taking the next step.

+1 #1 Ebmok 2022-09-21 23:16
Interesting that for example Canada has that Keystone XL Oil Pipeline that runs all the way from Alberta to Texas USA and has brought in much criticism / demonstration from Canadians and I have never heard a single EU shout for it.

Is it because these countries have key resources like these under their national security?
Uganda has literally flipped itself open to these "development partners" and after doing everything to the dot and committing exorbitant sums by any country's standards, some misinformed boys arrogantly rubber-stamp a choking resolution on poor country trying to break the ranks! Isn't this bullying surely?
Report to administrator