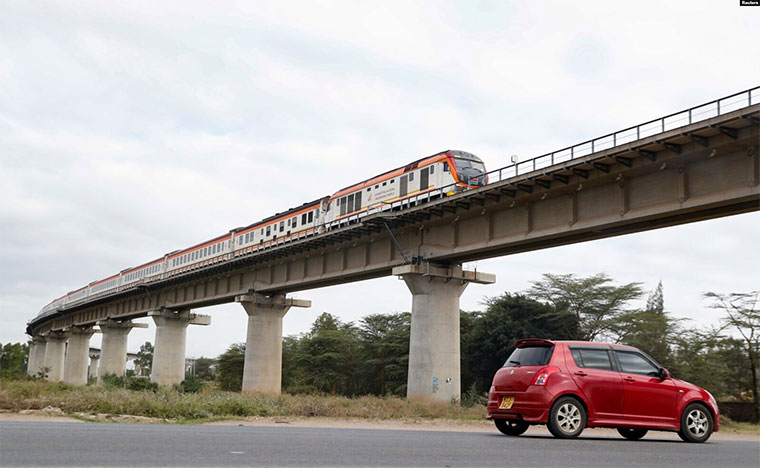 A car passes underneath the SGR bridge

In one of his first acts in office, Kenya’s new president, William Ruto, ordered cargo containers from incoming ships to be emptied at the port of Mombasa instead of in the capital, Nairobi.

Ruto said he is carrying out a campaign promise, though there are concerns the move could overwhelm facilities at the Mombasa port. In 2019, the Kenyan government shifted cargo clearance operations from Kenya’s Indian Ocean port of Mombasa to the inland cities of Nairobi and Naivasha. This week, Ruto directed that the operations be returned to Mombasa.

“I will be issuing instructions for clearing of goods and other attended operational issues to revert to the port of Mombasa as I made a commitment to Kenyans,” Ruto said. “This will restore thousands of jobs in the city of Mombasa.”

Former President Uhuru Kenyatta had moved cargo clearance to Nairobi to increase use of the Standard Gauge Railway (SGR), which was built with a $4.5 billion loan from China. The move forced companies to pay transport fees to use the railway — a decision Kenyan officials saw as the best way to repay the loan. Ruto’s decision, announced last week on Tuesday, is welcomed by newly-elected Mombasa governor Abdulswamad Shariff Nassir, who said the need to repay the debt is not reason to kill business at his city’s port.

“We have been fighting for it for a long time and we said openly, even if it was to repay the SGR debt, there are other ways to repay it. It’s not a must to kill the economy of one part of the country.”

With cargo clearance operations shifting back to Mombasa, many people are concerned that the railway will lose business to trucking companies, making it difficult for the railway to pay its debt, and ultimately shifting the cost of its construction to taxpayers. Some traders argued that historically the Mombasa port has been slow to unload and transport cargo containers.

Gerrishon Ikiara, an economics teacher at the University of Nairobi, predicts the Mombasa port will not be able to handle the increased responsibilities.

“Very shortly, we will start getting the impact of the delayed cargo and other inconveniences, overcrowding of Mombasa highway and corruption in the police office at every point.”

Governance and urban development expert Alfred Omenya is hopeful the problems can be overcome if the government appoints good managers to run the port.

"I think the president did the right thing,” he said. “We hope that it’s not an ad hoc political action, but it will be an action that will be based on coherent planning, coherent strategy and coherent development of our country.”

In a worst-case scenario, congestion and corruption at the Mombasa port will make traders from neighbouring countries flock to other ports, making Kenya lose much-needed revenue for developing and servicing its debt.

+1 #1 Ebmok 2022-09-19 10:11
In a way this is great for Kenya because they realize that the welfare of their nationals comes first in contrast to becoming stooges of foreign influence.

In fact, of what interest is it for Uhuru to force a loan of that magnitude in order to kill one part of his country and force others to use a service if indeed it was not going to make sense for his fellow country-men?

You can't see a Uganda forcing UK to do this .. not even on China - the so called development partner! So why the other way round?

Meanwhile, they now have a chance of innovatively working out other ways of utilizing this rail service without choking the citizens.

So, in this regard, I commend Ruto.
Report to administrator
0 #2 Lakwena 2022-09-19 13:53
In other words, Ruto is out on revenge: to undo and humiliate Uhuru Kenyata's legacy. This is especially when Uhuru abandoned him (Ruto) and instead supported his opponent Oginga in the concluded Sept 2022 General Election.

And at his rate, Kenyans should brace themselves for the Authoritarian leadership Mode, thru: "Presidential Directive (decree)" like the one taking place in Uganda.

After all Ruto has already and favorable designated Gen Tibuhaburwa as EA Elder whose guidance should be religiously adhered to.

Otherwise Kenyans, good luck and do not live to regret your choice of Ruto full of "hassling bravado" being advised gen Tibuhaburwa, instead your own Baba, Oginga Odinga.
Report to administrator
0 #3 kabayekka 2022-09-19 15:16
Such augments do not make sense in this modern world of international trade. There are many ways to skin a cat!

During the 15th and 18th centuries Mombasa was the business city of the whole region of East, North and South of the continent of Africa.

The railway was built afterwards and all the way into the hinterland of East Africa. By now Mombasa should be one of the biggest commercial harbors on this continent as Port of Durban, South Africa is, or Port Said in Egypt.
Report to administrator
0 #4 kabayekka 2022-09-19 15:28
Best economic policy in Africa today is to leave trade marketing efficiency to take its course.

It seems that political government interference in real economic marketing only breeds total corruption.
Report to administrator
0 #5 mudimbe james 2022-09-20 01:02
kenya kwaza, kenya first. let us see...
Report to administrator
+1 #6 M!K! 2022-09-20 05:16
President Ruto is most likely wrong on this one. Saving a few thousand jobs in Mombasa should not be at the cost of economic efficiency and competitiveness of Kenya and all the other countries that use Mombasa port.

Former president Kenyatta's aim of removing heavy/bulk cargo from roads and diverting it to rail and water is the right policy.

Mombasa as both a port and a city must be ready to adapt and also transition as economic facts change. For example it has the potential of becoming the region's manufacturing hub with many more jobs and linkages.
Report to administrator
0 #7 Lakwena 2022-09-20 14:04
Quoting M!K!:

President Ruto is most likely wrong on this one. Saving a few thousand jobs in Mombasa should not be at the cost of economic efficiency and competitiveness of Kenya and all the other countries that use Mombasa port.

Former president Kenyatta's aim of removing heavy/bulk cargo from roads and diverting it to rail and water is the right policy.

M!K!, Ruto's radical change of cargo transit policy away from that of his predecessor is not because he cares about the unemployment of the people Mombasa Region.

His directive is driven by apparent conflict of interest.

In other words, the guy is a petroleum products dealer, e.g. owning multiple Fuel Stations in the region especially Uganda. Therefore restricting the bulk of cargo transportation to Railway is to undercut fuel consumption and profiteering from high prices on petroleum products; Hence his removal of fuel subside.
Report to administrator