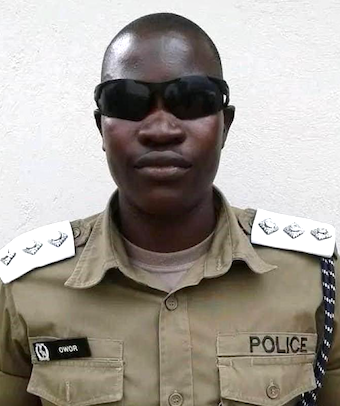 Police officer, Lamech Owor who was arrested for shooting dead a businessman in Namugongo after he knocked his vehicle, has been remanded to Luzira prison until October 6.

Owor was a traffic officer at Mukono police who was attached to Kawempe police station as an ICT officer in charge of the CCTV cameras. It is alleged that on August 13, Owor shot dead Bryan Ssebyala a resident of Nsawo Zone, Namugongo in Wakiso.

Court records indicate that on the night of August 13, Ssebyala, parked his silver grey Vista vehicle, registration number, UAK 398D, while waiting for a friend.

A few moments later, his car was knocked by the driver of a silver Premio, registration number UBE 179F, who was later established, to be ASP Owori, a resident of Kito “B” Kirinya, Wakiso district.

Police said that Owor simply drove off to his home from where he was arrested, and his impounded vehicle was found with a scratch on the front part following the impact.

In addition, a police pistol was also recovered and exhibited with only 13 rounds. One bullet was found missing and a bullet cartridge recovered from inside Owor's vehicle.

State attorney Kate Basuuta told court that investigations are almost complete and asked for 3 more weeks to enable the police to conclude its inquiries. She said that the case file shall be complete at the next court sitting for the suspect to be committed to the High court for trial.

By the time Museveni drips dead of old age, Uganda will be beyond repair & even the son waiting to replace the dad won't know how to begin!

Why have Ugandans helped, continue to help Museveni destroy them & the zone formed by their tribal lands & made them enemies of one another?

The worse is; tribal leaders hold on to their posts, unaware that after Museveni, they too, will be in trouble, lost...as non knows how to govern his tribal land & serve subjects!

What is wrong with Ugandans?
Report to administrator
+1 #5 Jose 2022-09-17 20:25
Ts the wrong perception,that once you good a gun in ur hand you are free to shoot n kill
While recruiting, why not bring in people with clearly known gomesi n origin
Report to administrator
+1 #6 Ebmok 2022-09-17 20:46
What a contrast to "serve and protect"! So, when police officials see themselves as macho-country, that's speaks volumes and perhaps that comment of "a right to kill" still rings true.

Surely, one can take a gold ring and put it in a pig's snout, but that doesn't change the thing from being what it is.

As though we're telling our children what to do when they get to run the show; they will in fact outdo their predecessors in the bad stuff.

Uganda is not to be managed by such piggy characters who have no discernment of their actions. No! We cannot allow them anywhere enjoying our gold!
Such belong to the throws in the gallows.
Report to administrator
+1 #7 Lakwena 2022-09-19 09:42
Unless ASP Owori, inherited a goldmine from his father or Grandparents before he joined the Police, or he is a Highway robber as hereabove (Gangster shade fashion); the man should not afford the "... Premio, registration number UBE 179F."

In other words, the ASP Owori, of this country must be Gen Tibuhaburwa's 5-star Hotel investors; whom he forbade Hon Beti O Kamya to Audit their Life-style.

Otherwise seeing is believing, if Kamya were to start with "Auditing the Life-style" of the Uganda Police officers, there would be not enough policemen/women to arrest themselves.
Report to administrator
+1 #8 Lakwena 2022-09-19 09:52
If the living condition of the entire personnel, especially in the Police Barracks is appalling, how can a rook ASP Owori, afford a private resident in Kito “B” Kirinya, Wakiso District?

In other words, the ASP Owori our UP must be neatly connected to the Organized Crime Ring of the celebrated Gangster Sipapa of this country.
Report to administrator