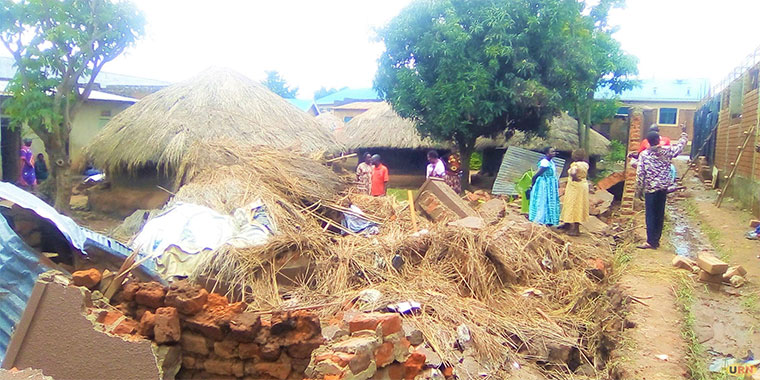 A mother and her two children have died after a school perimeter wall collapsed on their grass thatched hut in Kasubi A Central village, Gulu city.

The perimeter wall belonging to Christ the Center Ministries nursery and primary school reportedly collapsed at about 1 am Friday morning during a heavy downpour.  The dead have been identified as Mercy Anena 28, a businesswoman, and her two children; Tracy Lagum,4, and Abigail Lamaro, one and a half years old.

Margaret Arach, Anena’s mother-in-law says she woke up when the house had already been crushed by the perimeter wall. She notes that they hurriedly mobilized other neighbours to rescue the occupants but it was too late since they had all died under the rubble.

"What happened is that the wall fence collapsed on the deceased in their house, it happened at 1 am, and we woke up when it had already happened. We had initially thought it was only the house that collapsed and suggested that we intervene and dismantle the debris but one boy said it was the wall fence that collapsed. I later called other neighbours who came and started dismantling the wreckage before retrieving the mother, and her children, their father was also inside,” she said.

Arach says that Anena’s husband, Emmanuel Akena survived the incident with minor injuries on the chest and head. She however blamed the school management for failing to heed to their several complaints about the construction of the perimeter wall near her son’s grass thatched hut.

Arach is now demanding the school management foot all the burial expenses and compensate for the loss of her grandchildren and daughter-in-law.

“They will foot all the expenses from compensating lost lives, burial expenses, marrying the dead, and others. If they had heard my complaints, this would not have happened, I talked to them as a neighbour, and I told them that it wasn’t right to erect the fence without leaving a gap for flood water to pass without causing any problem, and now it has happened, let their school develop,” says Arach.

Christine Akello, a neighbour faults the school authorities for not listening to their earlier complaints about the construction of the perimeter wall. She notes that the wall was hurriedly constructed and suspects the work could have been substandard.

Patrick Oola Lumumba, the Bardege-Layibi City Division mayor says that the incident was a result of negligence by the school authorities and the site engineers who constructed the perimeter wall. Lumumba says the engineer from Crux Engineering and Construction Ltd erected the wall without a firm foundation, adding that there wasn’t also a proper drainage system provided to transport flood water out of the school.

He notes that the management of the engineering firm and the school have since owned up to their mistakes and taken the responsibility to foot the burial expenses, offering compensation for the lives lost. Andrew Opio, the Regional community liaison officer for Aswa River region says he hadn’t received detailed reports on the incident.