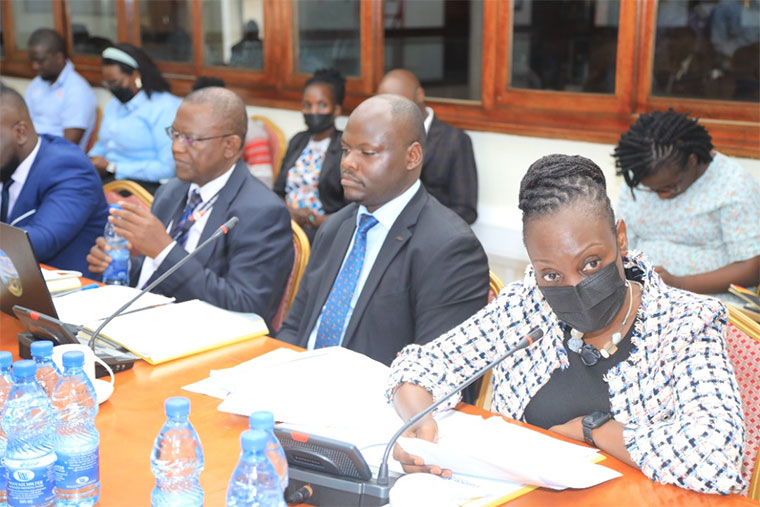 During the meeting, it emerged that chief executive officer (CEO) Jenifer Bamuturaki, without the knowledge of Uganda Airlines' secretary, Bisereko Kyomuhendo, unlawfully contracted the Independent Online Journalists Association-Uganda (INDOJA) led by Andrew Irumba, a blogger and CEO of online publication, TheSpy Uganda up to a tune of Shs 156 million to 'counter bad publicity' against the airline.

Cosase chairperson Joel Ssenyonyi produced a copy of the contract drafted by Bamuturaki and allegedly witnessed by Bisereko, the corporation secretary. However, Bisereko too expressed shock and said that he was seeing the document for the first time. Through the doctored contract, the airline's finance department on the orders of Bamuturaki, flagged Shs 117 million upfront payment.

"This is a contract you signed in December, however, you paid these people upfront Shs 117m - backdating to April. From April to December, 9 months, Shs 117m which is Shs 12m for each of those months but you signed this contract in December. Why, what happened? Talk to me about that," said Ssenyonyi.

The meeting became even more stormy when Ssenyonyi tasked Bamuturaki to respond with a 'Yes' or 'No' whether she signed the contract with Irumba (TheSpy CEO) in December 2021 but backdated it to April the same year so as to pay Shs 13 million per month. Bamuturaki said she was not prepared for such a question, arguing that the committee ought to have pre-informed her about the kind of questions they were going to ask for her to prepare responses.

"I will respond to you at a later date on how they [bloggers] came over. They came at the time when we [Uganda Airlines] were having a lot of negative publicity so they sent us a document on how they could work with us. What I would do because it was a whole process with information, I will write something and send it to you sir," said Bamuturaki.

By drafting the contract, moreover doctored, MPs also learnt, that Bamuturaki usurped the role of Shakila Rahim Lamar, the head of corporate affairs and public relations department at airlines when she assigned Regina Tibasiima, the acting commercial director to supervise the work of the bloggers.

It also emerged that Tibasiima, who has acted in the capacity for close to a year, possesses only an A'level certificate as opposed to a degree, a requisite qualification for the position she is holding. Tabasiima was later handed to the Criminal Intelligence Investigation Department (CIID) attached to the committee that accompanied her out of parliament to her office to produce reports she had been making to Bamuturaki relating to her role in monitoring activities of TheSpy.

Ssenyonyi added that it is the same INDOJA that has allegedly been trying to malign and blackmail Cosase for their probe of the airline including claims that the MPs have been bribed by the airline's competitors to fail the national carrier.

Furthermore, it emerged that Bamuturaki actually influenced the award of Shs 3.48 billion to PR firm, Abbavater Group and not Shs 2.097 billion as was earlier submitted by the airlines' officials on Wednesday.

Abbavater was recommended by Bamuturaki to offer advertising and promotions services for the revived Uganda Airlines. Bamuturaki, by her own admission, harboured vested and concealed interest in Abbavater because it belonged to her close associate and pastor, Mark Arnold Odeke, the Group’s CEO.

Without declaring a conflict of interest, Bamuturaki protested the cancellation of Abbavater's contract with Uganda Airlines after the board recommended otherwise because of her close ties with the media agency led to over-invoicing with attempts to defraud the airline.

Cosase chairperson Ssenyonyi tasked Bamuturaki to explain how she was part of a three-man committee headed by Patrick Omony Okema then the interim head of procurement and disposal unit; Joseph Ssebowa (manager human resources) of the airlines that highly appraised Abbavater Group.

Ssenyonyi pointed out that as a result of the committee’s doctored appraisal, backed by the contracts committee report, Bamuturaki used her influence to knock out rivals of Abbavater that included; Star Leo Advertising Agency, and WMC Africa Limited to market the airline but the CEO distanced herself from any responsibility.

"This is a document you gave me yesterday showing that you gave marks and you're denying that you didn't give any marks so meaning the person who did it, committed an illegality. What have you done about this?" said Ssenyonyi.

Bamuturaki however fired back, saying she has no idea how her name ended up on the evaluation report because she was not even around when the rating was being done. But Kasese Municipality MP Ferigo Kambale discredited Bamuturaki’s denial and labelled the procurement of Abbavater Group services null and void. Kambale also wondered why Bumuturaki submitted the evaluation report without a disclaimer.

"From the word go, that procurement is null and void. It has no supporting documents that are valid. So the question we table is; are you comfortable that there is a procurement document that supported such an expenditure? A  procurement that has a supporting document that is doctored, that has your name mentioned as having been part of that committee. You, as CEO what have you done to clear your name? If you have not done anything be open and say this is an oversight we must right," said Kambale.

Roland Ndyomugyenyi Bish, the Rukiga County MP called for a forensic audit on the airlines, noting that Bumuturaki and her team unlawfully shortlisted the three companies yet they were not even prequalified, thus contravening the Public Procurement and Disposal of Public Assets Act, 2003.

"The way it is now, there was fraud and forgery - forging of the documents. Number two, we can infer that although she tried to deny, in actual sense, she participated. Her participation causes dire consequences for her. Actually, as a committee at this point, this is just one there could be other procurements of this nature and therefore for me my recommendation would be to institute a forensic audit on the airline," said Ndyomugyenyi.

Meanwhile, Don Mubiri, the information and technology manager of the airlines apologized to the committee for his involvement in procuring a contractor to provide an Enterprise Resource Planning (EPR) software solution at a contract sum of $1,066,910, (about Shs 4.063 billion) - VAT exclusive.

Further, the Uganda Airlines’ IT department also concluded the provision of the Integrated Passenger Service system at a contract sum of $1,234,441 (about Shs 4.701 billion) VAT exclusive. The Auditor General red-flagged the transaction because it was not sanctioned by the government through the National Information Technology Authority-Uganda (NITA-U).

Cosase's findings and recommendations will be presented to the House for adoption on a date yet to be established.

“We feel we have got enough information to enable us to prepare our report. We shall sit as a committee and see if there is any other necessary information that we may need. But for now, we have got what is enough [from Uganda Airlines] to make our report,” said Ssenyonyi. He tasked the airline officials to present all the required documentation by the end of this week.

Conversely, Uganda Airlines is the flag carrier and the company is a revival of the older Uganda Airlines which operated from 1977 until 2001. The current carrier, with six fleets, began flying in August 2019 with 12 destinations.

In the FY 2019/2020, the airline made a loss of Shs 104 billion, and in the subsequent FY 2020/2021, the entity recorded another loss of Shs 164 billion whereas, in the FY 2021/2022 that ended on June 30, the report shows that it has made yet another record loss of Shs 234 billion. MPs now want the total disbandment of Uganda National Airlines Company Limited (UNACL) top management over fraudulent operations following an implicating Auditor's General report for FY 2020/2021.

if i ever meet someone called bamuturaki, i will flee the scum, i will remember the un-educated buzzard who fleeced ugandans of billions.. all the while keeping a straight nasty face
Report to administrator
+3 #3 Lakwena 2022-09-16 15:32
In other words, the Jenifer Bamuturaki of this country represent the concealed ugly face and sticky long hook or crooks fingers of the Appointing Authority, Gen Tibuhaburwa.

Otherwise, if she is/was not face-saving somebody big; what was so difficult about Bamuturaki answering YES or NO from Hon Ssenyonyi.

Wachireba abashuma aryaha?
Report to administrator
+4 #4 Henry Baisi 2022-09-16 15:37
Fraud is a criminal matter. Parliament should refer it to the Police.

As for the losses, be prepared. The Airline will bleed money for the foreseeable future regardless of who runs it.

You do not set up a transport business and expect to go into profit within a short period. You need new and repeat customer numbers to build critical mass. That takes time.
Report to administrator
+5 #5 rubagakene 2022-09-16 15:47
How come DAS AIR owned by Captain Joe Roy managed to smoothly run a fleet of aircraft using pilots and engineers and only a handful of accountants?

The Government should seek some advice from this man if they want to save Uganda Airlines, what do you think?
Report to administrator
+1 #6 Akot 2022-09-16 17:32
Why will Ugandans go for next parliamentary election only to ensure mps continue spitting on electorate?

Wasen't it parliament that ensured change of constitution to make Museveni lifetime ruler?

Without NO to the divisive tribalistic system & UNITY, Museveni will rule with or without presidential election! So why have mps to pretend the one man rule in the inhuman tribalistic system, is democracy with fake mps, fake parliament?
Report to administrator
+1 #7 kabayekka 2022-09-16 19:25
Akot you definitely have a point. The opposition is as well aware of the weakness of this NRM government.

Dr Besigye was singing it for many years. Unfortunately these government agents are very aware also that nothing is going to be done to them. The best that can be done is to cut off the two fingers of these officials as they try to work and pay back this mismanaged funds as soon as possible.
Report to administrator
+2 #8 kabayekka 2022-09-17 11:14
If government cannot run Uganda Airlines, cannot run the marketing of coffee, cannot manage a professional army, the rigging of elections is a normal occurance, and the human rights is a disgrace, what else is it trying to work on until the end of time?
Report to administrator
+3 #9 Ensi eno!! 2022-09-17 15:35
I cry for Uganda! How can such mess be happening in this century when other nations are thinking of settling on Mars??
Report to administrator