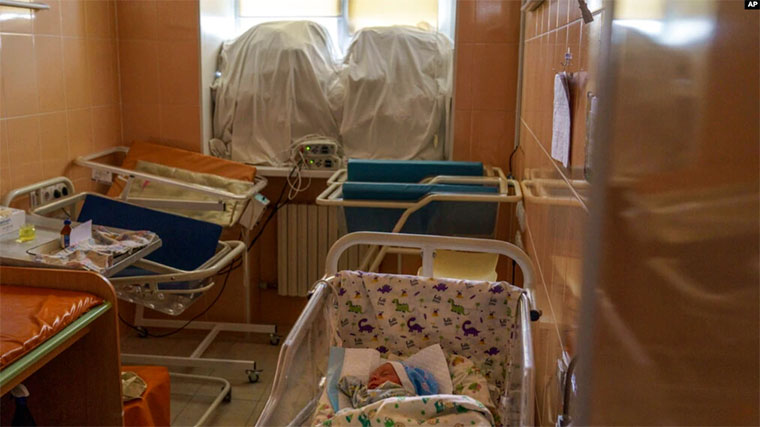 FILE - Veronika, a baby born prematurely at 29 weeks, sleeps in a room fortified with sandbags in the windows at the Pokrovsk Perinatal Hospital in Pokrovsk, Donetsk region, eastern Ukraine

Russia's war on Ukraine has seen scores of hospitals and clinics bombed and frequent power cuts that can turn off lifesaving machines. Now medical aid groups are using a Kenyan-manufactured breathing device for premature babies that works without electricity, helping save vulnerable newborns in countries affected by conflict.

Staff at the Jaramogi Oginga Odinga Teaching and Referral hospital in Kisumu, Kenya, say this device — a bubble continuous positive airway pressure system, or bCPAP — brings some relief to those in respiratory distress.

Daisy Okech, a paediatric nurse at the hospital, said the device "helped us a great lot because before we had the machine there were babies who needed the CPAP, but we were not able to initiate. We were just using normal oxygen, but currently, we have seen that there are babies who improve very well when we initiate CPAP."

The device continuously delivers pressurized oxygen, making it easier for babies in respiratory distress to breathe. Workers say water bubbles in a jar signify that the user is breathing right.

Revital health care, a manufacturer in Kenya's Kilifi County, and the US-based Vayu Global Health Foundation took on mass production of the devices this year. Revital’s technical director, Krupali Shah, said the bubble CPAP just needs a pressured source of oxygen, such as a cylinder, to function.

“Once you have continuous 100% oxygen flowing in the blender, which is where the magic of the entire device is and is, literally, where the magic happens, it's able to pull ambient air from the outside as well," Shah said.

"You can adjust the oxygen concentration between 30-100 before delivery to the baby. The blended air can be filtered, humidified, breathed in by the patient and breathed out. There is also a pressure generator jar which controls the pressure and keeps the baby's lungs open."

In August, the World Health Organization acknowledged that at least 25 facilities across Ukraine, 17 of which are perinatal centres, were using the bubble CPAPs provided by donors. Officials say the device provides a non-invasive way of supporting newborns who are struggling to breathe. Doctors say oxygen blenders prevent lung and brain damage while giving babies pure oxygen.

Its inventor, American doctor Thomas Burke, told VOA that investing in the health of vulnerable newborns is key to controlling infant mortality.

“People actually have to make budget commitments, and it means that health systems have to prioritize babies," Burke said. "I found in my 2½ decades of work on maternal health that there is sometimes a lot of talk around saving mothers' lives, but at the end of the day people aren't willing to put finance behind saving mothers’ lives.”

The bCPAP devices are available for about $400 in Kenya. The system is being used in at least 20 countries in Africa, as well as Belgium and the United States. Nearly 1 million infants die annually from respiratory problems in low- and middle-income countries, according to the World Health Organization. Advocates say more of the lifesaving machines are needed around the world.