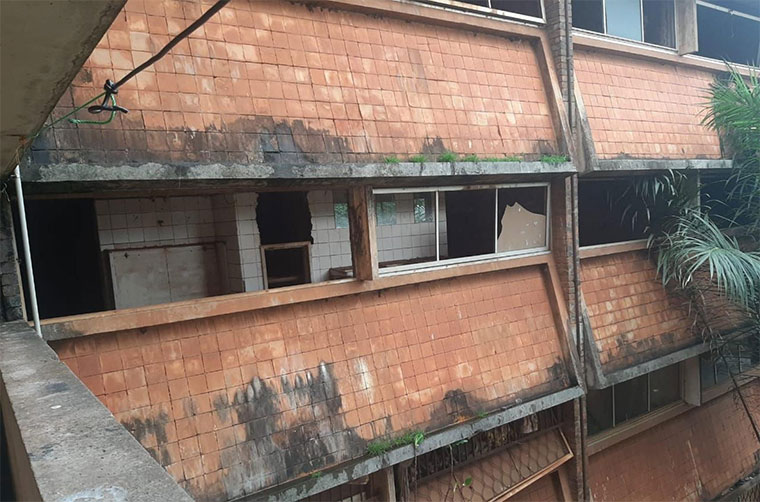 Makerere University vice chancellor Prof Barnabas Nawangwe has ordered all students residing in the dilapidated Lumumba hall of residence to immediately vacate and pave way for its renovation.

A section of students had stayed in Lumumba hall to finish their recess period, but in a letter dated September 12, Nawangwe ordered that all students who are still in the hall be relocated to other halls of residence.

“The purpose of this letter is to communicate to you the management’s decision and guide as follows; Lumumba hall should be closed with immediate effect to pave the way for renovation. Government-sponsored continuing students currently accommodated in Lumumba hall should be relocated to the other halls of residence,” part of the letter to the dean of students reads.

“By copy of this letter, the chief security officer is requested to secure vacant possession of Lumumba hall to pave way for smooth handover of the premises to the contractor,’’ another part of the letter reads.

Nawangwe further said that said the decision was taken after a meeting by the university's central management committee. Some of the students who remained behind to accomplish their recess period as required by their respective courses will now have to leave. When our reporter reached Lumumba hall, some of the students had vacated the hall while others were still keeping around.

Speaking to URN, one of the students called Jonathan Opolot doing a bachelors of medicine and surgery said the relocation came with some complexity because rooms at the University hall already have occupants. He explained that the occupants of the rooms at University hall left behind a lot of property, leaving very limited space to accommodate those who are being transferred.

For many years, several concerns have been raised about the state of halls of residence at the university. In 2019, MPs on the education committee during their visit to the university as part of the probe over the impasse at Makerere that saw two weeks-long student protest against the 15 per cent cumulative tuition increment, were shocked over the poor state of the students’ halls of residence on campus.

The MPs noted that the students’ halls of residence are dilapidated and recommended a complete renovation. In Lumumba hall alone, 'Block C' has been closed since 2006 when it was cordoned off due to its poor state, but its renovation has been pending up to date. Before its closure, it was accommodating close to 200 students.

According to the university website; “the hall accommodates about 752 students, with 241 double rooms and 2 open blocks.”

Lumumba hall which was opened in 1971 and is one of the nine halls of residence that Makerere has - of which six are for males and the remaining three are for females.

Too much talking without action.
Elitism that has nothing productive to show on ground.
Report to administrator
+1 #2 kabayekka 2022-09-16 03:17
One wonders what renovation means for such a very big residential property in the middle of the city. As it is raining cats and dogs in Kampala, the first construction point of attack on these old buildings should be the City sewerage system in the hope that much of it does not end up in that surviving big water body of Lake Nalubaale.
Report to administrator
+4 #3 Zaitun 2022-09-16 16:09
What a garbage! It is hard to believe that the building in photo is that once nice Hall of residence where sons of Naphtali Gongom were living.

Do the likes of the Vice Chancellor, Museveni the President, and his wife- the Minister of Education stay in such buildings?

How dare you keep students living in such a structure, and I am sure with rats, bats not talking of drones of mosquitoes- simply with health hazzards!

Instead of talkng of renovation, why not rase off the whole structure and build a new one in its place so that money is properly allocated?

These gangsters of liberators had one thing in common- loot and destroy the country bones and introduce poverty and suffering in Uganda.

Look at them today- all millionaires and billionaires in dollars while building their home country- Rwanda even those who were below poverty level.
Poor but cursed Ugandans!!!
Report to administrator
+3 #4 sula 2022-09-16 21:38
Well said Zaitun. It hurts , It Pains .Block C closed since 2006. Oh God !

Some of us stayed in this hall.And it will always remain at the bottom of our hearts.
- If m7 and bushmen leave us soon, we shall mobilse and rebuild our hall as OB'S
Report to administrator
+4 #5 Ebmok 2022-09-16 21:44
If an entire university that boasts, "We Train For The Future" and apparently wants to be recognized among the best in Africa, waits until a simple housekeeping matter becomes headlines, what kind of leadership do they have?

What kind of leaders are they training? What vision of Uganda's future do they have, surely?
Report to administrator
0 #6 Lakwena 2022-09-19 08:23
What about the eyesoring Mary Stuart Hall falling apart next door? What about the embarrassing and deplorable Staff apartments and Housing scattered in the four corners of the University Campus?

In other words e.g., the University's Spectacular Main Entrance (Gate) is not reflecting what is within the Campus. Blame Queen Elizabeth (RIP) and the Brits colonialism for the decadence and neglect of public institutions in their former colonies.

Otherwise, if it is not the culture of poverty and backwardness; what is it with our failure in "priority test" to e.g., strictly and honestly budget for depreciation (maintenance)?

It is sickening and bewildering because, even the cost of renovation is exaggerated (rigged with enjjawulo [corruption])
Report to administrator
0 #7 Lakwena 2022-09-19 08:45
For Heaven's sake, the State/National Universities is the face of the country!

At National Level, unrestrained self-service to public resources (Other people's Money [OPM]), the decadence and neglect at the expense of Public Good is debasing.

E.g. instead of finishing the new Parliamentary Chamber in time: even when the ones used by former Speaker, Kadaga had not clocked the mileage of 10,000 Kilometers; the current Speaker and her Deputy were congratulated with over Shs.2 billion worth of State of the Art Mercedes Benz, which even the German Chancellor and his Cabinet Ministers do not know how these Model of Mercedes Benz look or feel like.
Report to administrator