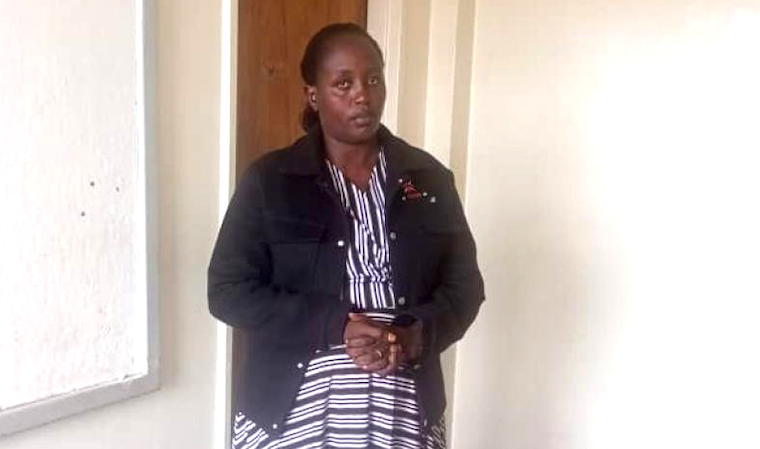 In the video that started trending on social media about five days ago, Unaneza is seen pretending to be trying out a pair of shoes as a potential buyer. The shop owner who has since been identified as Sarah Mugerwa quickly runs to attend to her perceived customer.

But Unaneza utilizes the chance when Mugerwa’s mind was focused on fitting the shoe onto her foot to stretch out her hand into the handbag which was behind the counter to pick the money.  Unaneza then pretends not to have liked the shoes and quickly walks out. It took almost an hour for Mugerwa to notice that her money had been stolen.

The incident took place at Pentagon plaza which is located at the former Qualicel Bus park opposite the New Taxi Park. The shop attendant opened a case at New Taxi Park police post and later on at CPS. Mugerwa indicated that the bundle of money that was stolen by Unaneza had Shs 1 million.

“I had just counted the money and was planning to bank it. I was shocked when it disappeared in my presence. I was forced to check the CCTV cameras until I noticed that it is this woman I had helped to try out one of the pairs of my shoes that had stolen my money,” Mugerwa said.

When she was being interrogated at CPS, Unaneza denied ever having been at Pentagon Plaza until a video was played for her. After watching the video, she went mute and never answered any further questions until she was led to the cells.

Patrick Onyango, the Kampala Metropolitan police spokesperson, said Unaneza was picked at Buganda Road Magistrate's court following a tip-off. Police checked its records and noticed that she was earlier arrested by another police post in downtown Kampala.

“We have noticed that Unaneza is a serial shoplifter," Onyango said. "She was at Buganda Road court over the same offences which CPS was not aware of. We are now going to charge her for shoplifting before this week ends,” said Onyango.

By press time, police were collecting information that Unaneza has shoplifting and theft cases at among other police posts Nakivubo, Kisekka New Taxi Park and at the Old Kampala divisional station. Police said they need to collect all this evidence so that Unaneza can be given a stronger sentence which will keep in jail "for some good years".

Jane Unaneza, the woman captured on CCTV footage shoplifting in downtown Kampala has been arrested. Unaneza stole over Shs 1m from Sarah Mugerwa's bag while she helping out to fit new shoes. Police says Unaneza is a serial shoplifter with several pending theft cases pic.twitter.com/hApxsVqH53

+9 #1 A K Mukasa 2022-09-15 18:35
Must be Museveni’s illegitimate daughter. Apple doesn’t fall far from the tree!
Report to administrator
+3 #2 kabayekka 2022-09-16 02:46
Indeed the optical camera is a clear witness. One remembers well what the cameras in the social media saw during the just ended violent national elections in Kenya.