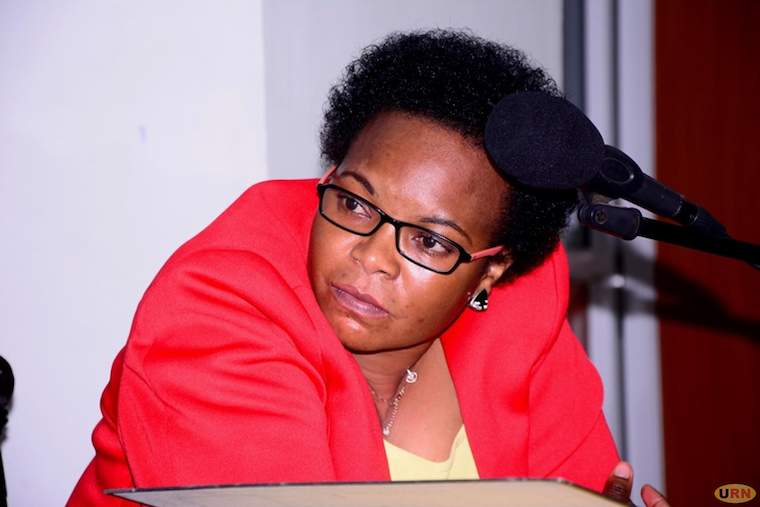 The state minister for Housing, Persis Namuganza on Wednesday walked out on the rules committee of parliament in protest.

Namuganza had appeared before the committee together with witnesses regarding the ongoing investigation into the minister’s alleged questioning of the integrity of parliament.

In May, an ad-hoc committee investigating the giveaway of Nakawa-Naguru land, recommended that Namuganza steps aside for falsifying a presidential directive that led to the Uganda Land Commission (ULC) to allocate the land to a section of investors.

But Namuganza reportedly questioned the treatment of investors and people who appear before parliamentary committees, equating it to a torture chamber. A section of MPs led by Bukooli Central MP, Solomon Silwanyi accused Namuganza of ridiculing parliament and its leadership over the findings. Deputy speaker, Thomas Tayebwa then directed the committee to investigate the minister's conduct.

Appearing before the committee for the second time, Namuganza maintained her stand of not making any response to the allegations against her. She informed the committee that she had petitioned the speaker, Anita Among, and the deputy speaker in regard to unfair treatment by the committee.

She told the committee that any allegation against her should be backed by evidence in form of documents or recordings, which she would require prior to her formal response to the committee. Namuganza said that she was waiting for the speaker’s response to her petition before she makes any statement regarding the allegations against her.

"Mr chairman, you summoned me here by your powers under Article 90 of the constitution of the republic of Uganda. Mr chairman, the same article 90 gives you powers to order the production of documents by any witness. I, therefore, pray that the witnesses be ordered to produce and supply copies of supplementary evidence of whatever nature they intend to rely on and this is a requirement of fair hearing. If they don't have any let them inform me..." she said.

Charles Onen, the rules committee vice chairperson said that the witnesses were expected to present evidence through their testimonies and that the minister was free to cross-examine them. However, Namuganza insisted that evidence needed to be tabled first.

Bosco Okiror, the Usuk County MP said that no evidence had been provided to the committee but asked the minister to first listen to submissions by the witness and that if no evidence is availed, it would be to her advantage.

But Namuganza walked out of the committee and accused the MPs of declining any submission from her lawyer and failure to follow procedures. After the minister’s walkout, four MPs who are witnesses in the matter made submissions to the committee.

Silwanyi, failed to present any evidence in regard to allegations that Namuganza had put the institution of parliament in disrepute. Silwanyi said that the minister had questioned the integrity of parliament through statements made in a WhatsApp group of MPs of the 11th parliament.

However, Laura Kanusu, the national PWDs representative tasked Silwanyi with the particular rule of procedure that the minister had violated.

"Under what rule were you raising? Don't talk about 190 because that talks about the power of the speaker. So in your view and in your understanding, what rule relates to the misconduct of a minister were you raising upon. But also in your understanding if a member goes to a forum which is a forum for a member of parliament where we discuss issues and those issues cannot be issues of parliament. They are part and parcel of the work we do as parliament. Are you telling this committee that we have no right as members of parliament to make any comments on the procedures of parliament whatsoever?" said Kanusu.

Silwanyi sought more time to present the rules in breach to the committee. The committee then tasked Silwanyi to present evidence in regard to his allegations on Thursday.

Sarah Opendi, the Tororo Woman MP presented to the committee printouts of messages that the minister allegedly posted in the Whatsapp group. Opendi said that the actions and conduct of the minister were contrary to those expected of MPs.

Elijah Okupa, the Kasilo County MP said that Namuganza should have sought better platforms to address her concerns than going to social media. His sentiments were also shared by, Maurice Kibalya, the Bugabula South MP who said the behaviour of the minister was wanting.

1. Does the Parliament of Uganda act honestly with strong moral principles?
2. Do Ugandans have the right to question the Integrity of Parliament?

These guys seem to be high-handed and on petulant issues; they're like small gods who dare not be questioned?!

It's a waste of our resources instead of holding people / institutions to accountability with government funds flowing everywhere and embezzlement rife in untold proportions. Instead, parliament is forming useless quora to pick chicken fights.
Report to administrator
+3 #3 kabayekka 2022-09-15 13:44
She seems to have succeeded in confusing this money minded house so that she can get off scot free from her own money she ate in the lucrative Nakawa land deal. Craft NRM woman politician!
Report to administrator
0 #4 Akot 2022-09-15 14:00
Quoting Henry Baisi:

1. Does the Parliament of Uganda act honestly with strong moral principles?

2. Do Ugandans have the right to question the Integrity of Parliament?

Uganda belongs to Museveni who controls every institution, so, parliament works for the owner of the fake country!

Ugandans are powerless tribally divided ruled, will go go for next fake presidential, parliamentary, local elections to ensure Museveni's lifetime rule & transfer of power to his son in waiting!

Migrant Museveni must really be happy!
Report to administrator
+2 #5 Miko 2022-09-15 16:10
I am no expert on the rules of the Parliament. As a general rule MPs are protected, when speaking in the House, against any civil actions e.g. when they make defamatory statements by virtue of the defence of Privilege.

However, statements made outside the House are not protected. My guess is that her posts in a WhatsApp forum, even though exclusively comprised of MPs, is not afforded the defence of privilege.

Ergo any statements made that impugn Parliament’s propriety seem to me to be actionable if they bring disrepute to the authority of Parliament. Why this circus about specific rules beats me. The issue should be could she be sued for libel in respect of the posts?

If the answer is yes, she should be held responsible and defend a charge of misconduct in bringing Parliament into disrepute and ridicule in the eyes of ordinary Ugandans. There are many professions where a person can be suspended by its governing body for bringing the profession into disrepute. Why not Parliament?
Report to administrator
0 #6 Akot 2022-09-15 19:31
Ebmok, agreed,

Without NO to the tribalistic system & UNITY, Museveni is going no where, but will rule with or without fake presidential election!

No one can froce Ugandans to become ONE people & UNITE to block & show Museveni out, especially as they have no common goal nor National Leadership!

It's Ugandans who ensure continuity of the useless govedrnment, so those in posts will do what they can to ensure their pays, while ensuring Museveni doesn't get mad at them!

Museveni has reduced Ugandans to beggers, thieves, enemies of one another... while he rules, owns tax money, controls every institution, including parliament!

The only difference between Museveni & Putin is that the Uganda chief tribal leader is a migrant that Ugandans can get rid of in UNITY, if they want him out!

King Charles lll got the throne at 73 years old!

How old will Museveni's son be when his dad dies of old age & leaves him the post in the family business/herigate?
Report to administrator
0 #8 WADADA rogers 2022-09-15 21:57
I cant wait for the day she will walk out on a judge or magistrate in a criminal case. I think she has picked on the habit of being arrogant, may be that is what they learnt during induction
Report to administrator
0 #9 Henry Baisi 2022-09-16 15:49
....continuing the discussion, there have been numerous incidents involving MPs receiving money in seemingly dubious circumstances so they can pass this or that.

Would you say that is a sign of a Parliament that acts with integrity, please?
Report to administrator
0 #10 Lakwena 2022-09-19 07:52
Only those with horned godfathers and on the Payroll of vicious mafias, brainlessly walk out on a constitutionally instituted committee.

A former nobody Namuganza of this country derive their self-importance and bravdo from somewhere else (evil).

In other words, only after they have been used, abused and dropped; that's when they wake to the real world of being a former nobody after all.
Report to administrator