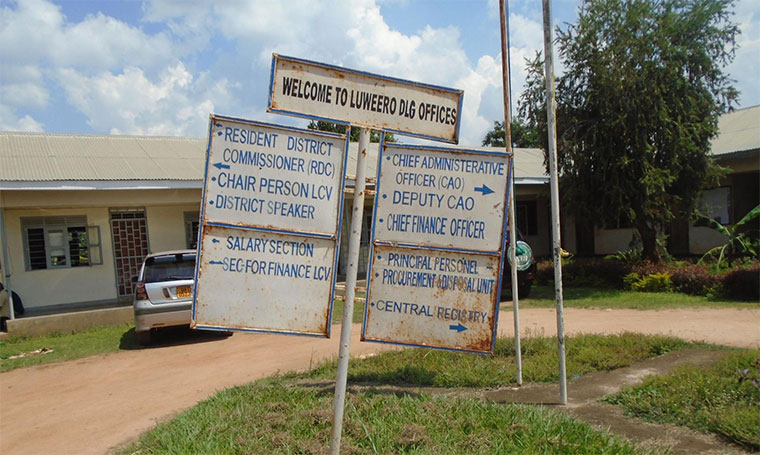 The High court has ordered Stanbic Bank Uganda to unfreeze the accounts belonging to Luwero district. The order was issued Wednesday by Mastula Mulondo the assistant registrar of the High court commercial division.

In 2014, Busenvi Enterprises Limited was contracted by Luwero district at Shs 522 million to construct three access roads; Kagembe-Kawumu-Mawale, Kagugo–Namyeso-Bakijjulula and Mawu-Kasambya all totalling 15.2 kilometers. The roads were constructed under the District Livelihood Support Programme (DLSP) which run from 2006-2014.

However, the contractor engaged in works that exceeded the contract sum and were not captured in the bill of quantities which forced Luwero district to decline to pay the extra costs. The contractor petitioned the Uganda Institute of Professional Engineers which certified the works and directed Luwero to pay Shs 216 million, and adjudication costs worth Shs 5.2 million.

In 2016, High court judge Anna Mugyenyi ordered the district to pay the costs and 26 per cent as interest per annum. The costs have now accumulated to Shs 639 million. In June, Busenvi Enterprises secured a garnishee order under miscellaneous application number 0647/22 and froze Luwero district account number 9030005822709 held at Stanbic Bank Uganda Limited, Luwero branch so as to force Luwero to pay the accumulated costs.

But, Luwero district through its lawyer, Sowali Katamba, and Claire Kukunda a senior state attorney in the solicitor general's office, also filed a miscellaneous application number: 0940/2022, challenging the garnishee order. Mulondo declared the garnishee order illegal and ordered that be lifted immediately. Katamba said that the execution of the order on a government account was illegal because it contains consolidated funds.

“Their demands still stand but for us, we successfully challenged the procedure used to recover the money,” Katamba told URN.

Erastus Kibirango the LC V chairperson Luwero district says that unfreezing the accounts was a huge sigh of relief because it had affected service delivery at district headquarters and in sub-counties. Kibirango explained that although the contract was signed by Luwero district, payments were supposed to be done by the ministry of Local Government which was executing agency of the programme.

The garnishee order paralyzed service delivery both at district headquarters and sub-counties since all funds were attached to the account. Among the activities which are affected include the construction of roads, schools, toilets, health centres, and council sitting for the local governments.

Richard Ssimbwa the LC III chairperson of Luwero sub-county says that since the financial year started, they hadn’t executed a single project nor held any executive or council sitting over the garnishee order on the accounts.

“We had a lot of pain in collecting local revenue from residents and depositing it at the account but we couldn’t withdraw it to perform a single project over the order on the account. We are happy that the accounts have been unfrozen and ask districts to immediately release funds to sub-counties to execute planned projects,” Ssimbwa said.

Busenvi Enterprises is yet to respond to the ruling.

However, the district officials need a serious rethink of their stubbornness in refusing to honor court orders to compensate the contractor how this is not only costing us the citizens, but also the faith of business operators and the future of our country given that our children inherit certain systems. In this regard, I deem it madness for this stubbornness.
Report to administrator