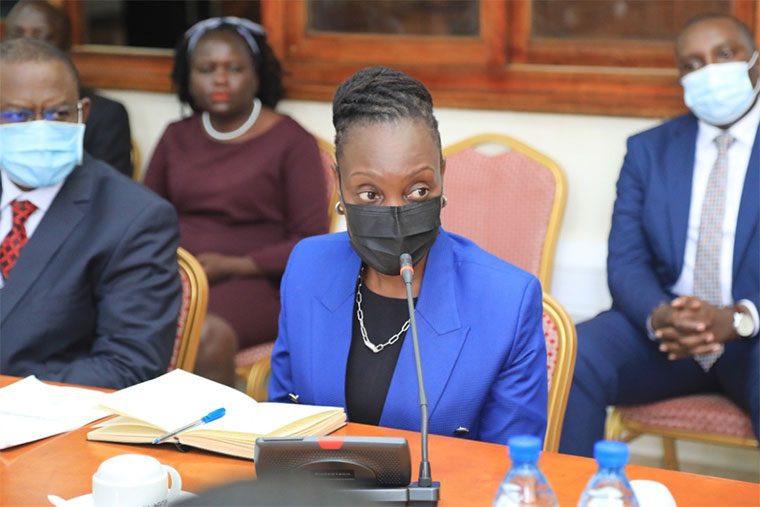 Uganda Airlines boss Jenifer Bamuturaki is in fresh trouble in relation to $12,750 (about Shs 49 million) that she allegedly received as per diem for foreign trips she never took.

Per diem is a fixed daily allowance an organization provides to employees or contract workers to cover travel and out-of-pocket expenses either inland or outside the country. It has emerged that in June 2021, as then acting CEO of the airlines, Bamuturaki generated a requisition for $12,750, which was approved by the permanent secretary in the ministry of Works and Transport to facilitate her trips to 10 destination countries that never materialized.

Bamuturaki was scheduled to travel to the Uganda Airlines offices in Johannesburg (South Africa); Kinshasa in the Democratic Republic of Congo; Juba in South Sudan, Dar-es-Salaam in Tanzania, Mogadishu in Somalia, Zanzibar, Burundi; Kilimanjaro, Mombasa, and Nairobi in the neighbouring Kenyan and interact with the staff there.

However, during a meeting with MPs on the committee of commissions, statutory authority and state enterprises (Cosase), and the airline officials led by Bamuturaki on Tuesday, a copy of the requisition was presented, implicating the CEO for neither travelling nor refunding the money. Joel Ssenyonyi, the Cosase chairperson, tasked Bamuturaki to provide proof confirming whether she travelled or not.

Bamuturaki treated the question with a prolonged silence before she emotionally responded that she will only provide her answers in writing. Ssenyonyi pressed the CEO to be on record and explain the planned trips but she stood her ground insisting that will provide the answers to the committee in writing.

Hashim Sulaiman, the Nebbi Municipality MP accused Bamuturaki of being such an ‘arrogant’ and ‘big-headed’ public official who is targeting to undermine the committee under the disguise of being ‘untouchable’ because she is a presidential appointee.

"Stop being arrogant whether you have protection from anybody - even the president of Uganda. He's our president, we shall tell him if indeed is the one protecting you. I want to be on record on this because we get the facts from the auditor general's report. If it's true that it is the president protecting you, maybe that is why you're big-headed. So the president should be stopping everything parliament is doing? So if there is somebody in government protecting you to come and start undermining us here, then it will not happen. Chair am even getting annoyed, I may even get out," said Sulaiman.

Bamuturaki is facing an integrity probe relating to influence peddling, conflict of interest, and flouting procurement guidelines when she recommended the Kenyan-based Abbavater Media Agency that belonged to her close associate to undertake public relations for Uganda Airlines worth Shs 1.537 billion instead of Shs 654 million.

Bamuturaki is also on the spot for the alleged lack of academic qualifications after she was irregularly appointed by the president in July. The Shs 195 million official recruitment process initiated by the airline's board through PriceWaterhouseCoopers (PwC) failed to come to fruition despite the fact that 40 candidates had applied for the CEO position.

Bamuturaki and her top management team including company secretary Bisereko Kyomuhendo, Paul Turacayisenga and the director of finance, and the internal auditors among others had returned to face the Cosase for the fourth time after two weeks of a break.

The Auditor General's report implicated the airline's management for implementing 25 procurements outside the approved plan for the FY 2020/2021. For instance, the direct purchase of vehicles worth Shs 103.2 million for the airline's office in South Sudan.

In the report, the Auditor General also queried the entity’s property and equipment management after Shs 1.127 billion was spent to purchase different assets, and yet the assets were not engraved to give them identification numbers and couldn't be traced in the assets’ registry.

Further, the Auditor General reported that Dairoo Air Services (DAS), an air cargo airline at Entebbe that operated all-cargo services had billed Uganda Airlines $43,105 (Shs 164 million) for unpaid ground rent but a review of their invoice indicated they were paid only $8,620 (Shs 32.8 million) in April 2021.

If she has offered an explanation in writing, then she ought to be put to a certain time line on this and it will definitely uncover more worms.

But, it's clear there's really no control over funds flow and certainly no proper accountability. The issuing officier too needs questioning because they too must account for funds they issue!
Report to administrator